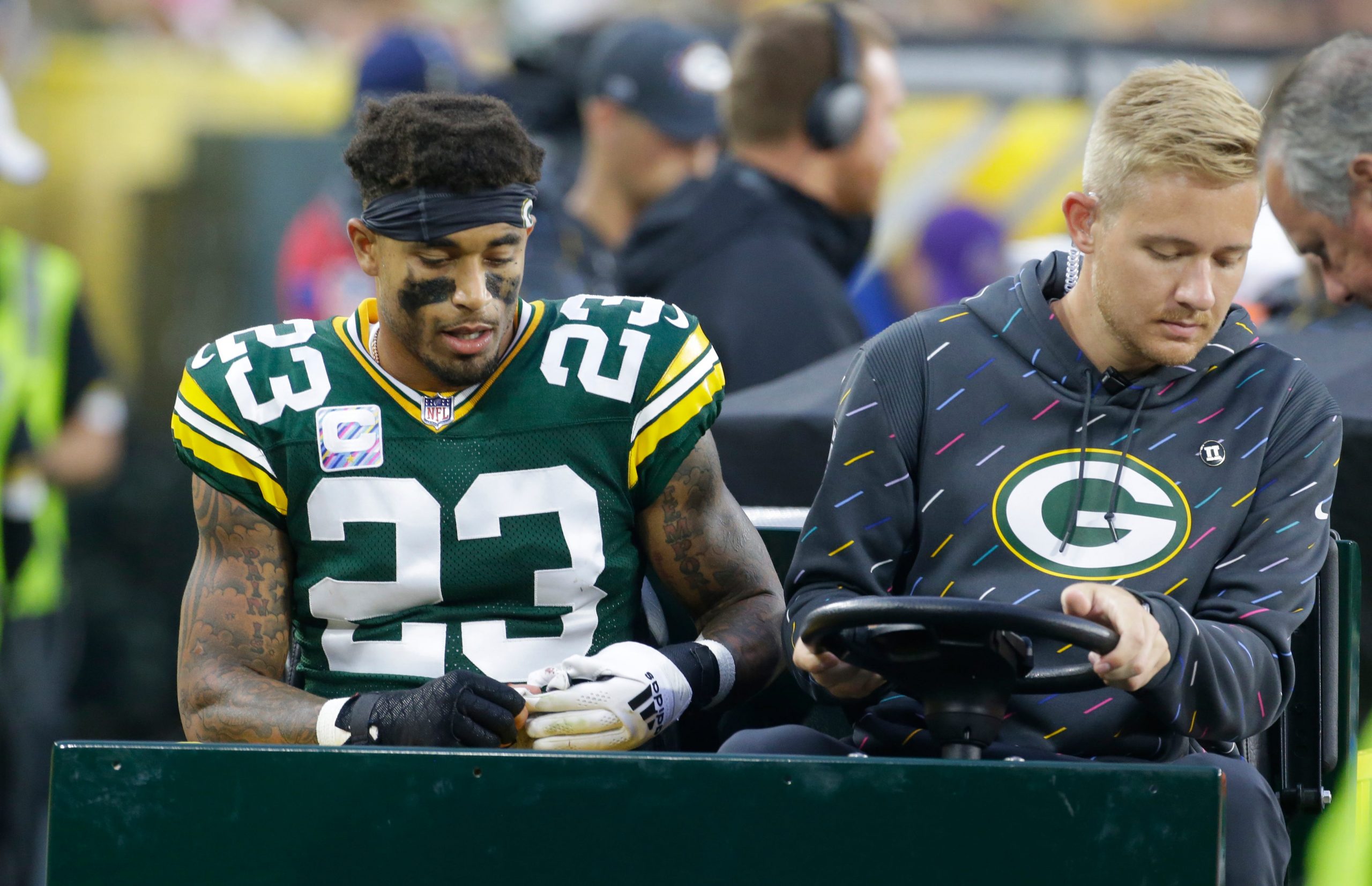 The Green Bay Packers have won three straight games after their Week 1 embarrassment against the Saints. The winning streak puts the Pack at 3-1 and in sole possession of first place in the NFC North. The wins are even more impressive when you figure in the damaging injuries the team has been dealing with in recent weeks.

On Sunday, the Packers only added to the list of key injured players. Pro Bowl cornerback Jaire Alexander suffered a shoulder injury late in the third quarter when he tried to tackle Steelers running back Najee Harris on a fourth-down play. Alexander was carted to the locker room and did not return to the game.

Alexander is by far the Packers best cover corner and he’s one of the premier pass defenders in the league. The Packers are waiting on the results of additional tests to determine how severe the injury is although the preliminary indication reported by NFL Network’s Mike Garafolo indicates it’s an AC joint injury. Those usually don’t require surgery. In the best case scenario, Alexander may not miss time. He could also miss as many as six games if the injury is more serious.

“Obviously, he’s a guy that’s really important to us, just one of the premier corners in this league. So certainly we’d like him to [be OK],” head coach Matt LaFleur said after Sunday’s game. “Hopefully, it all checks out well and he’ll be back with us.”

LaFleur had no updates on Alexander at his Monday afternoon press conference.

There would clearly be a big drop off at corner if Alexander misses significant time. Kevin King has missed the last two games and is still in concussion protocol as of Monday. At the end of the game against Pittsburgh, the Packers had rookie Eric Stokes and Isaac Yiadom at boundary corner with Chandon Sullivan playing in the slot. Rookie fifth-round pick Shemar Jean-Charles also saw some action on defense for the first time in his NFL career, getting in on six plays late in the game.

Both Yiadom and Jean-Charles struggled in coverage during the preseason and the Packers would have significant issues if either of them had to see extensive time on defense Sunday against the Bengals.

The Packers defense has already been hit by several key injuries. The Packers best pass rusher, Za’Darius Smith, saw only limited action in Week 1 before going on the IR with a back injury. Za’Darius has had surgery on his back and the Packers are unsure if he’ll be able to play at all this season.

Preston Smith went down with an injury in the first quarter against Pittsburgh but was able to return to the game and was able to play 36 snaps by game’s end.

Inside linebacker Krys Barnes missed the Steelers game after suffering an injury early in the 49ers game. Oren Burks and Ty Summers both saw action at ILB opposite De’Vondre Campbell in Barnes’ absence.

The offense has also been hit by injuries to key personnel. The Packers have been without starting left tackle David Bakhtiari since the start of training camp. He is still on the PUP list and must miss at least two more games minimum before he can resume practicing with the team.

Bakhtiari was replaced by Elgton Jenkins who moved from left guard to left tackle and played well for the first two games of the season before he was lost to an injured ankle. That forced the Packers to turn to Yosh Nijman at left tackle against San Francisco and Pittsburgh. Green Bay won both of those games despite being down to their third-string left tackle who was making his first two career NFL starts and Nijman did a solid job although he was given help by running backs, tight ends and receivers on many plays.

The offense had to make adjustments and they did. Matt LaFleur emphasized the short passing game and called more plays that were designed for quarterback Aaron Rodgers to release the ball in 2.5-seconds or less. The Packers also ran the football more often over the last two games with Aaron Jones being more effective against the 49ers while A.J. Dillon got the job done against the Steelers.

The Packers also lost starting wide receiver Marquez Valdes-Scantling after the 49ers game and so Allen Lazard and Randall Cobb stepped in with Lazard coming up with a big catch early and Cobb making key catches on third down and grabbing a pair of touchdown passes against the Steelers.

The Packers have dealt with other injuries as well. Defensive lineman Tyler Lancaster is now on the Covid-19 reserve list after he enjoyed one of his best games in recent memories. Tight end Dominique Dafney was also placed on the IR which cost the Packers a blocking tight end/H-back.

Before the season started, I wrote an article about the five players the Packers could least afford to lose to injury. You can read that article here. The Packers have already lost number two and number three on that list and yet they have found a way to continue to win football games.

Every NFL team deals with injuries over the course of a season. Championship teams find a way to win despite the injuries they suffer. The Packers were able to do that in 2010. Thus far this season, the team has found a way to keep on winning despite these key injuries. However, the loss of Alexander may be the biggest test this team has faced yet.