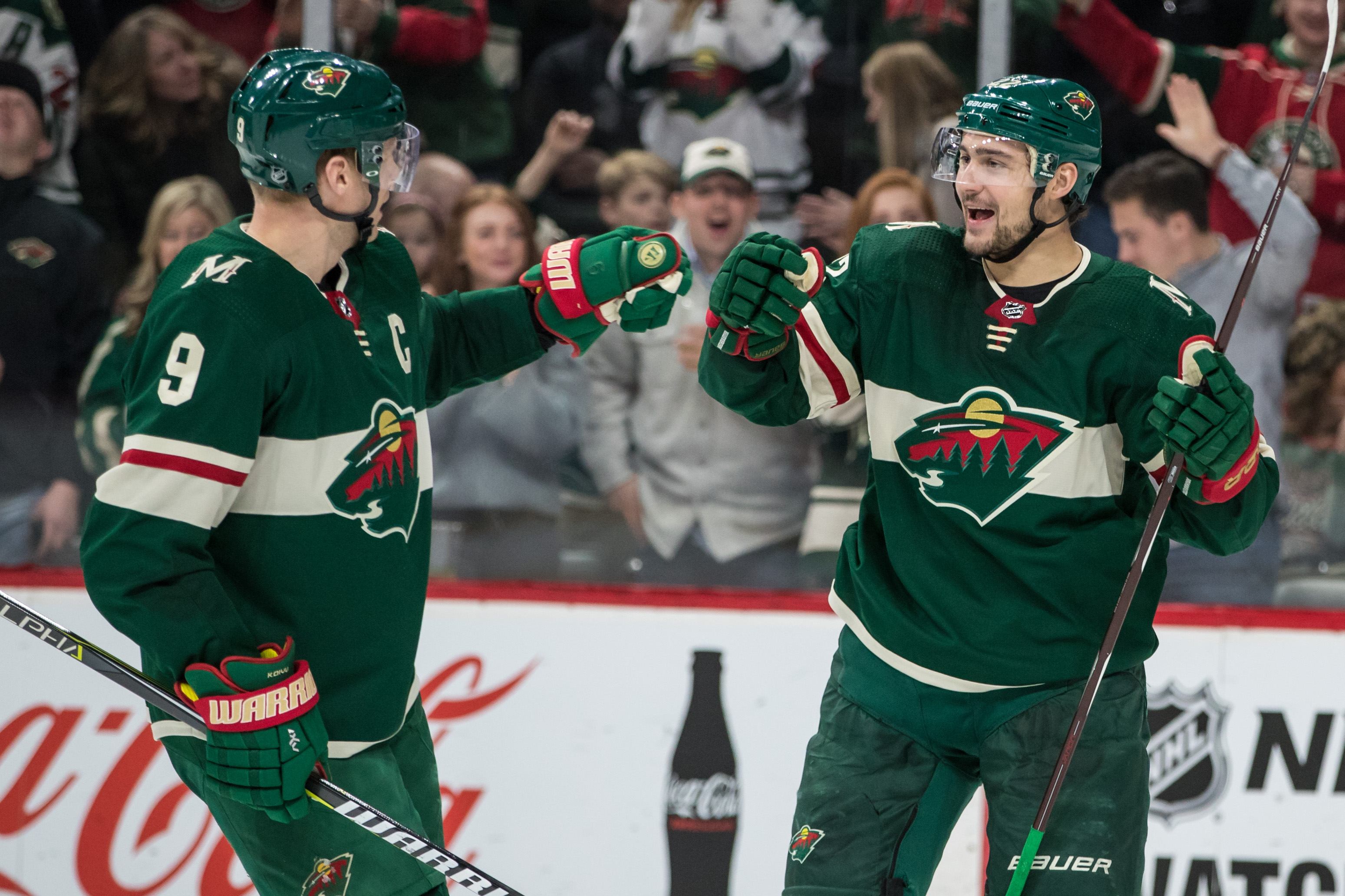 With all due respect to Casey Mittlestadt, the best high school player to ever come out of Minnesota is the current bench boss of the Buffalo Sabres Phil Housely.  In 1982, he did the unthinkable and entered the NHL as an 18-year old kid fresh out of South St. Paul High School and was one of the top rookies in the league where he finished with 17 goals and 66 points.  Now he’s trying to lead a talented but dysfunctional club from the league basement and its been pretty rough through the 1st half of the 2017-18 season.

He’s demonstrated he can be a great coach, winning a gold at the World Junior Championships and helping shape the Nashville Predators blueline into one of the best in the league.  All of that seems pretty far away now.  Minnesota would be wise to ready itself for a battle as the hometown hero Housely returns to St. Paul for the first time as head coach where he’ll no doubt want to earn a win over a club that passed on signing him at the tail end of his career.  Will Housely get the best of the Wild or will Minnesota play to its ability and take care of business?

1st Period Thoughts:  Minnesota got out to a fast start as they would light the lamp a little over a minute into the game as Mikael Granlund sent a pass from beneath the goal line into the slot where Nino Niederrieter was there to get off a quick shot that beat Robin Lehner.  1-0 Wild.  The Wild would continue to pour it on albeit from an unlikely source as the 4th line would strike as Daniel Winnik raced up through the neutral zone, dangling around a defender and as the Sabres defense backed off from Winnik the former University of New Hampshire star wound up and unleashed a slap shot that went top shelf behind Lehner.  2-0 Wild.  With the crowd roaring, the Sabres seemed to get the wake up call and the Wild spent a few tense minutes scrambling in their own end as Buffalo peppered Devan Dubnyk with shots.  Buffalo was sending 3 players deep in the Wild zone and really hoping to answer back with a goal of their own, but Minnesota stayed calm and weathered the storm and was able to work the puck in the Sabres zone.  Maybe feeling a little frustrated at their lack of progress but Rasmus Ristolainen would take a vicious run at Mikko Koivu where he elbowed the Wild captain in the face that left him with a nasty cut.  Ristolainen would get a 5-minute major and a game misconduct for the hit which was well deserved as he left his feet on his lunge to Koivu’s face.  Koivu would return to the Wild locker room to get stitches presumably and would not be on the ice for the rest of the period.  On the 5-minute power play the Wild tried moving the puck quickly but some of their player movement made it easier for the Sabres penalty killers to get into passing lanes and they were able to kill about half of the man advantage off with very few shots being directed towards Lehner.  Minnesota would manage to light the lamp on the power play as Jared Spurgeon fired a shot from the point that was redirected on goal by Charlie Coyle that drew a rebound and Niederreiter would pounce on the puck and fire it by Lehner.  3-0 Wild.  The goal seemed to refocus the Wild and they began to dominate the pace of play and they had a few quality chances late in the period that Lehner had to fight off.  It will be interesting to see if the Wild can keep their foot on the gas in the 2nd or will they ease up and maybe give the Sabres a chance to get back in the game.

2nd Period Thoughts:  The Wild picked up where they left off in the 1st period where the Wild continued to outwork the Sabres for loose pucks.  The top line would strike again as Koivu won a battle for the puck along the wall and he he swung a pass over to Granlund who then backhanded a no-look pass to Niederreiter for a tap in goal.  4-0 Wild as Niederreiter tallied a hat trick in his first game back from injury.  As the hats rained down, the Wild got a little extra rest to savor the moment.  The Sabres didn’t seem to have the desire to really push back against the Wild and Minnesota continued to attack and apply pressure offensively.  Minnesota would add to its lead a little past the midway point in the period as Brodin fed a puck to Granlund for the breakout.  After nearly losing the zone, Brodin stepped up and fed a pass to Granlund who then fed a pass into the high slot to Koivu who fired off a quick shot that beat Lehner.  5-0 Wild.  The Sabres tried to counter attack, but the Wild’s defense was not giving Buffalo any time and space and they were fairly easy to shut down.  Dubnyk had little work, but he wasn’t hesitating to freeze the puck.  Minnesota would have a few opportunities to add to their lead on odd-man rushes but unselfishness would thwart the opportunities.  The Wild would strike late in the period on a great forechecking shift by Parise who made a power move towards the net that Lehner stopped but he wasn’t able to reset to stop Coyle’s rebound chance.  6-0 Wild and the home crowd gave the team an appreciative ovation going into the intermission.

3rd Period Thoughts:  The Sabres would swap out Lehner for Chad Johnson.  In the 3rd period, the Wild clearly were wanting to coast and the Sabres were ornery and in search of a goal for pride reasons.  They didn’t have to wait long as a point shot from Zach Bogosian couldn’t be swept aside and the puck was gathered up by Sam Reinhart who turned a sent a shot on goal that beat Dubnyk.  6-1 Wild.  The Sabres continued to swarm in the Wild zone for the next few minutes after Reinhart’s goal before the Wild finally started moving their feet and forcing Buffalo to defend.  The play would start to get chippy in the 3rd as both clubs started to have little scrums after whistles and prior to faceoffs as the Sabres were a little annoyed with the score.  Minnesota flirted with adding a 7th goal, but give Chad Johnson credit as he made a few nice saves down the stretch.  The Sabres would add a goal with about a minute left as a Marco Scandella shot went wide of the mark and carom off the boards and out front that Evander Kane just managed to sneak inside the left post.  Dubnyk wasn’t happy but that would be temporary as the crowd gave the team a small ovation as the rolled to a 6-2 victory.

Dubnyk didn’t have to be great, making 29 saves in the victory.  He had a few moments where the Sabres peppered him with shots, but I felt he got pretty good support from his defense who were taking the body and giving him the opportunity freeze the puck.  The penalty kill was perfect, and in the 1st two periods with the game still in question they did a nice job of limiting the Sabres’ chances.  I thought Nate Prosser and especially Jonas Brodin had a terrific game tonight.

Offensively the Wild certainly seem to have benefited from having Zach Parise and Nino Niederreiter back.  Niederreiter’s hat trick is his 2nd one against the Sabres in his NHL career and it was good to have another shoot-first player in the lineup.  Granlund had 3 helpers and was really the catalyst on that line.  Even though he had just a single assist, Joel Eriksson Ek is playing great and its just a matter of time before he breaks through and starts lighting the lamp.  Minnesota was at times a little too cute with the puck, but overall the team did a good job of applying pressure via the forecheck and swarming in around the blue paint in the 1st two periods.

Its tough to get too excited about this win against a Sabres squad that struggles to defend.  Yet, the team didn’t really let the Sabres ever feel as though they had a chance in this game.  Too often in the past we’ve seen the Wild let inferior teams hang around and believe they can win and at times Minnesota has found themselves on the wrong end of the final score.  This time the team took care of business early and then poured it on in the 2nd.  Winning is always fun, but the Wild will have another tough challenge against the Avalanche in Colorado on Saturday.

LW/RW – Kirill Kaprizov (CSKA Moscow, KHL) ~ last year, the Russian was arguably the most dangerous player at World Junior Championships and this season he’s one of the better players in the KHL.  The youngster hit a bit of a dry patch as of late but he chipped in a helper on Tuesday in CSKA’s 2-1 win over Lada Togliatti.  Kaprizov has 15 goals, 36 points, 10 PIM’s and is a +17 in 37 games.

C – Andrei Svetlakov (CSKA Moscow, KHL) ~ plugging away dutifully on the 4th line, he doesn’t get nearly as many opportunities in the offensive zone but he does have some finishing ability as he had a goal (assisted by Kaprizov) in CSKA’s 2-1 win on Tuesday.  Svetlakov has 7 goals, 17 points, 38 PIM’s and is a +21 in 32 games.

RW – Dmitry Sokolov (Russia, WJC’s) ~ the Russian winger’s tournament came to an end in the quarterfinals as they were bounced by Team USA 4-2.  The Omsk, Russia-native had 6 shots on goal in the loss.  Sokolov finishes the tournament with a goal, 3 points, 18 shots on goal and a +1 in 5 games.

Let’s Play Hockey and MyStateofHockey.com have released the boys and girls HS hockey rankings for both Class A and Class AA as of January 2nd, 2018.  The holiday tournaments certainly saw its share of upsets and thus the rankings have seen some notable changes.  Here are the top 10 rankings for each.