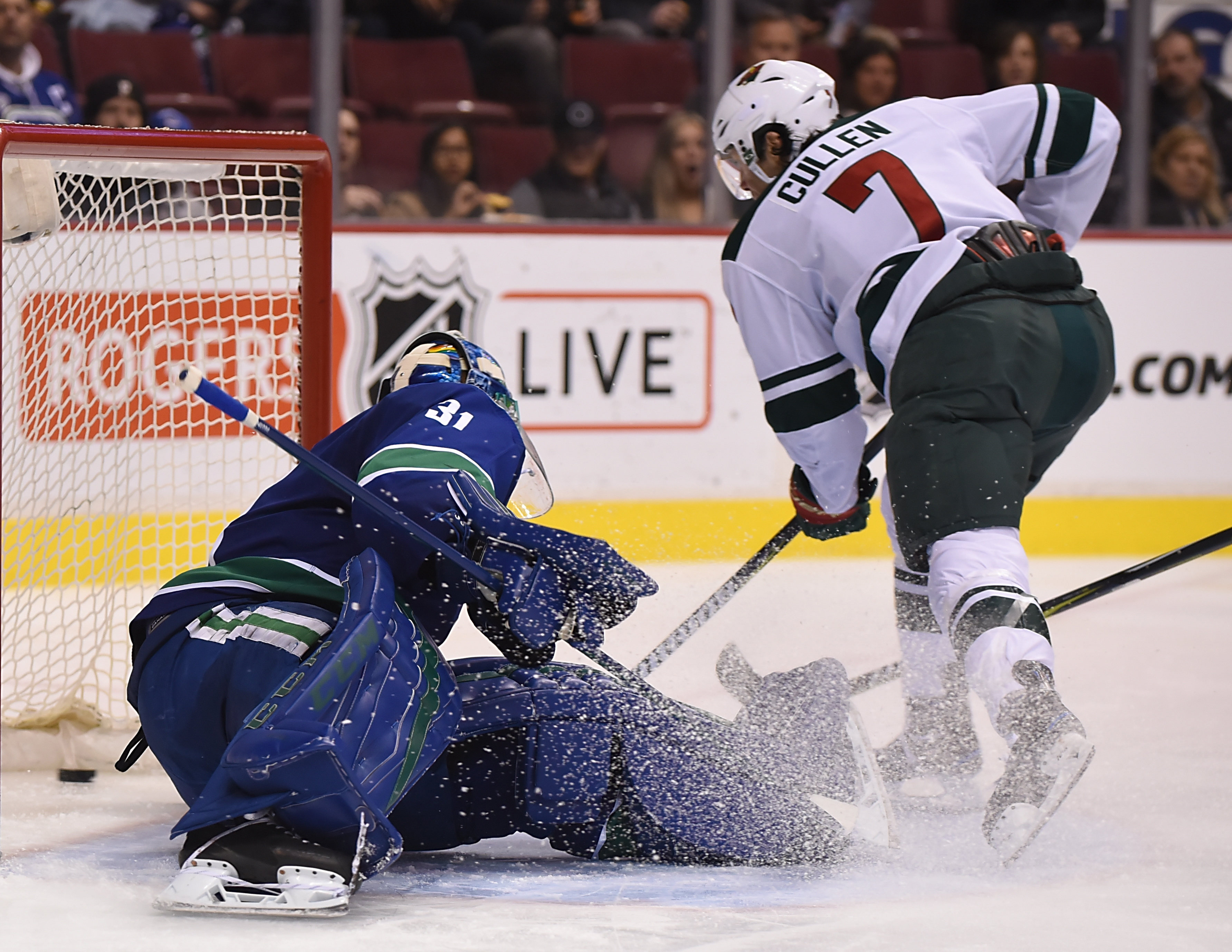 For many hockey fans across Minnesota, their mind might be more focused on the games going on in St. Paul as part of the Minnesota State Boys Hockey Tournament than what the Wild are doing in Vancouver tonight.  The annual ‘Tourney’ is undoubtedly the biggest and most well-publicized event of its kind in the World.  I will admit that I’ve been ‘hooked’ on that tournament since I was a little kid and no doubt I will be listening to the game as I watch the Wild game (and I doubt I will be the only one doing that).

Yet this game is very important.  Minnesota has another opportunity to continue to apply pressure to the clubs that it is chasing in the standings as well as though trying to catch up to them.  Vancouver is out of it, but Minnesota cannot overlook them.  They may be without star rookie Brock Boeser but Vancouver ambushed the Wild 3-2 back in January.  Can Minnesota prevail this time around?

1st Period Thoughts:  The Wild had a few days to rest up prior to tonight’s game, but they appeared to be a bit groggy and mentally sluggish to start the 1st period.  One player who looked a little sleepy at the wheel was Devan Dubnyk who would give up a goal early as Michael Del Zotto would hammer a slap shot on goal that Dubnyk thought he had locked down but he did not and Del Zotto alertly swept up the puck and beat the Wild goalie on the wrap around.  1-0 Canucks.  Minnesota would answer back just 50 seconds later as Nino Niederreiter worked a puck deep in the Vancouver zone and he’d work the puck to Zach Parise who lifted a shot top cheese tying the game at 1-1.  It was a pretty finish from Parise.  Unfortunately the Wild couldn’t seem to capitalize on this fortunate response goal and they’d come dangerously close on a small bunch of occasions.  The first came on a shift by Niederreiter who dangled around a Canucks defender and then tried to wrap a goal around Anders Nilsson but was denied.  A few shifts later it was Marcus Foligno making a similar move before rifling a shot that Nilsson again was up to the task to stop.  The Wild would then get caught overhandling the puck and the Canucks started to tilt the play into the Wild zone.  Vancouver was taking its chances to shoot from anywhere and Dubnyk still looked shaky as he was staying near his goal line and not providing much outward confidence as he appeared to be struggling to see the puck.  Vancouver would appear to take the lead as Sam Gagner crashed the crease but the goal was immediately waived off by the officials but the play would be reviewed.  Upon review it was obvious that Gagner kicked his leg forward and the puck may have gone in on his own had he not kicked it at all, but Minnesota would take the fortunate call.  Minnesota had to feel a little lucky to be tied at 1-1 going into the intermission.  The Wild need to simplify their game with the puck and take what the Canucks are giving them and if they crash the crease they will be rewarded.

2nd Period Thoughts:  In any season, teams need different lines to step up with the top line(s) aren’t feeling it and tonight it was the Wild’s 3rd line that seemed to kind of put the club on its back.  The line of Matt Cullen, Charlie Coyle and Tyler Ennis were Minnesota’s best line using hustle, speed and tenacity along the wall and in the tough areas of the ice to set up a number of quality scoring chances.  Ennis would make a pretty saucer pass over to Cullen for a breakaway bid where the former Moorhead star make a silky forehand to backhand move to give Minnesota a 2-1 lead.  The Wild would sit back as they had the lead and the Canucks would answer back a few minutes later as Erik Gudbranson hammered a low-lying shot that drew a big rebound from Dubnyk that was pounced on by Jussi Jokinen to tie the game at 2-2.  Minnesota would try to go back on the attack and it was again the 3rd line causing havoc but at the crucial point they couldn’t bury it as Coyle set up Cullen for a great opportunity that was snagged out of the air by a wicked glove save by Nilsson.  The Wild would take the lead back late in the period as Mikael Granlund had some time and space and he’d wire a shot that was tapped home by Eric Staal who was camped out near the crease giving the Wild a 3-2 lead on the power play marker.  It was a more dominant period for the Wild, but Dubnyk still looked shaky and a one-goal lead doesn’t exactly feel super secure going into the 3rd period.

3rd Period Thoughts:  I doubt I was alone waiting for the Wild to somehow squander this opportunity for 2 points against the Canucks.  Minnesota seemed more inclined to defend its 1-goal lead than add to it and that normally is a recipe for disaster, especially with Dubnyk proving just about any shot had the potential to go in.  Another shot from Del Zotto late in the period trickled through and luckily for him the puck just settled in the crease before it was swept aside by an alert Matt Dumba.  Dubnyk continued to fight the puck and Minnesota scrambled to help out their struggling goaltender by blocking shots and more than a few times they bailed him out as Mikko Koivu stepped in front of a shot to save his goalie’s bacon.  While at times the Wild’s effort was a bit chaotic, they kept their feet moving and avoided putting Vancouver on the power play.  Minnesota would seal the deal with an empty netter by Charlie Coyle and then with just 13 seconds left, Marcus Foligno added an insurance goal to give the Wild a 5-2 victory.