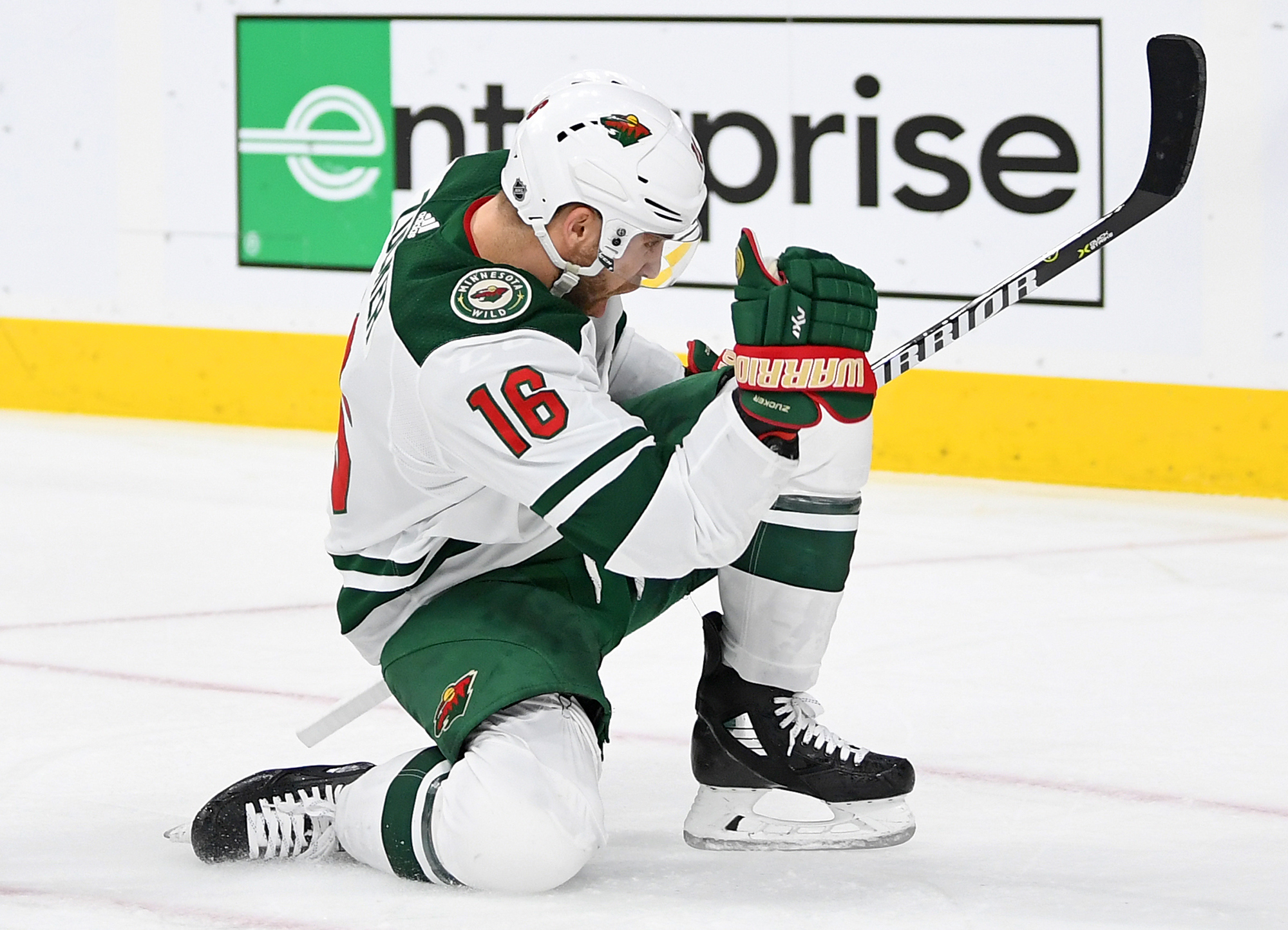 “Bow down before the one you serve, you’re going to get what you deserve,” are they lyrics to Nine Inch Nails‘ Head Like A Hole song.  In a way I kind of feel like the Minnesota Wild ‘got what they deserved after their latest embarrassing loss to Colorado on Tuesday.  The game also marks a transition point in the Wild’s season where many of their next opponents are teams that will likely make the playoffs meaning the road is only going to be that much more difficult.  That starts with tonight’s game against the 1st place Vegas Golden Knights.

Minnesota has had success against Vegas in two home games, but that luck might change in the glitz and glamour that is Sin City where the Golden Knights are even more dominant on home ice than the Wild are at Xcel Energy Center.  Vegas has used the Wild’s lessons as the model for their organization, will the Golden Knights bow down to who they serve or will Minnesota get another (painful) dose of what they deserve?

1st Period Thoughts:  The game had a volume that you don’t see that often in a regular season game.  T-Mobile Arena was amped, but it also had a pretty large Minnesota contingent trying to rally their club.  Minnesota’s top line of Eric Staal, Jason Zucker and Nino Niederreiter worked the puck deep and it was Eric Staal pulling the trigger that drew Marc-Andre Fleury‘s first save.  Minnesota would have another great chance from in close as Charlie Coyle set up Tyler Ennis from close range that Fleury somehow got across his crease to deny.  The Golden Knights would try to impose its will with its terrific team speed and the Wild found themselves on their heels.  Zach Parise would take a holding penalty and the Golden Knights ever dangerous power play would get an early look.  On the man advantage the Golden Knights really tried working pucks and then back out to the point but Alex Stalock was sharp making some nice saves through traffic and Minnesota would escape unscathed.  Minnesota went back on the attack with its top line of Staal, Zucker and Niederreiter who put on a clinic at cycling the puck down low and eventually it was Niederreiter winning a small race for the biscuit down beneath the goal line and he’d send a pass out front to Zucker who hammered it up and over the shoulder of Fleury to a loud cheer from the home crowd.  A strange sort of ovation for an opposing player, but the first Nevada-native to make the NHL and a player no doubt the Golden Knights would love to have.  Still, it was 1-0 Wild.  A few minutes later after the Wild survived another minor push by Vegas, and strangely enough they’d earn a power play as Charlie Coyle dove to clear a puck out of the Minnesota zone.  Tomas Tatar was called for the phantom trip and Minnesota went on the man advantage.  The Wild tried to move the puck quickly for a one-timer but Matt Dumba‘s bid would ring off the post.  Minnesota would end up killing off its own penalty with its own weak call as Parise was tagged for slashing.  The Golden Knights almost made the Wild pay on the man advantage as Stalock appeared to be beaten a few times, but the puck would trickle wide of the net and Minnesota had to feel both lucky and pretty good about holding a 1-0 lead going into the 2nd period.

2nd Period Thoughts:  As good as the 1st period was for the Minnesota Wild, the 2nd was even better.  The Wild were winning most of the races for 50/50 pucks and giving Vegas no chance to build any kind of momentum of their own.  The Wild were simply outworking Vegas at every turn, which is something the Golden Knights are not used to.  They’re used to being in control and driving their opponents crazy with their tenacious work ethic and puck pursuit.  Minnesota would add to its lead as Matt Cullen made a quick move to attack the net where Fluery stopped it but he gave up a rebound that Charlie Coyle backhanded over the shoulder of Fleury to give the Wild a 2-0 lead.  The ‘home’ crowd even treated the Wild to a SKOL chant that seemed to involve almost half of the lower bowl of the arena.  The Wild would add to its lead a few minutes later as the Wild would catch the Golden Knights pinching and move down the ice in a 3-on-1 as Staal set up Zucker who then tried to pass but it was blocked but he stayed with the play and put it back out front where Dumba tapped it home.  3-0 Wild to another ovation from the many Wild fans in attendance.  You could see the frustrating building in the Golden Knights, as Jonathan Marchessault would high stick Dumba in the face and then angrily shoot a puck in his direction after realizing he had gotten penalized.  Minnesota didn’t do much with the power play but the Wild kept applying pressure and hustling to loose pucks and skated into the 2nd intermission a very confident squad.  Ryan Murphy seems pretty calm and poised so far.

3rd Period Thoughts:  The Wild would ease up a bit in the 3rd with a 3-goal lead to protect.  While the Wild were not attacking nearly as much, they were defending with excellent effort as they denied time and space from the Golden Knights.  Vegas seemed to be frustrated by the the constant amount of puck battles they had to fight to have any chance to shoot the puck.  Early on in the 3rd period, Vegas still seemed to be deflated by Minnesota’s relentless effort.  Eventually the Wild would ease up a bit and the Golden Knights would start to cause some chaos in the Minnesota end.  Stalock was having to try to see the puck through a fair amount of traffic in front of his crease but the Golden Knights were missing wide and it was just a matter of time before they finally found the back of the net.  Erik Haula would sweep up a loose puck and fire it by Stalock cutting the Wild lead to two and I think it was the first time we heard the actual Vegas fans all game long.  3-1 Wild.  Minnesota would try their best to muck the game up along the boards and force Vegas to waste precious time battling for the puck along the wall.  Still down by two, Vegas would pull Fleury for an extra attacker and Minnesota did a pretty good job at keeping Vegas to the perimeter for almost a full minute before the Golden Knights were able to start sending a few shots on goal.  The Golden Knights would cut the lead to one, when Ryan Carpenter would cash in on a rebound from in close.  3-2 Wild.  Minnesota would not let the game get any closer as the team was able to free Zach Parise who made no mistake on the empty net to seal a 4-2 victory.

After tough overtime loss last night against Rockford, Iowa had to face an even tougher Grand Rapids Griffins squad the next night.  It did not start out well as former Wisconsin Badgers’ star Ben Street found the back of the net just 14 seconds into the game giving the Griffins a quick 1-0 lead.  Grand Rapids would strike again two minutes later as Matt Puempel lit the lamp and you almost had to wonder if Niklas Svedberg‘s first game back since his 1-game suspension was going to be over before they even hit the 5-minute mark of the 1st period.  But Wild Head Coach Derek Lalonde stuck with Svedberg and the team would try to rally back.  Iowa would cut the Griffins lead in half in the middle of the 2nd period as Dante Salituro scored his first as a member of the Wild as he has spent most of the season with ECHL Rapid City.  The 3rd is where the game really broke open as Iowa would strike 3 times in a span of 2 minutes as Salituro added another and Gerald Mayhew added two more of his own in front of many family members who were at the game in Grand Rapids’ Van Andel Arena.  Iowa would go into lockdown mode after Mayhew’s second tally and Iowa would earn a huge regulation victory.  Svedberg had 30 saves in the victory.

You can see the highlights from this game here.