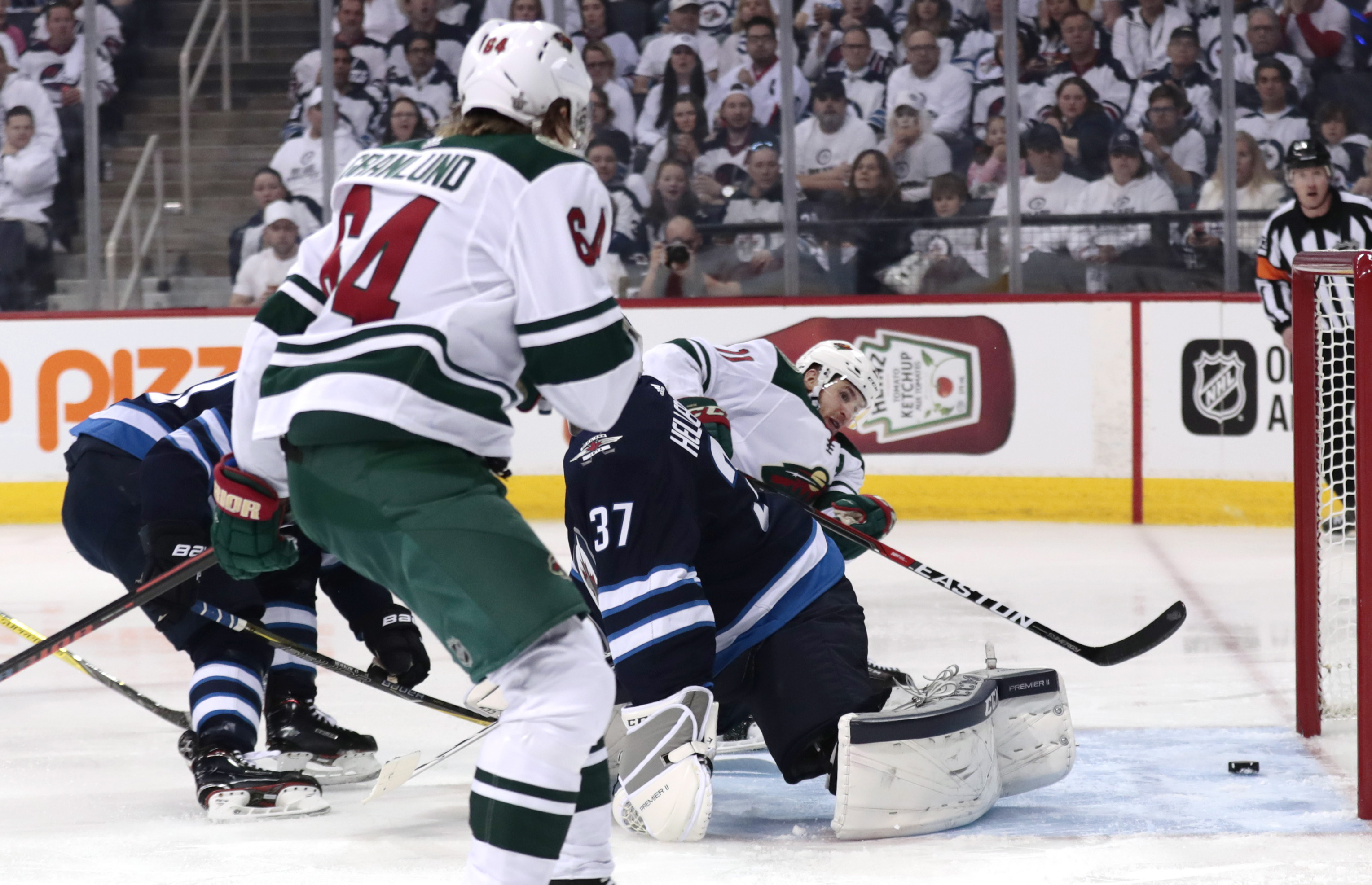 As I start writing this preview, it is just after 10:00am Central Time on Sunday April 15th. Per Michael Russo’s Twitter feed, the Winnipeg Jets have just landed at Minneapolis-St. Paul International Airport. Welcome to April in Minnesota (and Wisconsin where I am), and we’re in the middle of a winter storm. However, I would like to point out, that it appears that Winnipeg is not experiencing the same weather that we are. I know when we were watching Friday night’s game, we were shaking our heads at the sunshine in downtown Winnipeg, yet depending on where you were in Minnesota, you either had freezing rain or snow falling. After Friday night’s loss, the Wild immediately got on a flight back to Minnesota. The Jets first attempted to fly to the Twin Cities on Saturday, however MSP was closed to all flights inbound and outbound. Whether or not the Jets’ flight landed on time this morning, I have no idea. And I’m sure the Jets are glad that US Customs are performed before they even board the plane in Winnipeg (it’s like this if you fly from Toronto to the United States), because it’s one less thing to further delay the team. I’m sure they’re now bound for a quick check-in at the Saint Paul Hotel and then a quick walk across Rice Park and get settled in the visitor’s locker room. How much this compressed schedule will effect the Jets is yet to be seen. It will be up to the Minnesota Wild however to take advantage of it.

Also flying into Minneapolis-Saint Paul International Airport will be members of the Iowa Wild, who wrapped up their regular season in Milwaukee last night. Joining the Minnesota Wild are Kurtis Gabriel, Justin Kloos, Kyle Rau, and Niklas Svedberg. While each of these players brings a particular skill set, it’s strange that Chuck Fletcher didn’t make the call to the Iowa Wild’s top two scorers in Cal O’Reilly and Sam Anas. Another shock, is that defenseman Alex Grant was left off the call up list as well. With Ryan Suter out of the lineup and Jared Spurgeon just returning, it would be a good idea to have another decent defenseman waiting in the wings. Not only that, but a defenseman who can score. Now, it’s a no-brainer to call up Svedberg, because most playoff teams like to have a starting goaltender (Devan Dubnyk), and backup goaltender (Alex Stalock), and a backup to the backup (Svedberg). As to the others, I’m sure they’re in Saint Paul now for a reason. Gabriel brings size and grit. Kloos played well in his earlier call up. Rau has beed decent down the stretch for Iowa and Rau is not afraid to take shots on goal. With the Minnesota Wild struggling to get shots on goal, a player like Rau is much needed. But Rau’s major drawback is his size, or really lack thereof. He’s not going to fare well against players like Dustin Byfuglien.

What needs to happen tonight is clear. First, they need to take advantage of a potentially stiff Winnipeg Jets team. It’s not a terribly long flight between Winnipeg and the Twin Cities, however today’s flight wasn’t their first attempt. They did leave on Saturday but had to turn around at Duluth. So twice, they have gotten in a plane. Planes are not comfortable for anyone, but for taller people, you pretty much have your knees up against the seat in front of you. Then as I mentioned earlier, they just landed this morning. So their normal travel schedule is extremely condensed. And with the “lovely” April weather we’re having, even if they had time, they’re not going to go for a walk to find a cup of coffee to stretch their legs out. They’re going to have to stick with walking and jogging in Xcel Energy Center. And that time is going to be extremely limited. On top of that, they need to find a way to limit Patrik Laine and the rest of his fellow top 5 scorers. In two games, we’ve already seen the Wild give too much space to Nikolaj Ehlers. With his speed, you can’t afford to give him the time and space we have. And it would be nice if the Wild could find a way to contain Byfuglien to prevent him from delivering the big hits he has delivered.

I’d like to see Minnesota wake up from their stupor, but I don’t know if it’s possible. For the fans, I know we’re tired of seeing this team continually go down 0-2 in the series. We’ll be lucky if we get a win or two, but it’s highly doubtful that this team will come out of the quarterfinals as the victors. And let’s face it, we can’t blame anything on having to face the Chicago Blackhawks.