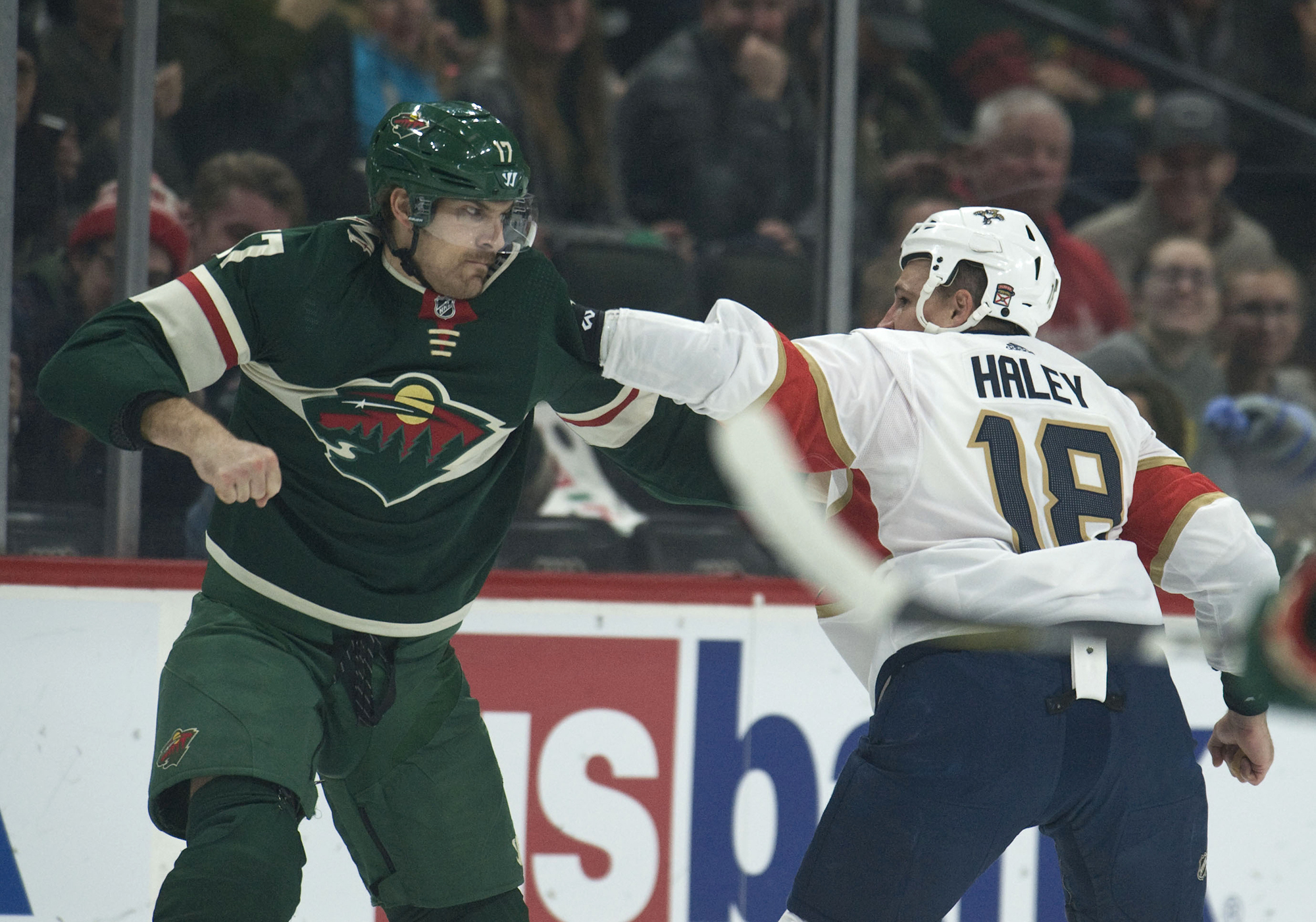 It was like watching Oprah during Tuesday night’s game against the Montreal Canadiens where almost any Wild player that wanted a goal got one as Minnesota rolled to a 7-1 rout.  You get a goal, and you get a goal…everyone gets a goal!  With trade rumors swirling about the team as it gets closer to the holiday trade freeze, the team had a little fun and it was good to see.

Another team hoping to have a little fun are the Florida Panthers.  They simply wonder when is it actually going to take place.  After narrowly missing the playoffs a season ago by just one point, Florida finds itself near the bottom of the Eastern Conference standings.  Can the Wild build off a great effort on Tuesday with another against the Panthers or will they have some fun at Minnesota’s expense?

1st Period Thoughts:  The Wild controlled the offensive zone for the first two minutes as the Zach Parise, Charlie Coyle and Nino Niederreiter line was really buzzing.  Jared Spurgeon set up a few nice chances but at the critical moment the Wild were unable to get the stick on the puck to direct the promising passes on goal.  The Panthers would strike first on their first quality scoring chances of the game as MacKenzie Weegar fired a shot from the point that Devan Dubnyk blocked with the leg pad but he’d give up a rebound that Denis Malgin pounced on for an easy goal.  1-0 Florida.  Minnesota would try to answer back and Niederreiter would set up Parise off the rush only to be robbed by a stretching save by James Reimer.  Florida’s penchant for turnovers helped provide the Wild with a plethora of prime scoring chances, but Minnesota couldn’t convert as Jason Zucker set up Eric Staal on the doorstep who shoveled a shot wide of an open net.  The Panthers started to take over the game a bit, by playing tight defensively and while they were not flying all over the Wild’s zone they were consistent at getting shots on goal and forcing Dubnyk to make saves.  Dubnyk seemed to give up rebounds rather easily and this led to a few dangerous moments.  Minnesota was not helping its cause with a lot of area passes that made for easy turnovers.  The Wild would get lucky towards the latter half of the period as Niederreiter was fed a pass out at the point and he’d wind up and blast a slap shot that rang off the right post and in.  1-1 game.  The Wild pressed hard for the go-ahead goal and a little flurry in the Florida crease had Parise hacking away at a puck that Reimer managed to cover up and keep the game tied at one going into the 1st intermission.

2nd Period Thoughts:  Minnesota had a great chance in the opening seconds of the period as Zucker set up Staal for a chance from in close that was stopped by Reimer.  The next few minutes was kind of an ugly morass of tight checking play through the neutral zone that meant zone entries were contested and there were not many shots being sent on goal by either club.  A high sticking call to Mikael Granlund gave the dangerous Panthers power play an opportunity to work for the go head goal.  The penalty kill did a good job at denying Florida from setting up Mike Hoffman for the one timer.  Dubnyk came up with some quality saves of his own and they got the big kill.  Perhaps energized by the kill, Nino won a battle along the wall as he sent a pass to Parise who dished it to Suter for a slap shot that was expertly deflected by Niederreiter that snuck through Reimer 5-hole.  2-1 Wild.  The goal would give the Wild a boost of energy and they’d add to their lead a few minutes later as Jared Spurgeon made a diving play to hold the zone as he pushed the puck to Granlund who made a beautiful cross-ice pass to Staal near the Florida crease for an easy tap in.  3-1 Wild.  Moments after the goal, Granlund made a perfect stretch pass to Zucker who raced in on a breakaway but he was stonewalled by Reimer.  The Wild flirted with a few more scoring chances in the last few minutes in the period, but they had lots to feel good about going into the 2nd intermission.

3rd Period Thoughts: There are times when Granlund performs moves, and you find yourself how that’s even possible. Shortly after the drop of the puck, he manages to keep the puck in the zone in a nifty pass between his legs to his own stick. The only downside, is not much came of it. Of course it allowed the Wild to keep possession of the puck both in their own zone and then into the neutral zone, allowing for a line change. That line change turned into a goal by Parise. With Minnesota being outshot the entire game, it’s nice to know that they’re finding a way to make the shots count. The Parise goal also added points to Niederreiter and Suter for the night. After a short foray into the Minnesota zone, the Wild then got it back to the other side of the ice with another beautiful scoring chance by Staal. He would get the puck between Reimer’s legs, but he would ultimately stop the puck from crossing the line. Needless to say, this is the kind of night that Reimer would like to forget. Coming off a blast from Jonas Brodin from the blue line and Coyle screening the goaltender, the Wild defenseman would get his fourth goal of the season. The thing about Brodin’s goal, is that it’s the kind of shot that as Wild fans, you don’t really get excited about. Well, unless it’s a Dumba shot from the blue line.  Minnesota would get a little careless with the puck as Matt Hendricks sent a lazy backhand pass through the middle of the ice that Dryden Hunt intercepted and he raced down the ice for a breakaway where he tried to go forehand to backhand but was shut down by Dubnyk.  In kind of a strange play after Reimer sprawled to cover up a puck, Joel Eriksson Ek tried to poke at a puck but his stick would catch Jordan Greenway right into the face and blood started to spatter all over the ice.  The Wild training staff alertly went out to meet Greenway and take him back to the locker room for repairs. A few minutes later, Reimer would slash at Luke Kunin who didn’t like the extra poke for the puck near his crease as the game started to get a little chippy.  After the scrum, it was Zucker and Keith Yandle going to the sin bin for coincidental roughing minors.  The game would calm down a bit as the home crowd gave their team another standing ovation in the closing minute.

D – Simon Johansson (Almtuna, Allsvenskan) ~ playing in Sweden’s 2nd tier league on loan to Almtuna, Johansson is having a fairly quiet season with just 2 goals, 8 points, 16 PIM’s and is a -16 through 27 games.

C – Connor Dewar (Everett, WHL) ~ the Pas, Manitoba-native had a goal and an assist with 8 shots on goal which was enough to earn him 2nd star honors, unfortunately it wasn’t enough for the Silvertips to earn a victory as they fell 4-3 to Spokane in a shootout.  Dewar has 24 goals, 45 points, 35 PIM’s and is a +11 in 30 games.

Let’s Play Hockey has released its latest rankings for the week, it was an eventful weekend with lots of upsets which has meant a fair amount of fluctuation in the rankings in Boys and Girls for Class A & Class AA as of December 12th, 2019.  Check it out!