Wild Fall 2-1 In Feisty Effort Against the Flames 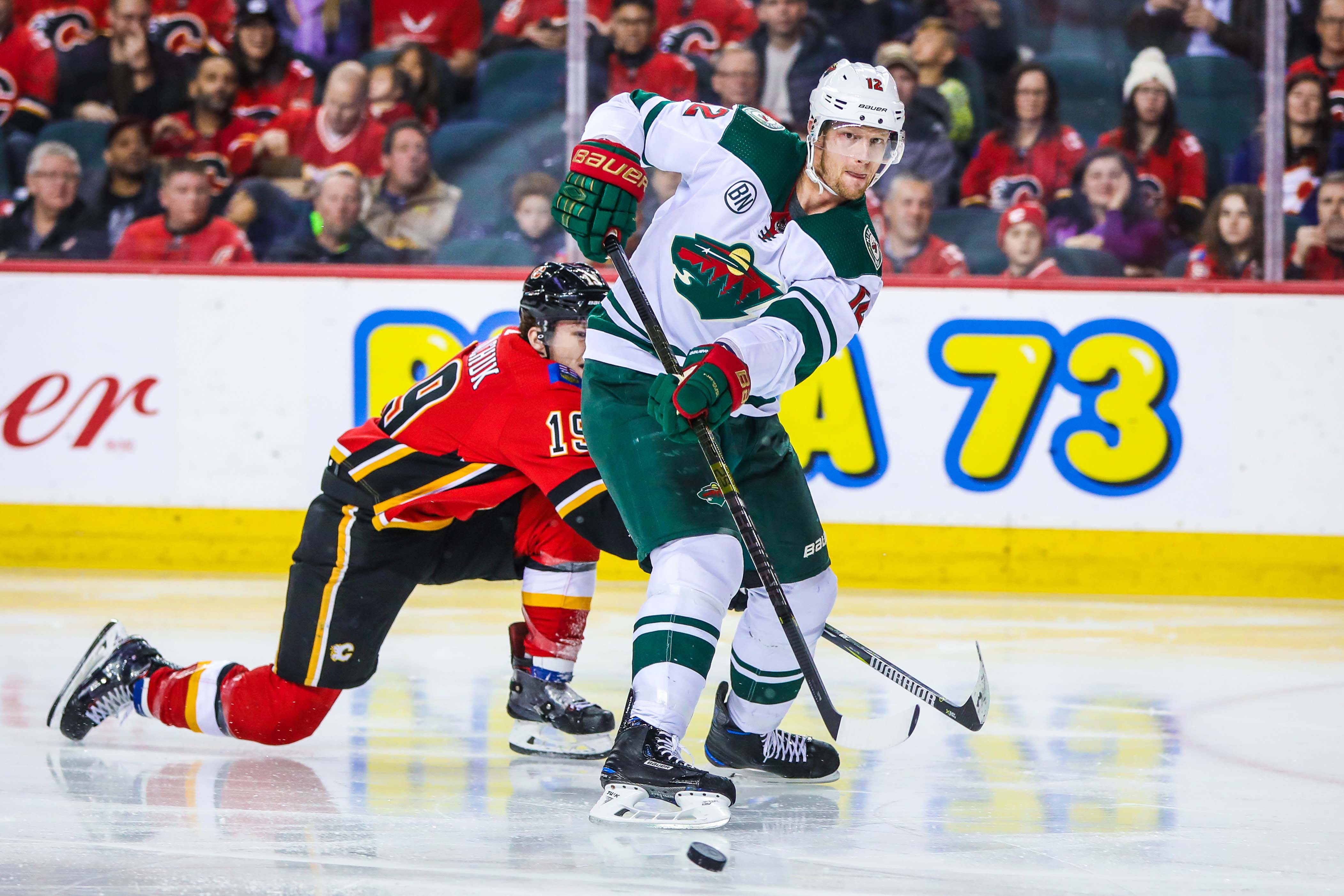 Wild Fall 2-1 In Feisty Effort Against the Flames

“Revenge is a dish, best served cold” is a great quote for this time of year.  Perhaps because it is winter right now or perhaps it has something to do with the fact I’m a Star Trek fan and remember it well as the ‘old Klingon proverb’ from Star Trek II: the Wrath of Khan.  Either way, revenge might be on the minds of the Minnesota Wild as they have a rare mid-afternoon tilt against the Calgary Flames.  Last week Friday, in a 2-0 loss to Calgary the game got more than a little chippy as a knee-to-knee hit and a late fight after a clean, open-ice hit prompted a Flames player to jump a Wild player in the closing minute of the game.  Two Flames players served short suspensions, but no doubt that will be fresh on their minds when the puck drops in St. Paul.

Even though Calgary won, with the suspensions comes a loss of income and there might be a few players looking for scores to settle.  The Minnesota Wild need to focus on what the final score of the game will be.  So will the Wild have their revenge or will they get burned again?

1st Period Thoughts:  The fireworks started right away as Matt Tkachuk and Matthew Dumba dropped the gloves and while there were not a ton of punches thrown, as it mostly was pushing and shoving with a random jab every now and then.  I’d call the ‘fight’ a draw as neither player really dominated the scrap and both players would go to the box with 5-minutes each for fighting.  The feisty play didn’t stop there as both clubs were shoving and chirping after the whistle.  The Charlie Coyle, Nino Niederreiter, Zach Parise line did a good job of causing some havoc down low in the Calgary zone that drew appreciative cheers from the sellout crowd.  Minnesota was utilizing its point men well as Jonas Brodin, Jared Spurgeon and Greg Pateryn had the opportunity to fire a few bombs that tested David Rittich in the first few minutes.  The Wild were moving their feet well and the 3rd line went on the attack as Marcus Foligno found Luke Kunin for a small opportunity off the rush but his rising shot would miss high.  A few minutes later another good outlet pass gave the Wild a 2-on-1 as Parise made a nice saucer pass to Coyle who was hooked a bit as he got a shot on goal that Rittch denied with a sprawling effort.  Minnesota was crashing the net with some determination as a point shot by Pateryn was knocked down by Rittich and J.T. Brown tried to jam home the rebound but the Flames goalie was able to cover it up for a whistle.  A holding penalty by Travis Hamonic would give the Wild its first power play of the game, but it didn’t go as expected.  The Wild would get caught pinching and Mark Giordano got behind the Wild defense for a breakaway and he’d put a shot up off the left post and behind the crossbar to give the Flames a 1-0 lead on his shorthanded tally.  A few minutes later, Noah Hanifin tripped up Eric Staal giving Minnesota another opportunity with the man advantage.  Minnesota controlled the offensive zone well enough, but not a lot of shots were being sent towards the Calgary goal and they’d come up empty again.  The Flames would go back on the attack and a shot by Hamonic would deflect off the skate of Johnny Gaudreau that Devan Dubnyk alertly stopped.  The feisty play continued as Giordano and Hendricks dropped the gloves in a quick little scrap in the corner.  Moments after that, as a scrum seemed to be directed towards Dumba, Ryan Suter would step in and drop the gloves with Sam Bennett where the alternate captain tagged Bennett with a good right handed punch before the fight finally broke up.  Joel Eriksson Ek would raced down the ice in a 2-on-1, but his backhand bid was absorbed by Rittich.  Luke Kunin would bump into Rittich who dove soccer-player style that drew a goaltender interference penalty that drew some boo’s and give the Flames a power play going into the 2nd period as they held a 1-0 advantage.

2nd Period Thoughts:  The Flames had a power play to start the period and they’d have terrific chance off the rush as Sean Monahan was stopped by Dubnyk who stacked the pads.  The Wild made their challenge that much tougher as Parise was given a slashing call near the Flames’ bench giving Calgary a 5-on-3 advantage.  Minnesota would get the kill with some clutch clears of the zone by Eric Fehr and Luke Kunin.  The Wild would then tie the game as Jordan Greenway surprised Rittich with a shot taken from the right wall.  1-1 game.  Minnesota would continue to create chances off the rush as Fehr set up Matt Hendricks for a partial breakaway but his forehand bid was steered aside by Rittich.  Both clubs were playing tighter defensively and shots on goal were few and far between throughout the middle portion of the period.  Pateryn would get sent to the sin bin for tripping up Tkachuk and the Flames would go back on the power play.  The Flames’ power play didn’t last long as Andrew Mangiapane hauled down Suter to make the ice 4-on-4 for about a minute.  Minnesota would kill time on the 4-on-4 and then had an abbreviated power play of their own.  Without Dumba on the power play the Wild didn’t seem to have much of a plan as how to attack.  The power play would come up empty and Minnesota’s best scoring chance of the period came on a 2-on-1 between Niederreiter and Greenway.  Unfortunately, Greenway didn’t drive the net to force the Calgary defender to drop back with him and Niederreiter had to take the shot without help and Rittich was able to make a nice save.  The Flames had a huge missed opportunity of their own late as a turnover in the offensive zone by Mark Jankowski was dished over to James Neal who had a ton of net to work with and he rang a shot off the post and the game would remain tied at 1-1 going into the 2nd intermission.

3rd Period Thoughts:  The Wild would give up a few opportunities for the Flames off the rush as Elias Lindholm tracked down an area pass for a breakaway but he’d lift his shot high over the net.  The Flames nearly cashed in on the next shift as Gaudreau’s wrap around bid was stopped by Dubnyk.  The Wild seemed to be chasing a lot and Neal would draw the Minnesota defense toward him and he’d drop a pass back to Tkachuk who threaded a shot by Dubnyk.  2-1 Flames.  Minnesota struggled mightily to create scoring chances as they tried to set up trailers for shots but all too often the passes would be intercepted and they’d come up empty.  The Wild’s 3rd line would spark a bit of a late-period rally as Kunin, Greenway and Eriksson Ek started to really apply pressure on the forecheck.  It wasn’t resulting in a ton of shots, but the effort started to spill over to the other lines and suddenly Coyle is flying off the rush and he came dangerously close to tying the game.  Calgary would earn a delay of game penalty for some shenanigans as they tried to buy some extra time by sending out wrong players intentionally and players needing to attend to equipment issues.  Minnesota would pull Dubnyk with about 2 minutes left to play to make it a 6-on-4 power play.  The Flames would tighten up to deny the middle of the ice and the Wild would have to try to set up a chance off a point shot.  Minnesota would call a timeout with 1:20 left with 44 seconds on the power play left.  The Wild were able to set up Suter for two big blasts from the point that caused a little chaos.  Staal would fire a sharp angle shot that hit Rittich in the side of the helmet but the puck would roll off his shoulder and out of harm’s way.  That was as close as the Wild would get as Granlund fanned on a chance from the slot and Minnesota would come up short 2-1.

The Wild would get out to a slow start on Friday against the San Antonio Rampage, the team that is the St. Louis’ Blues affiliate.  The Rampage dominated the 1st period, peppering goaltender C.J. Motte with 18 shots.  The Rampage would jump out to a 2-0 lead on goals about 30 seconds apart by Nikita Soshnikov and Trevor Smith.  Motte would hold it together, and would give the Wild a chance to win.  In the 2nd period, the Wild would get their legs going and they’d score late in the period as Gerald Mayhew found the back of the net behind Ville Husso, 2-1 going into the 2nd intermission.  Iowa struck early in the 3rd period as Colton Beck tied the game a little over 3 minutes in and then the Wild would appear to seal the game late as Matt Read set up Justin Kloos for a one-timer that he rifled by Husso.  3-2 Wild.  Unfortunately the Rampage would answer right back 30 seconds later as Soshnikov scored his 2nd goal of the game and they’d go to overtime.  In overtime, the Wild found themselves a man down due to a bench minor in the closing minute.  Iowa would get the big kill in overtime, and back at even strength neither team was able to generate much offensive pressure and the game would go to a shootout.  The Rampage would strike twice on the shootout, while Dmitry Sokolov had the lone tally for the Wild and they’d fall 4-3.  Motte had 31 saves in the loss.

G – Dereck Baribeau (Quebec, QMJHL) ~ the big goaltender didn’t have much work on Friday, making just 10 saves in a 2-1 win over Shawinigan on Friday.  Baribeau has a 9-7 record, 2.40 goals against average and an .906% save percentage.