Wild's offense wakes up in 4-1 against Rangers 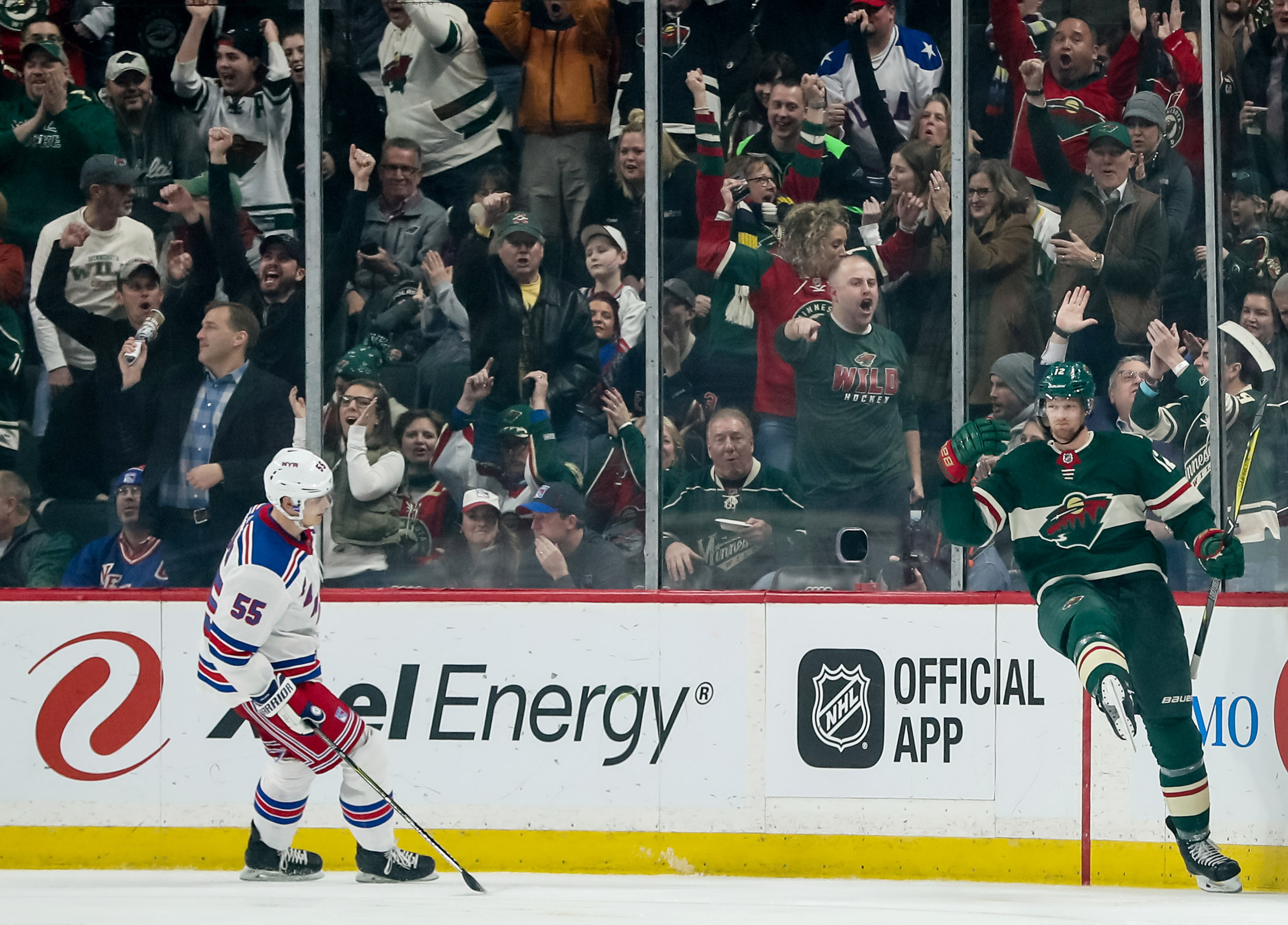 Wild's offense wakes up in 4-1 against Rangers

“Blow it up”, “fire the coach”, “trade ’em all away” are probably all phrases you’ve heard the last few weeks if you know any other Minnesota Wild fans in your life.  In fact, they’re probably a little irritable right now, especially if you ask them how the game went.  The incredible thing is, the Minnesota Wild players don’t seem that irritable, in fact some sound like they’re in denial or rather ambivalent.  Comments made by many say the Wild look like a team that is resigned to its fate.

Minnesota traded Charlie Coyle back home to Boston for another Boston-area kid in 22-year old forward Ryan Donato and a 5th round pick.  That should have put a little bit of a shock through the Wild locker room.  The Rangers were that team a season ago, and they’ve restocked their prospect pool and given their young players carry the mail and have been more competitive than probably many thought they’d be.  Unfortunately they’re in a super tough Metropolitan Division and they’re looking like a non-playoff team.  Will the trade finally serve as a wake up call, or will this Wild club’s death spiral will continue?

1st Period Thoughts: Welcome to the Wild Donato, as you were on the ice for the opening face off. I guess if you’re going to see how a guy reacts to being on a new NHL team when you were playing in the AHL when you got traded, that’s a sure fire way to see if he’s awake. It probably also sends a message to the rest of the roster. I only hope that the young players keep getting chances instead of getting the short end of the stick when it comes to shifts. What is however making me nervous early in this game, is that the Rangers seem a little more mobile and wily when it comes to moving the puck in the offensive zone. New York seems to be better at moving the puck when you don’t think they’ll be able to, and that is scary. Especially when Devan Dubnyk isn’t following the puck like he used to. I wouldn’t be surprised if he coughs up a goal or two simply because he’s way out of position. The ability to move the puck is making it more difficult for the Wild to clear the zone. Near the midway point of the period, so far that hasn’t caused too many problems for Minnesota. Also, there have only been a total of six shots on goal. When I see those kinds of low shot numbers, is when I begin to worry. This is the kind of game where it’s going to be a fluky goal for either team that becomes the proverbial nail in the coffin. As I mentioned in today’s preview, Henrik Lundqvist isn’t exactly having a spectacular season either. Yet at the same time, with younger players on both sides of the ice trying to make a name for themselves, it could be a faster paced game. At least I hope that’s the case. As we get closer to the end of the period, Donato was put on a line with Eric Staal and Luke Kunin. I have to say I liked that grouping. Staal would later draw the first penalty, sending Adam McQuaid to the box for tripping. It becomes imperative for the Wild to use this to their advantage. However, the beginning of the power play looks a lot like the power play we’ve become used to. The Rangers didn’t have to work too hard to keep the Wild the perimeter. With just six seconds remaining in the power play, Jared Spurgeon would end the Wild’s scoring drought after Staal shot it through the crease. And if you thought the Wild’s scoring would end there, just a minute later, Joel Eriksson Ek deflected a blast from Brad Hunt. The Rangers would however contest the goal for an offsides. The Rangers would win the challenge, and it would go back to a 1-0 lead for Minnesota. Now Minnesota has to find a way to not let that get into their heads. One thing that is very different is the Wild’s skating. This is the first time we’ve seen a more upbeat skating. It is up the the Wild now if they can maintain that pace for another forty minutes.

2nd Period Thoughts: With the low shooting and low scoring of this game, this means that Dubnyk gets bored. And when Dubnyk gets bored, he leaves his crease to play the puck when he really shouldn’t. Early in this period he skated about half way to the blue line to clear the puck. Seriously, I want to bungee cord Dubnyk to the crease. As I mentioned earlier (and in today’s preview as well), with New York going with younger players, they tend to be more mobile. I hope that either Bruce Boudreau or goalie coach Bob Mason takes Dubnyk aside and tells him enough with the theatrics and to remain in your crease. We’re about five minutes into the period and there’s only been one shot on goal, that by the Rangers. Jordan Greenway would be sent to the penalty box for tripping while in the offensive zone. The Rangers wouldn’t waste any time with their power play, with Pavel Buchnevich scoring an goal right between Dubnyk’s legs. These are the kinds of goals that Dubnyk keeps giving up for whatever ridiculous reason. Clearly goaltending is one of the areas that General Manager Paul Fenton needs to address next. Neither Dubnyk nor Alex Stalock is the answer for this team and who knows if Kaapo Kahkonen is the answer either. The Wild would get their second goal finally. Greg Pateryn would take a shot from the blue line. Lundqvist would get the original save, but Mikael Granlund would get the goal pretty much face to face with Lundqvist while he was being taken down by a Rangers skater from behind. While I think it’s still too early to determine if the Wild are getting the message from management with the trades of Coyle and Nino Niederreiter, so far tonight has been a step in the right direction. Although, it’s probably more of a baby step. I’ll take it however. Not only is the Wild’s skating better, but there seems to be much better on-ice communication. There seems to be less of the passing to random areas. The passes that are being made feel to be far more intentional. Again, baby steps. It was also a welcome change of pace to head into the locker room with the lead.

3rd Period Thoughts: Oh Ryan Suter. Why do you not shoot when you have  a great opening. No, instead you just waste time and look to make a pass. Now, Suter doesn’t have the greatest shot, but it frustrates me when he doesn’t even make the attempt. That’s been the thing about tonight. We have these younger players playing shoot-first hockey, and then you have guys like Suter who look to pass. That is why we’re in the mess that we’re currently in. And that’s what we miss having Matt Dumba on injured reserve. He’s a defenseman who will shoot. While most of this game has been a vast improvement over recent games, as we head into the midpoint of the last period, we’re seeing some of the more boneheaded things from this team that have been driving us crazy for some time now. Things were starting to feel a bit too loose, too sloppy defensively. These were the kinds of things that you can’t afford when you keep letting your foot off the gas. A bit of controversy would come when Staal’s stick would trip Brady Skjei that would then allow for an unassisted goal by Zach Parise. The Rangers are going to get their time to try and even things up or at least close the gap, with Donato getting tagged for the double minor for high sticking. And considering that the Wild’s penalty kill has been less than spectacular later, the last thing this team can afford is a double minor. Things were again kind of messy with the sticks, so the double minor wasn’t completely unexpected. The Wild would kill the first two minutes by keeping their sticks in passing lanes. The Rangers would take their time out and return to the ice with an empty net. The Wild would kill the second penalty of the double minor. The would also prevent the Rangers from getting a whistle to get Lundqvist back into the net. Donato and Greenway would get a couple of shots on the empty net, with Greenway finally tallying the empty net goal. Even with just two minutes remaining, the Wild would keep pressuring, including a beautiful move by Hunt. This was definitely a team effort by this team tonight. This has been missing. Now whether this continues is another thing. And of course now we get to hear about how this team is back in a playoff spot.

The Wild’s farm team has been going through its own struggles although not nearly as severe as the big club as they have lost 3 straight games in overtime.  Iowa has had their struggled mightily in games in Texas, but they’ve been much better against those teams on home ice.  The Wild and Stars would not give much in the way of time and space.  Texas would score late in the period as Justin Dowling found the net behind Kaapo Kahkonen.  Iowa would answer back in the 2nd period on the power play as Kyle Rau buried a Matt Read pass tying it up at 1-1.  The game was back and forth but both Landon Bow and Kahkonen were outstanding as they came up with big save after baig save.  In overtime, it was former Wild prospect camp tryout Brad McLure scored his first AHL goal to give Texas the win.  Kahkonen had 35 saves in the victory.