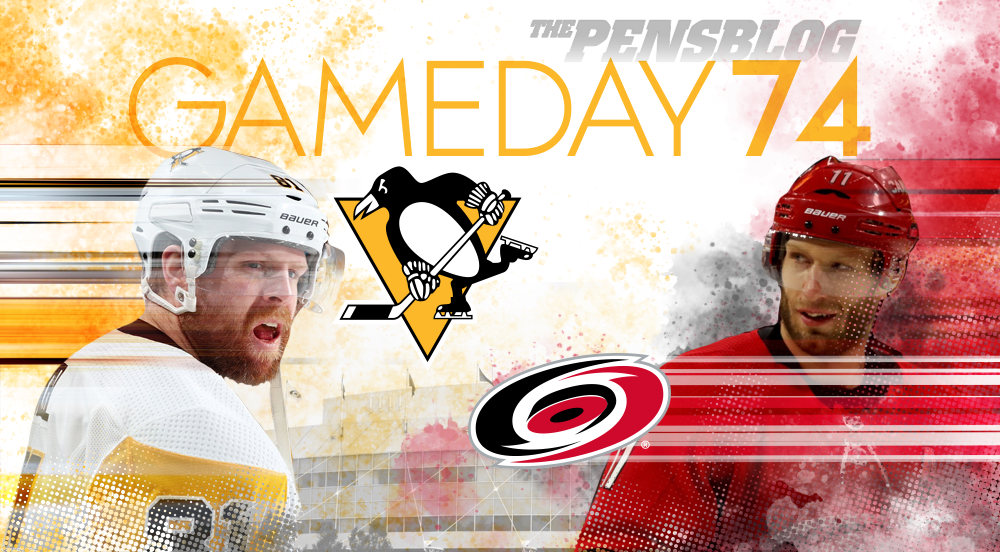 Tonight, the Penguins kick off their 4 game road swing in North Carolina as the two teams separated by just 3 points face off in their penultimate matchup on the year.

In the first two meetings this year, we saw the home team shutout in both by way of a 3-0 Pens win in Raleigh in December and a 4-0 Canes win at PPG on February.

The amount at stake tonight can only be measured in metric fucktons following the Pens Stadium Series Part 2 collapse on Sunday night.

Though the Pens will remain 3rd in the Metro regardless of how the game plays out, things could really look differently in the Metro by the time you wake up tomorrow.  The Isles play host to the Bruins, Washington travels to Jersey, and Columbus is in Calgary tonight, while the Flyers, fresh off their season getting a lifeline on Sunday, welcome the Habs.

The Penguins come into this game still 6-2-2 in their last 10, but are 0-1-1 in their last two since their 3 game win streak was ended Saturday.  The cloud hanging above their heads probably isn’t as dark as it is had they not pissed away a late lead (again) to the Flyers, but this sport is a fickle beast.

Also fickle: The Pens powerplay.  After going 3-for-4 last Thursday night in Buffalo, they’ve managed to score exactly 0 goals in their last 8 opportunities.

However, much like the 4-0 loss in Raleigh last month, the Penguins will have to do it tonight without the services of Evgeni Malkin again, out week-to-week with an upper body injury, presumably sustained on this cheap play from Bortuzzo on Saturday afternoon.

Watch out for Sidney Crosby tonight, though.  After playing perhaps the worst game of his career on Sunday, getting embarrassed on both Flyers goals, you could put your house, savings, 401(k), life, parents’ lives, and both the Sun and moon on him putting in an absolute unit of a shift in tonight.

Here’s what HCMS rolled out on Sunday night, with Bryan Rust returning from his 9 game absence to replace 71 in the lineup.  Would be cool to see Letang, a full participant in the morning skate, back tonight too.  He took his spot alongside Dumo and took powerplay reps.  All signs point to his return.

At the other side of the ice, the Carolina Hurricanes are a good, young team.  The addition of Nino Niederreiter at the deadline only made them better, scoring 11G-11A-22P in 25 games since making the move from Minnesota.

They’re extremely fast, have the #2 overall pick from this past summer riding shotgun with Jordan Staal, and are being led by one of the best young centers in the game in Sebastian Aho, whose 30 goals, 48 assists, and 78 points lead the Canes in all 3 categories as well.

But there’s not a single team that generates a higher rate of expected goals per hour of score/venue adjusted 5v5 ice time than the Hurricanes, either.

Petr Mrazek, over that span, has gone 8-3-0 with a .934 SV% and 3 shutouts, the 7th best overall SV% over that stretch.  McElhinney hasn’t been as good, but is a respectable 7-2-1 with a .918 SV% and 2 shutouts.  Mrazek’s 5.96 goals saved above average is 7th best over that period and, among goalies that have played more than one game since February 1st, Mrazek has the best high danger save percentage of 0.968 (all 5v5 stats via Natural Stat Trick).

At the beginning of the year, they were league average goaltending away from being dangerous.

Via Jason Paul‘s Wave Intel Versus tool, we can see how these two teams match up overall (top) and their last 10 games (bottom).

Carolina is a scary enough team, but they’re nightmare fuel in terms of offensive generation and when trailing.

The Pens powerplay has their work cut out for them against the 6th best PK in the game (82.2%).

We should be in for a real peach of a game tonight, folks.