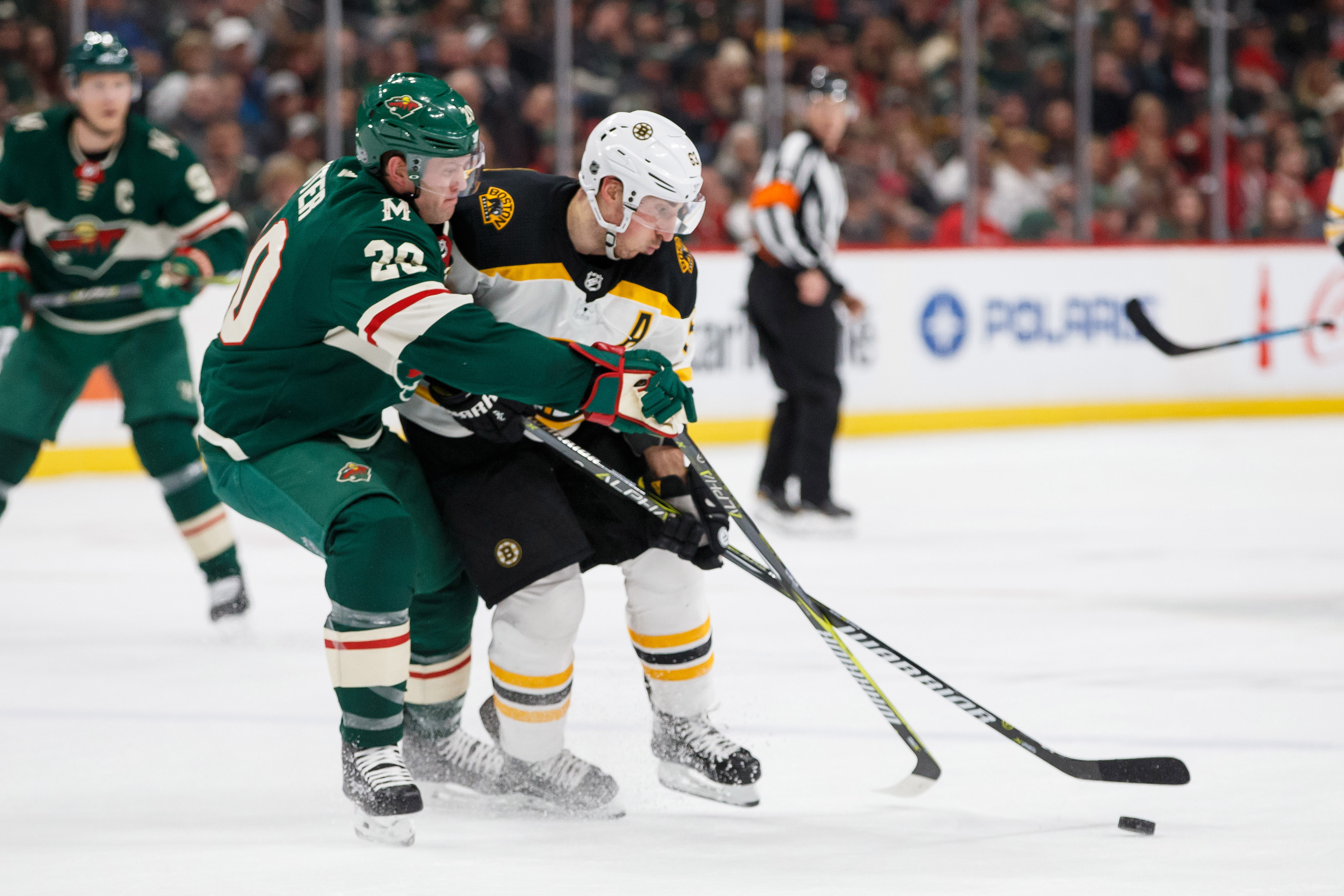 It was a bittersweet feeling on Tuesday night, as the Minnesota Wild completed a 5-game season series sweep of the Winnipeg Jets in a 5-1 victory on home ice.  Unfortunately, Minnesota didn’t have destiny entirely in its own hands.  On that night, destiny lied in the hands of the Edmonton who was playing Colorado last night and if the Oilers could somehow keep the Avalanche from netting a point our playoff hopes would still be alive.  Not a great choice to rely on the Oilers to win anything other than the draft lottery these days and they got crushed by Colorado 6-2 and with that the playoff hopes vanished.  The Wild’s playoff streak stops at 6 seasons.

The Boston Bruins come to town, winner of their last game which was a 6-2 blitzing of Columbus and hoping to sharpen their game before what they hope is a long postseason run.  So with nothing to play for how will this Wild team respond?  Will it play loose and yet determined like it did on Tuesday or will they look disconnected as they don’t want to get too beat up too much before they leave for the off-season?

1st Period Thoughts:  The Bruins had the first quality chance as Jake DeBrusk set up David Pastrnak for a quick shot that was steered aside by Alex Stalock.  Minnesota was moving its feet well, including newcomer Nico Sturm who fluttered a shot towards the goal that bounced at Jaroslav Halak.  Moments after that Ryan Donato would set up Luke Kunin for a quick shot from the slot that Halak blocked away.  The Wild kept attacking and Jason Zucker got a little space and time and he’d rip a shot off the post.  The Bruins would answer back with a great chance of their own as Charlie Coyle dished a puck to Zach Senshyn who moved in his backhander was directed to the corner by Stalock.  The game would slow down a bit as Minnesota and Boston exchanged turnovers in the neutral zone to no real effect.  Donato would create a few good opportunities with some good pressure on the puck and he’d skate in and let go a few well placed shots that gave Halak some trouble, but he was able to direct the puck out of danger.  Coyle was looking determined as he skated into the zone and his high rising shot caromed off the glass behind and above the Wild goal.  Minnesota’s team speed was causing the Bruins some to have some trouble in their own end as another Donato shot causes havoc as Halak makes a save and then has to try to fight off a flurry near his crease.  The Bruins would try to get their forecheck going with its 4th line as David Backes came close to cashing in on a chance from in close.  Good energy for both clubs in a game that doesn’t really matter all that much.  I like Sturm’s speed and assertiveness in puck battles.  Still 0-0 after 1 period of play.

2nd Period Thoughts:  The Wild were a bit sloppy to start the 2nd and the Bruins carried most of the play through the first few minutes.  The physical play was also ramping up as Jordan Greenway delivered a good hit to Kevan Miller who careened into the boards awkwardly and seemed to be a little worse for the wear.  The Bruins would catch the Wild in a bad line change and this led to a wide open chance for Noel Acciari that was denied by Stalock.  Minnesota just seemed out of sync in their own end as they chased the puck but the Bruins held the zone and Matt Grzelcyk‘s shot from the point missed wide, caromed off the boards and back out front that was deflected across out into the slot where Joakim Nordstrom went top shelf before Stalock could get across.  1-0 Boston.  The game seemed to devolve into a lot of freelancing plays and not much in the way of defensive structure.  The physical play started to morph into some chippy play as Kunin would get into a shoving match with Connor Clifton and earn a penalty for his effort.  The Bruins’ power play tried to keep it simple, setting up a one-timer from the point that would deflect up and into the netting above the glass.  Marcus Johansson managed to get a cross-ice pass to Pastrnak that was stopped by Stalock and as Pastrnak tried to gather the puck it was knocked away by Jared Spurgeon.  J.T. Brown picked up Spurgeon’s poke check pass and took off towards the Boston zone where he rifled a shot on goal that was blocked aside by Halak.  Minnesota would get the kill but they treated fans to another classic Wild moment as a blocked shot turned into a 2-on-1 with Eric Staal having at least a step or two on Torey Krug.  But instead of taking a shot he’d try to pass the puck that never came close to connecting as boo’s rained down from the sellout crowd all too used to seeing the team thwart its own opportunities.  A few more boo’s were heard as the period ended with the team down 1-0 going into the 3rd.

3rd Period Thoughts:  Minnesota seemed to lack urgency to start the 3rd as the Bruins nearly caught the Wild playing a bit sleepy defensively as Karson Kuhlman skated in and rang a shot off the post.  The Wild’s 4th line nearly cashed in as a Ryan Suter shot was stopped by Halak but Eric Fehr couldn’t jam home the rebound.  Minnesota would draw a holding penalty to get their first power play of the game.  The Wild did nothing with the man advantage as Boston’s puck pressure never allowed Minnesota to get anything going offensively.  Boston didn’t attack much in the 3rd as the Wild started to take any chance to shoot the biscuit.  Brad Hunt would get called for interference.  The Bruins’ power play was extra conservative as they tried to kill time rather than trying to add to their lead.  Minnesota would get the kill but would they have the push to get the equalizer and make a game of it?  Nope.  The Bruins would kill that dream just under 3 minutes left as DeBrusk drives towards the net and slips a pass back to Pastrnak for an easy goal.  2-0 Bruins.  In fact, the Wild were feeling generous and as they pulled Stalock for an extra attacker we’d give one of our patented ‘first’ moments for an opposing player as Zach Senshyn scored on the empty net to make it 3-0 to seal the Boston victory while the Minnesota bench all had the 1,000-yard stare.  Minnesota’s home season ends with a wimper and the most shutouts since the 2002-03 season.

C – Andrei Svetlakov (CSKA Moscow, KHL) ~ the 4th liner had an assist and went 12-for-20 on his draws in CSKA Moscow’s 2-1 overtime loss to SKA St. Petersburg on Monday.  He then had another helper on Wednesday in CSKA’s 3-1 loss to SKA and went 5-for-11 on his draws.  CSKA Moscow is tied 2-2 in the series with SKA St. Petersburg as part of the KHL Semifinals.  Svetlakov has a goal and 5 points, 4 PIM’s and is a +4 in 10 playoff games.

C – Alexander Khovanov (Moncton, QMJHL) ~ the newly signed Russian didn’t have any points but he did have 3 shots on goal and went 7-for-12 on his draws in the Wildcats’ 3-2 series clinching win over Baie-Comeau.  Khovanov has 3 goals, 7 points, 14 PIM’s and is a -3 in 7 playoff games.