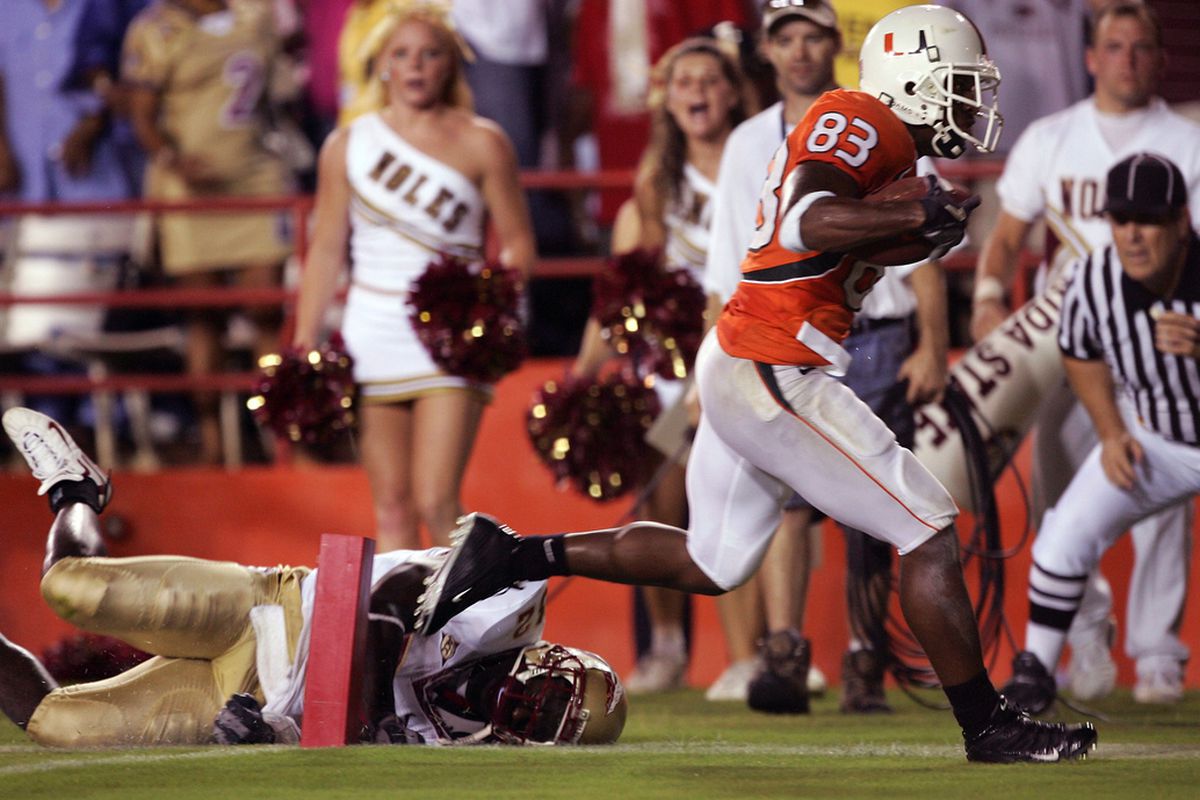 Hurricane Frances may have delayed Miami’s debut as a member of the ACC, but it couldn’t wash away the Hurricanes’ winning streak over rival Florida State. On this day 15 years ago, the Hurricanes rallied from a 10-point fourth quarter deficit to down the Seminoles in overtime, 16-10.

The contest wasn’t pretty, but it was pretty good as FSU and Miami kicked off the season on Sept. 10, 2004. The teams were scheduled to play four days earlier on Labor Day, but the aforementioned hurricane forced the schools to postpone the contest.

Both teams were ranked in the top 5, but it wasn’t until the final half-minute of regulation that either team scored an offensive touchdown. Until the final quarter, the lone touchdown had came on a 61-yard fumble return by FSU’s Antonio Cromartie.

The Hurricanes had defeated FSU five straight times coming in, including twice the year before as the teams met in what would serve as the season opener for both schools. After winning four straight Big East titles, Miami was playing its first game as a member of the ACC.

Trailing 10-0, the Hurricanes marched to the FSU 2-yard-line early in the fourth quarter, but the Seminoles were able to hold and force Miami kicker Jon Peattie to knock through an 18-yard field. With less than four minutes to go, FSU’s Xavier Beitia had a chance to put the game away on a 34-yard field goal try.

Beitia had connected from 45 yards out to open the scoring, but field goals to put away Miami and Florida State did not have the best history. Beitia’s kick was blocked and Miami retained life.

Quarterback Brock Berlin marched the Hurricanes 80 yards in five plays and 52 seconds to tie the game. With 30 seconds to go, the Hurricanes drew even on a slip screen to Sinorice Moss, who outran FSU defenders to the end zone.

The Seminoles would get the ball first in overtime, but quarterback Chris Rix would commit his fourth turnover of the game on third down with a fumble. It took just two plays for Miami running back Frank Gore to find the end zone from 18 yards out.

The victory served as the sixth straight for Miami over FSU. The Hurricanes would hold the Seminoles to just 165 yards in the victory. Cromartie had an interception to go with his fumble return for a score for FSU. Berlin passed for 255 yards for Miami while Gore rushed for 89 yards on 18 carries.

When Miami joined the ACC, many from the fan base had referred to the new-look ACC as the “All Canes Conference”. In 15 years as a member, Miami has yet to win the ACC. Its first victory as a member however, was a sweet one over its rivals and it happened on this day 15 years ago.