Clemstunning? The Last Five Reigning National Champs to Fall From No. 1 Without Losing 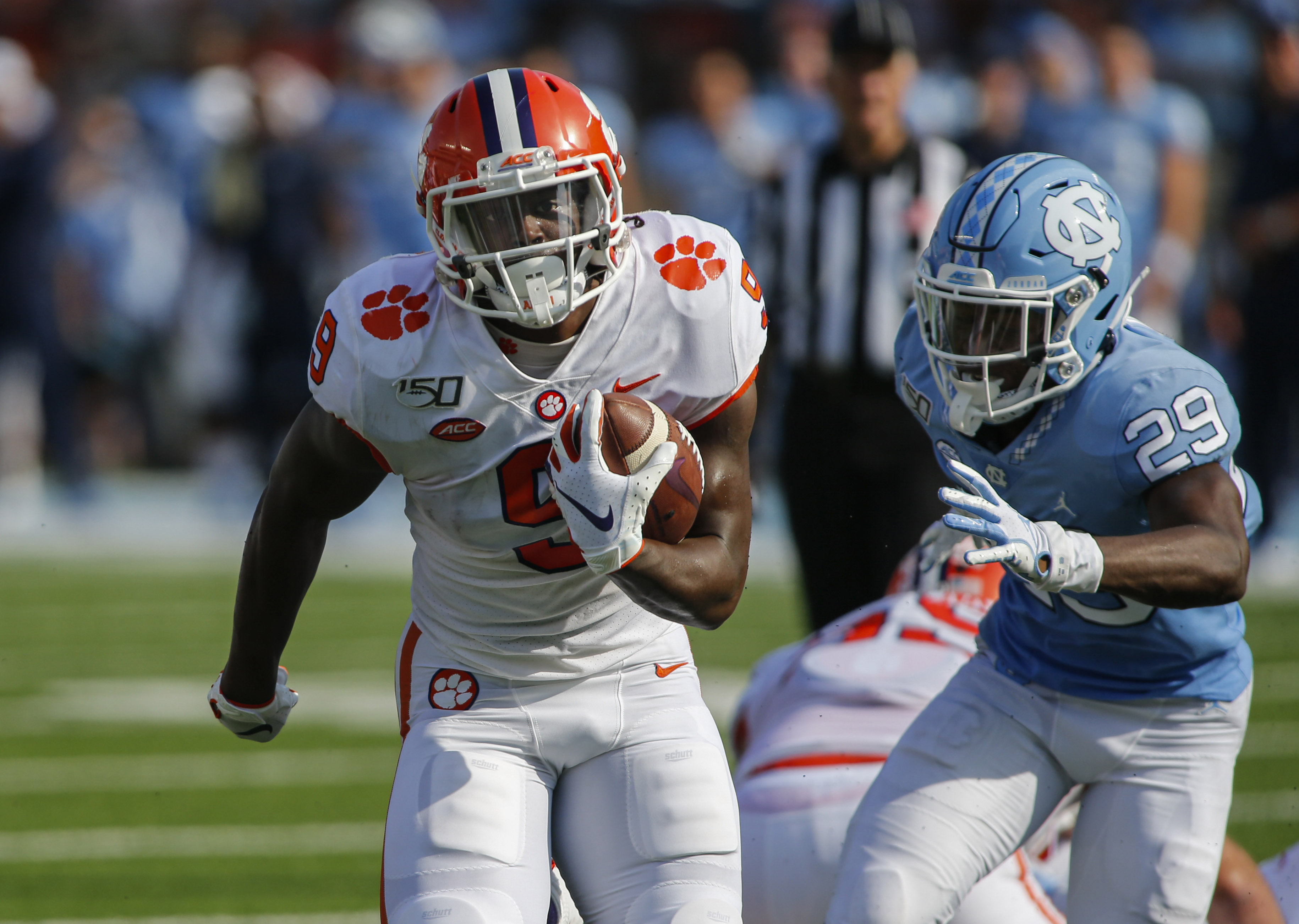 Clemstunning? The Last Five Reigning National Champs to Fall From No. 1 Without Losing

The Clemson Tigers have made the College Football Playoff in each of the last four seasons and have won 20 straight games dating back to the start of last season. When the latest AP Poll was released on Sunday however, the Tigers fell from the top spot to No. 2.

Clemson currently sits a spot behind top-ranked Alabama, who it defeated for last season’s national championship and has faced in each of the last four College Football Playoffs. The Tigers were forced to hold off North Carolina, 21-20, in Chapel Hill on Saturday, thanks to a missed 2-point conversion with just over a minute to play.

That left one to wonder about prior reigning national champions to fall from the top spot in the AP Poll without losing. Here’s a look at the last five:

Fall: Fell to No. 2 on Nov. 8
Replaced By: Clemson
Previous Game Result: Defeated Illinois in Champagne, 28-3
Key Players: Ezekiel Elliott, RB; Taylor Decker, T; Joey Bosa, DE
Finish: 12-1, No. 4 in AP Poll, defeated Notre Dame in Fiesta Bowl, 44-28
Overview: Ohio State had won 23 games when it was replaced by Clemson late in the 2015 season. The Buckeyes had dominated a 5-4 Illinois team on the road, but Clemson’s 23-13 home victory over Florida State was enough to catapult the Tigers from No. 3 past undefeated Baylor and Ohio State. In its first game as No. 2, the Buckeyes were stunned by No. 9 Michigan State on a last-second field goal in Columbus, 17-14. Michigan State would go on to run the table, win the Big Ten and earn a playoff spot, only to lose to eventual national champion Alabama in the Cotton Bowl, 38-0. The Buckeyes would settle for the Fiesta Bowl and a top-5 finish. The Clemson team that jumped Ohio State would fall to the Crimson Tide in a high-scoring national title game.

Fall: Fell to No. 2 on Oct. 12
Replaced By: Mississippi State
Previous Game Result: Won at Syracuse, 38-20
Key Players: Jameis Winston, QB; Rashad Greene, WR; Jalen Ramsey, DB
Finish: 13-1, ACC champions, No. 5 in AP Poll, lost to Oregon 59-20 in Rose Bowl
Overview: After one of the more dominant national championship seasons in 2013, Florida State had a knack for living on the edge in 2014. The Seminoles fell from the No. 1 spot in the polls after a lackluster, but easy 38-20 win over Syracuse. FSU was replaced by Mississippi State, who reached the top spot for the first time ever. The Bulldogs went from unranked to No. 1 in less than a month after three straight victories over top-10 teams in LSU, Texas A&M and Auburn. FSU would run the regular season table, win the ACC and run its winning streak to 29 games before being blasted by Oregon in the Rose Bowl and first-ever national semifinal, 59-20. Oregon would fall to Ohio State for the national championship. Mississippi State lost three of its final four games, including a 49-34 Orange Bowl defeat to a Georgia Tech team that fell to FSU in the ACC Championship.

Fall: Fell to No. 2 on Oct. 18
Replaced By: Alabama
Previous Game Result: Defeated Arkansas at home, 23-20
Key Players: Tim Tebow, QB; Brandon Spikes, LB; Joe Haden, CB
Finish: 13-1, No. 3 in AP Poll, defeated Cincinnati 51-24 in Sugar Bowl
Overview: Florida had won 15 straight games when it kicked a field goal as time expired to top Arkansas at home. The Gators were replaced by Alabama, who was coming off a 20-6 win over No. 22 South Carolina. Florida’s fall from the top spot, however, would last just a week. The Gators regained the top spot following a 29-19 victory over Mississippi State and former offensive coordinator Dan Mullen. That same week, Alabama needed a blocked field goal as time expired to slip past Tennessee, 12-10. Florida and Alabama would meet in a match-up of No. 1 vs. No. 2 for the SEC Championship. Alabama won the game 32-13 en route to its first national championship under Nick Saban.

Fall: Fell to No. 2 on Nov. 3
Replaced By: Oklahoma
Previous Game Result: Defeated Rutgers in Piscataway, 42-17
Key Players: Willis McGahee, RB; Brett Romberg, C; Jonathan Vilma, LB
Finish: 12-1, Big East champions, No. 2 in AP Poll, lost to Ohio State in Fiesta Bowl in overtime, 31-24
Overview: Miami had just won its 30th straight game when it fell from the No. 1 spot in the AP Poll. The Hurricanes actually trailed 1-8 Rutgers after three quarters, 17-14, before scoring the game’s final 28 points. Oklahoma claimed the top spot briefly after a 27-11 win over No. 13 Colorado. The following week, the Sooners lost to Texas A&M and Miami was again No. 1. The Hurricanes would hold that top spot until falling to Ohio State in a controversial overtime finish at the Fiesta Bowl for the national title. Oklahoma finished 12-2 and ranked No. 5 after topping Washington State in the Rose Bowl, 34-14.

Fall: Fell to No. 2 on Sept. 29
Replaced By: Washington
Previous Game Result: Defeated Arizona, 8-7
Key Players: Gino Torretta, QB; Micheal Barrow, LB; Ryan McNeil, CB
Finish: 11-1, No. 2 in AP Poll, lost to Alabama in Sugar Bowl, 34-13
Overview: Miami and Washington shared the national championship in 1991 and in 1992, it was ironically the Huskies who supplanted Miami as No. 1. The Hurricanes fell after a hard-fought 8-7 win over Arizona. Washington had been idle, but defeated Nebraska 29-14 in its previous contest. The Hurricanes and Huskies would flip flop between the top two spots three times before Washington fell to the same Arizona team that pushed Miami to the brink. Washington dropped three of its final four games capped with a 38-31 loss to Michigan in the Rose Bowl. Miami would complete a perfect regular season before getting handled by Alabama in the Sugar Bowl for the national championship.