25-Year Anniversary: Auburn Upsets No. 1 Florida in Thriller in Gainesville 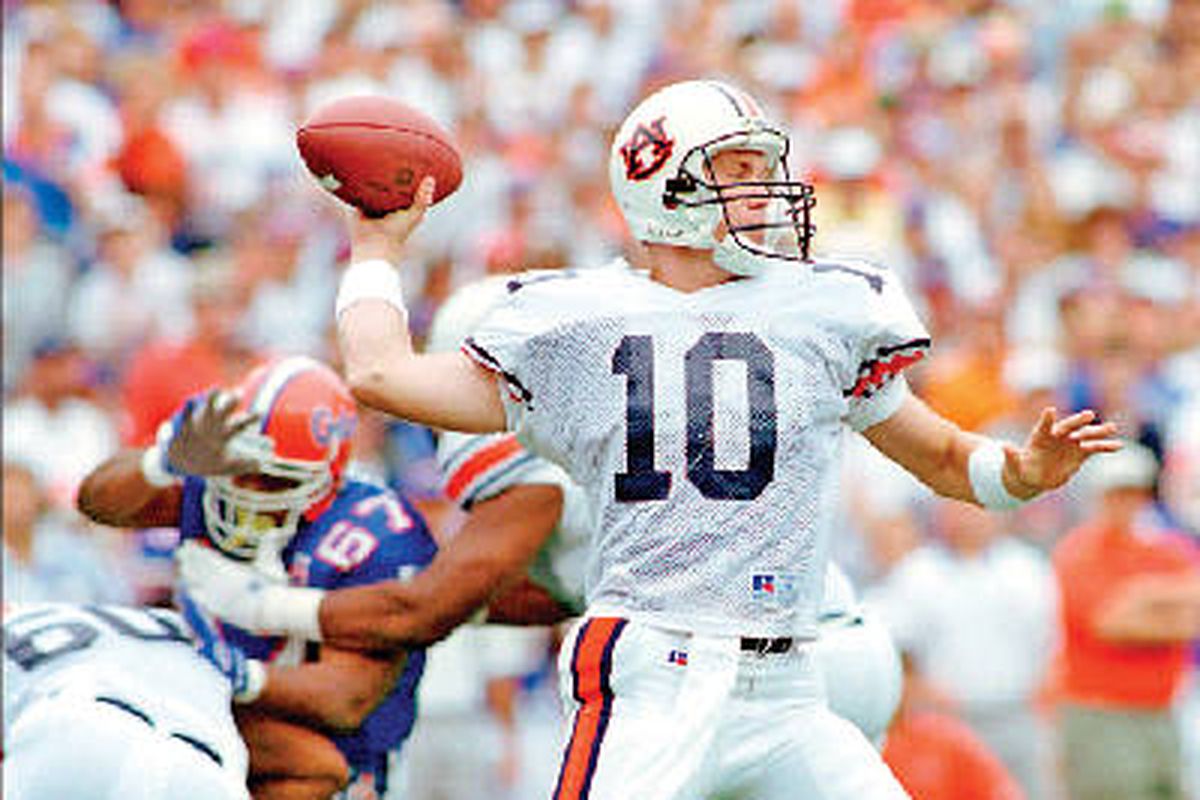 25-Year Anniversary: Auburn Upsets No. 1 Florida in Thriller in Gainesville

Just a couple Saturdays ago, Auburn came up short in a top-10 match-up with Florida in Gainesville. The starting quarterback for the Tigers, Bo Nix, was unable to do something that his father Patrick Nix was — beat a top-10 Florida team in “The Swamp”.

The older Nix and his teammates accomplished that feat on this day 25 years ago.

Despite a 17-game winning streak, Terry Bowden’s Tigers weren’t getting much respect as they arrived at Ben Hill Griffin Stadium to take on No. 1 Florida on Oct. 15, 1994. A 17-point underdog, Auburn was on probation and ineligible for postseason, but still had a statement to make and did so with a 36-33 win over Steve Spurrier and the top-ranked Gators.

The Tigers forced six turnovers on the day, which included four interceptions of Florida starting quarterback Terry Dean. The struggles from Dean led Spurrier to replace him with the young Danny Wuerffel. Wuerffel would throw a pick late in the game that would serve as a major turning point in the contest.

Auburn led 22-14 at halftime, but the second half saw the lead change hands four times. Wuerffel managed to inject life into the Florida offense. His touchdown pass to Ike Hilliard early in the fourth quarter gave the Gators their first lead at 26-22.

Patrick Nix’s touchdown pass to Andy Fuller put Auburn back in front, but it looked as though Florida would have the last laugh. With less than six minutes to go, Wuerffel found Jack Jackson on a 28-yard touchdown strike — Jackson’s third touchdown — as the Gators went back in front.

With less than 90 seconds to play and Florida nursing its 4-point lead, Wuerffel did the unthinkable. On 3rd-and-long, Wuerffel lofted a pass down the middle of the field, which was intercepted by Auburn safety Brian Robinson. It was Robinson’s third pick of the day and gave the Tigers the ball just shy of midfield.

After three straight incomplete passes from Nix, the contest hung in the balance. Nix would keep the Tigers’ hopes alive with a 14-yard strike to Thomas Bailey on 4th-and-10.

Nix then hit Willie Gosha for a 20-yard gain inside the Florida 10. On 1st-and-goal from the 8-yard-line, Nix would stun the Gators with a scoring strike to a leaping Frank Sanders with just 36 seconds remaining. The touchdown pass would serve as the game-winner for the Tigers and Nix, who passed for 319 yards.

The victory for Auburn served as its first over a No. 1 team since 1932. The Tigers’ winning streak would hit 20 before tying Georgia and losing to Alabama to conclude the 1994 season.

As for Florida, it would go on to beat Alabama in a 24-23 thriller in the SEC Championship before losing to Florida State in a Sugar Bowl rematch of a regular season tie. It would be nearly five years later before the Gators would lose another SEC home game. The 36-33 loss served as the only conference loss for Florida in 1994 and the first at home under Spurrier. It came on this day a quarter century ago.