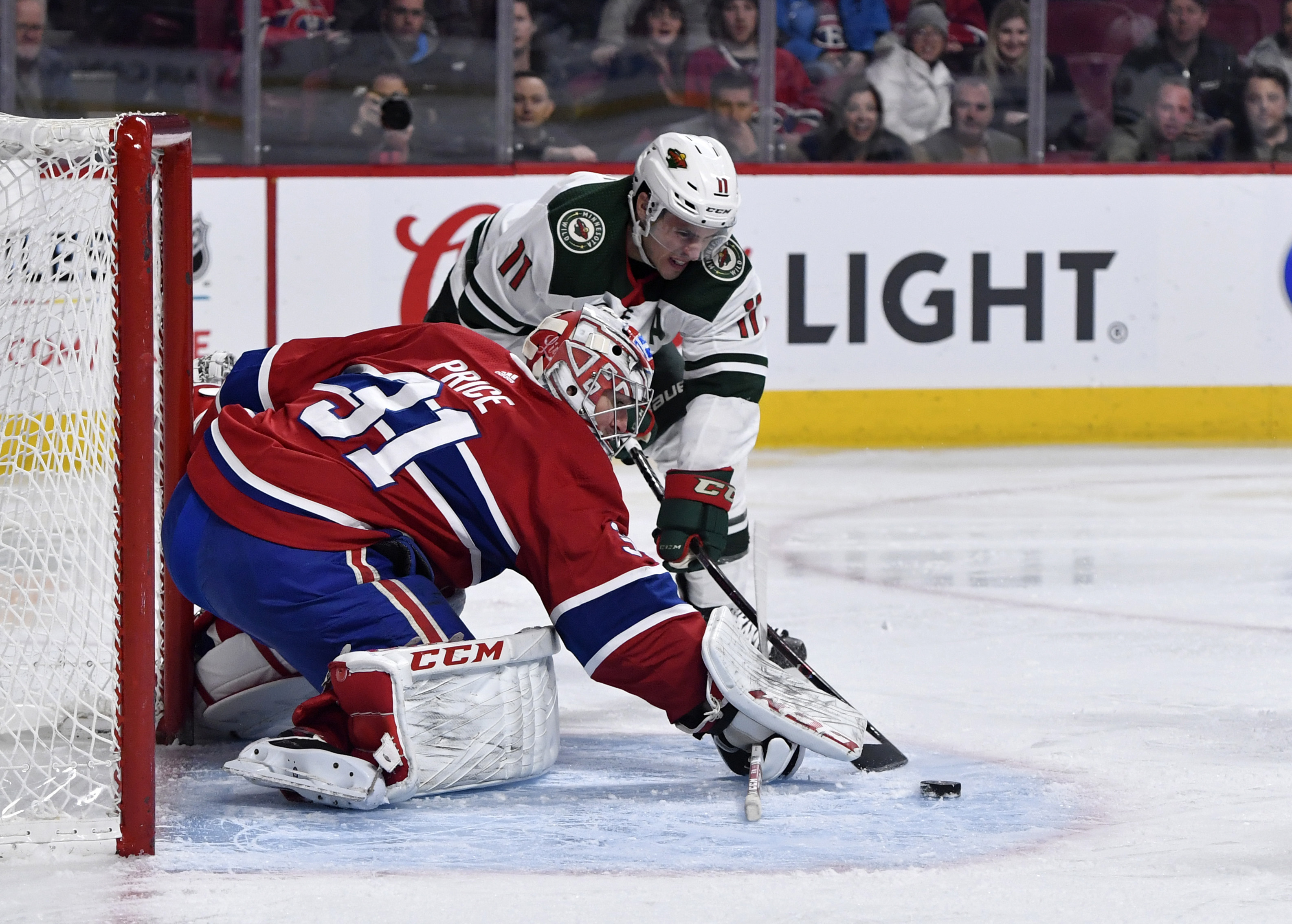 The 4-0 loss to Montreal hurt, but the comments of Jason Zucker shortly after a ‘players only’ meeting got Wild fans talking.  His inclusion of saying that Wild Head Coach Bruce Boudreau had to be better certainly raised some eyebrows.  Especially for a team which has performed so poorly through the first 7 games, the criticism of the coaching staff seemed petty and (to use a line / word from the film Shawshank Redemption) obtuse.  The winger would later apologize to his coach and expressed his regret over naming him in those ill-fated post-game comments.

So now the Wild play that same Montreal squad which outplayed and outworked them on Thursday.  Can Minnesota show some fire and earn a win on home ice or will it simply be a repeat of Thursday’s awful performance?

1st Period Thoughts:  The Wild had a shoot early, shoot often mentality to start the game as they were pulling the trigger whenever they had time and space in the offensive zone.  Keith Kinkaid wasn’t particularly tested as most of the shots were from the perimeter.  While Minnesota’s forwards tried to work for deflections, Kinkaid still had a pretty clear view of the shot.  The Canadiens would counter with some offensive pressure of their own as Cale Fleury stepped around a Wild defender before moving into the high slot to rip a shot that was steered aside by Devan Dubnyk.  The Wild’s 2nd line would cause a little havoc as Kevin Fiala was found with a pass by Eric Staal that had him all alone in the slot but his backhand bid was blocked away by Kinkaid.  The line kept battling for the puck and a point shot by Brad Hunt was knocked down by Kinkaid who was sprawling in his crease but Jordan Greenway was unable to bury the biscuit.  Minnesota would earn a power play as Ryan Hartman got raked across the grill by Artturi Lehkonen giving the Wild a 4-minute power play.  The Wild would take advantage of the power play as Mikko Koivu threaded a slap pass to Jason Zucker who redirected it by Kinkaid.  1-0 Wild.  Because of the double-minor to Lehkonen the Wild still had a full power play to work with, but they didn’t do much of anything with the 2nd power play as they were a bit too nonchalant with the puck.  The 4th line would have an excellent shift, due large in part by Gabriel Dumont‘s tenacity to track down loose pucks and the Wild kept applying offensive pressure as Dumont came close to adding to the Wild’s lead.  Minnesota was moving better and controlling the pace of play but at times they were still flirting with disaster.  Case in point, Ryan Suter would carry the puck below the dots and after sending a backhander on goal from just about parallel with the goal line he’d chase after the puck and then lose his stick.  This gave Montreal a chance for an odd-man rush and Brendan Gallagher nearly cashed in if not for a timely save by Dubnyk.  Minnesota’s 2nd line continued to cause havoc in the offensive zone as Greenway was stopped at point-blank range but they’d draw a penalty in the process.  On the power play the Wild had one great chance when Koivu managed to set up Jared Spurgeon on a no-look back door play but Kinkaid made the save to keep his team down only 1-0 going into the 1st intermission.  It was clearly Minnesota’s best overall period of the season but the old legs of Staal, Koivu and Zach Parise still seem awfully slow to me.  I’d like to see the younger players get more time on the man advantage.  Still, the Wild have a 1-0 lead and have out shot the Canadiens 19-7, and they still have a little power play time to start the 2nd period too.

2nd Period Thoughts:  Matt Dumba would take an interference penalty early and it would prove costly as the Canadiens would tie the game after a point shot by Jeff Petry drew a big rebound that was pounced on by Tomas Tatar for an easy goal.  1-1 game.  Montreal would continue to attack and they’d quickly take the lead as a turnover in the offensive zone by Hartman ultimately ended up on the stick of Philipp Danault who backhanded a puck that went off a sprawling Dubnyk’s skate and in.  Just 16 seconds between each Montreal goal, 2-1 Canadiens to stunned and resigned silence by the home crowd.  The Wild would send out its 4th line and while they were able to win a few battles for pucks along the wall, they were not able to turn that puck possession into any kind of offensive pressure.  Minnesota would have some great chances as Zucker was denied by Kinkaid on acrobatic glove save.  The Wild kept pressing for the equalizer as a point shot by Spurgeon was redirected by Hartman but would miss wide.  Montreal would go back on the attack as they outworked the Wild in a battle in the corner of the Minnesota end that resulted in Perty charging in that forced Dubnyk to make a nice save.  The Wild would push back offensively as Staal set up Hartman for a redirection that Kinkaid stopped and he’d momentarily lose track of the puck but it was escorted out of danger by Max Domi.  Minnesota would generate more pressure with a late power play and after a few close chances, including a sequence where Eric Staal missed on a wide open net it appeared they were on their way to another frustrating finish.  Yet late in the period a shot by Staal that was redirected on goal by  Luke Kunin drew a rebound that Marcus Foligno pounced on to tie it back up at 2-2.  A decent recovery after a significant early period stumble.

3rd Period Thoughts:  An early defensive breakdown in the 3rd period led to Montreal’s go-ahead goal as a shot by Gallagher drew a rebound from Dubnyk that was stuffed home by Danault who had his 2nd goal of the game.  3-2 Montreal.  The Canadiens continued to outwork the Wild and Domi set up Shea Weber for a blast that was gloved by Dubnyk.  Minnesota didn’t seem to have a lot of push back as Montreal continued to threaten the Wild offensively as Tatar nearly cashed in.  The Wild would try to strike back and a steal by Ryan Donato in the offensive zoned led to a quick shot that sailed up and over the goal.  A holding penalty by Paul Byron would give the Wild a much-needed power play and they’d make it count as Brad Hunt would blast a one-timer by Kinkaid that rang off the post and in.  3-3 game.  The Wild would then immediately take another penalty as Dumba would get sent to the box for cross checking.  Minnesota’s penalty kill was a extra aggressive at challenging the puck carrier and forcing a few turnovers and was able to clear the zone and beyond a one-timer by Tatar the Canadiens’ power play didn’t do much of anything.  The Wild would get the go ahead goal a few minutes later as a quick breakout led to Zucker making a pretty diagonal pass to Parise who one-timed it over the shoulder of Kinkaid off the rush.  4-3 Wild.  Minnesota was doing its best to contest every inch of ice as Montreal was trying to work for the equalizer.  The Canadiens would crash the Wild crease as Dubnyk struggled to corral a rebound as Lehkonen tried to jam it home but fortunately the Wild goalie was able to cover it up for a whistle.  Montreal would pull Kinkaid with about a 1:30 left in the period.  Minnesota was trying to flip the puck out of the zone whenever they had a chance which helped make most of the time the Canadiens’ spent with the extra attacker to be fairly uneventful and they’d survive with a 4-3 victory.

C – Alexander Khovanov (Moncton, QMJHL) ~ the feisty Russian had an assist and went 12-for-20 on his draws in Moncton’s 6-5 overtime win over Acadie-Bathurst.  The Wildcats played the Titan the next night and he had another 2 helpers.  Khovanov has 5 goals, 17 points, 17 PIM’s and is a +11 in 9 games.

RW – Shawn Boudrias (Cape Breton, QMJHL) ~ the power forward had an assist on 4 shots in Cape Breton’s 5-3 over Halifax.  Cape Breton played the Moosheads on Saturday and the Terrebonne, Quebec-native had a goal in a 8-2 rout of their maritime rival.  Boudrias has 10 goals, 18 points, 15 PIM’s and is a +10 in 12 games.

RW – Nick Swaney (Minnesota-Duluth, NCHC) ~ the junior winger likes to shoot the puck and he had a goal and an assist on 7 shots in the Bulldogs’ 6-2 loss to Wisconsin on Friday.  Swaney has 2 goals, 3 points, 2 PIM’s and is a -2 in 3 games.

G – Hunter Jones (Peterborough, OHL) ~ Jones continues his strong start to the season with a 33-save performance in Peterborough’s 3-1 over Ottawa earning him 1st star honors.  Jones has a 7-1 record, 2.77 goals against average and a .906% save percentage and 1 shutout.

C – Ivan Lodnia (Niagara, OHL) ~ The team decided to give the former 3rd round pick more ice time and opportunity by sending him back to major junior.  He wasted little time re-establishing his scoring touch as he had a goal and another in the shootout to give the Ice Dogs a 5-4 shootout win over Guelph on Saturday night.

D – Fedor Gordeev (Guelph, OHL) ~ the lanky defenseman is probably not going to be a big point producer but he does chip in offensively once in a while as he had an assist on 7 shots in the Storm’s against Niagara.  The Toronto-native has 4 assists, 2 PIM’s and is a -4 in 9 games.