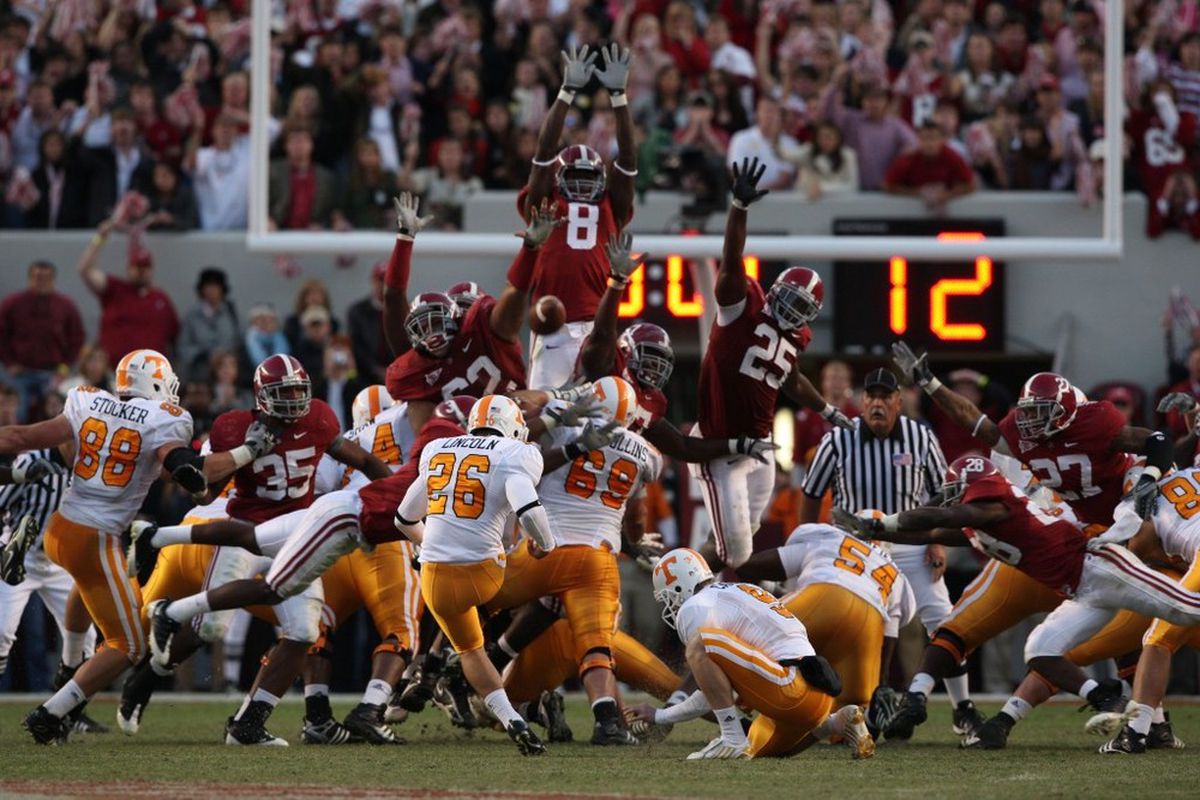 On Oct. 24, 2009, a 3-3 Tennessee team came into Bryant-Denney Stadium and put the fear of God into top-ranked Alabama. The Volunteers had a chance to win the game as time expired, but a heroic play from a mountain of a man helped preserve the 12-10 victory for the Crimson Tide.

Alabama didn’t score a touchdown during the rivalry contest that had traditionally been played on the “Third Saturday in October”, but that didn’t look like it would matter one bit. The Crimson Tide had managed just four Leigh Tiffin field goals and led 12-3 with the football and less than four minutes remaining after a roughing the kicker call on a punt had given them a first down.

The 15-yard penalty looked to be the final nail in the Tennessee coffin, but eventual Heisman Trophy winner Mark Ingram fumbled on the very next play and the Volunteers took over in Alabama territory. It took Tennessee eight plays to go the 43 yards as quarterback Jonathan Crompton capped the drive with an 11-yard touchdown pass to Gerald Jones for what would be the game’s only touchdown.

Still, without any timeouts and 1:19 on the clock, the score looked to be too little and too late. That was until the Volunteers recovered Daniel Lincoln’s ensuing onside kick and possessed the football at their own 41-yard-line.

With first-down completions from Crompton to Jones and then Luke Stocker, the Volunteers were able to march inside the Alabama 30-yard-line. With four seconds on the clock, Lincoln trotted out to attempt the 44-yard field goal.

Lincoln had been just 1-for-3 on the day, but had a chance to be the hero. All-American defensive tackle Terrence Cody made sure that didn’t happen. The 350-pound Cody was able to get a hand on Lincoln’s kick for his second block of the day and the football fell harmlessly to the field and Alabama survived.

Although Tennessee was unable to pull off the monumental upset and hasn’t defeated Alabama since, Lane Kiffin’s team did manage to win four of the next five games to notch a winning season. Crompton passed for 265 yards in the loss. Ingram rushed for 99 yards in the victory.

As for Alabama, the Crimson Tide would go on to finish 14-0, win the SEC and their first of five national championships under Saban. It remains the only victory under Saban in which Alabama failed to score a touchdown and it came on this day one decade ago.