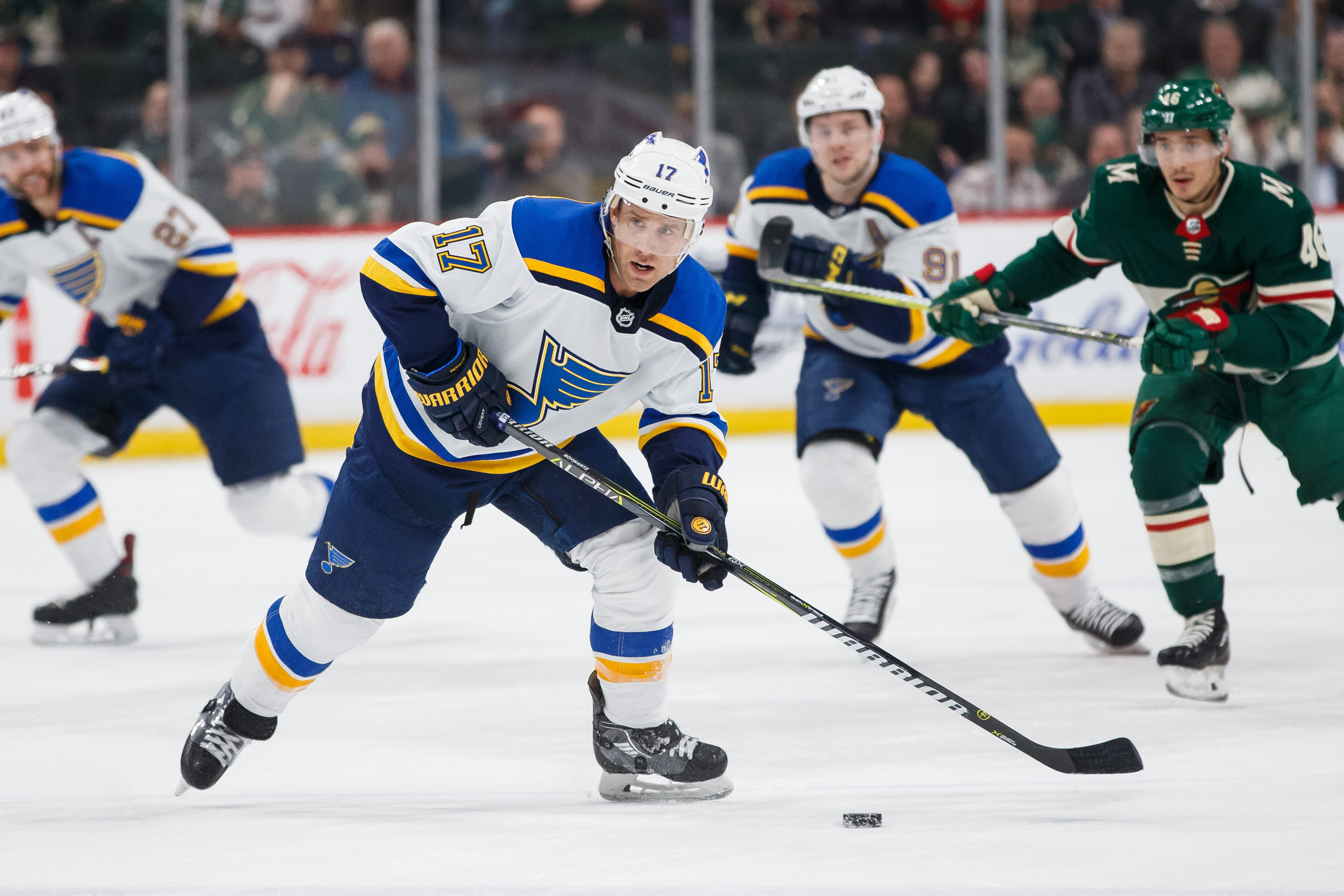 Halloween candy is one of the perks of the holiday which embraces something resembling a spooky carnival for a few hours.  You have the good candy; Snickers, Reese’s Peanut Buttercups and Nestle’s Crunch bars.  The Minnesota Wild likely would get stuck with the ‘nasty’ Halloween treats like Smarties, Milk Duds and worst of all candy corn.  The Wild face that same Blues squad which shut them down on Wednesday.

With more road trips on the way that will fill up most of November, it is important the Wild make the most of their home games even if they happen to be against the defending Stanley Cup champion.  The Blues are hoping to climb their way to the top of division, can the Wild earn another victory on home ice?

1st Period Thoughts:  Minnesota Wild had great energy to start the game, flying all over the Blues’ end and causing lots of havoc.  The Wild would strike first as a Jared Spurgeon shot was redirected by Jake Allen by Marcus Foligno to give Minnesota a 1-0 lead.  The good feelings were short-lived as the Blues went on the attack and winning the physical battle for the puck in the corner before a wrist shot by Ivan Barbashev was deflected by Mackenzie MacEachern who snuck it by Devan Dubnyk.  1-1 game.  The two clubs would trade chances with one another over the next few minutes of the game as the play opened up a bit.  The Wild were a bit careless with the puck, dumping it in repeatedly in the face of the physical play by the Blues but more or less just throwing it away each and every time they did that.  With the Blues having played the night before, I am sure keeping the play up-tempo to tire out St. Louis was probably a big talking point from the coaching staff.  A hooking penalty on David Perron gave the Wild its first power play of the game.  Minnesota wasn’t able to do much with the power play as the Blues’ penalty killers kept the Wild wasting time just trying to exit their own zone.  The Blues would find the back of the net as Carl Gunnarsson ripped a shot 5-hole on Dubnyk.  2-1 Blues.  It was a yogurt soft goal and killed what energy the home crowd had.  The Blues would get a power play on a Suter holding call and St. Louis looked to add to its lead as Perron and Alex Pietrangelo had number of shooting opportunities they fortunately missed high and wide on.  Minnesota would escape without further damage and try to go back on the attack.  Yet poor choices with the puck continued to thwart whatever positive momentum the Wild were able to create as a Mikko Koivu gaffe with the puck nearly resulted in a goal as the final horn sounded with Minnesota trailing 2-1.

2nd Period Thoughts:  The Wild would strike early in the period as Kevin Fiala pounced on a puck off a faceoff in the Blues’ zone that seemed to catch everyone by surprise including Jake Allen.  2-2 game.  Minnesota continued to attack and Jordan Greenway missed a golden opportunity a few minutes after Fiala’s goal but the Blues would take a penalty shortly afterwards.  The Wild would take advantage of the power play opportunity as Brad Hunt feinted at a shot before feeding it to Eric Staal who sent a pass to Mats Zuccarello who wired it by Allen.  3-2 Wild.  The Blues would try to answer back and Brayden Schenn came close but his wrist shot missed wide of the Minnesota goal.  With Allen being pretty shaky the Wild were showing a little more assertiveness in the offensive zone.  After failing to add to its lead, the Wild tried to play more conservatively as they decided to protect their lead.  Minnesota would find the back of the net as Mikko Koivu found the twine behind Allen who continued to be fighting the puck.  4-2 Wild or would it?  The goal was reviewed as the Blues were arguing there was goaltender interference on Zach Parise who was screening Allen on the play.  The officials agreed and Koivu’s goal was wiped out as the home crowd voiced their displeasure and with good reason as Parise was parked outside of the crease and didn’t move into Allen at all.  The Wild would spend the rest of the period sitting back and trying to prevent St. Louis from tallying a momentum killing late-period goal.

3rd Period Thoughts:  The period started with a cautious pace and a bit of an aire of anxiety in the home crowd.  The Blues would tie the game as Sammy Blais tackled Luke Kunin and then the puck is swept up by Blais who fires a shot by Dubnyk short side.  3-3 game on another weak goal given up by Dubnyk.  Making matters worse was the fact the Wild would get tagged for a bench minor for their outrage at the non-call on Blais’ tackle.  Minnesota would manage to kill off the Blues power play but they’d go back a man down again as Matt Dumba was called for tripping drawing more boo’s from the already annoyed home crowd.  The Blues were looking for the go ahead goal and Schenn had a great chance early that was absorbed by Dubnyk.  Minnesota would kill another penalty as the Wild seemed to have a bit of a chip on their shoulder after some weak calls as Vince Dunn and Ryan Hartman exchanged some shoves after the whistle.  The physical play started to ramp up as both clubs were taking their opportunities to finish checks in search of that critical turnover.  Each shot was greeted with a gasp of anxiety in the closing minutes of regulation as the game went to overtime.

Overtime Thoughts:  The Blues controlled possession as the Wild seemed unable to stay with St. Louis’ skaters very well.  St. Louis would bury the game winner on a long shot by Ryan O’Reilly which fooled Dubnyk to give the Blues a 4-3 victory to an apathetic response from the home crowd who is growing used to being disappointed.

With the Minnesota Wild roster returning to health, that has meant Iowa has seen the return of veterans Gabriel Dumont and Gerald Mayhew to the lineup and all they have done since they returned is lead the way.  On Friday, playing in Milwaukee was a defensive struggle.  Both teams respected each other’s ability to score but Iowa was patient and measured in its attack and not letting their aces feel comfortable.  Kaapo Kahkonen was tremendous making timely saves including stopping Laurent Dauphin on a penalty shot in the 2nd period to keep the game knotted at 0-0.  Early-ish in the 3rd period, Mayhew would find some room and take a pass from Will Bitten and find the twine behind Troy Grosenick.  Iowa would continue to force the Admirals to defend in its own zone and they were able to limit Milwaukee’s offensive chances down the stretch to earn a 1-0 victory.  Kaapo Kahkonen had 33 saves in the shutout.

C – Alexander Khovanov (Moncton, QMJHL) ~ the talented Russian had a big night on Halloween with 2 goals and an assist and went 6-for-8 on his draws in the Wildcats’ 10-4 win over Cape Breton.  On Saturday, the two teams battled again this time to a 2-1 OT win for Moncton with Khovanov buring two goals, including the game winner.  Khovanov has 12 goals, 30 points, 23 PIM’s and is +20 in 14 games.

C – Sam Hentges (St. Cloud State, NCHC) ~ the former Totino-Grace star continues to lead the way for the Huskies as he had a goal and two assist on 3 shots in St. Cloud State’s 4-3 loss to Princeton last evening.  He had another goal and an assist on 3 shots the next night as the Huskies tied the Tigers 5-5.  Hentges has 5 goals, 11 points, and is a -1 through 6 games.

F – Nikita Nesterenko (Chilliwack, BCHL) ~ the Boston College commit had a goal and two helpers in the Chiefs’ 7-1 win over Merritt on Wednesday.  Nesterenko has 5 goals, 16 points, 15 PIM’s in 18 games.