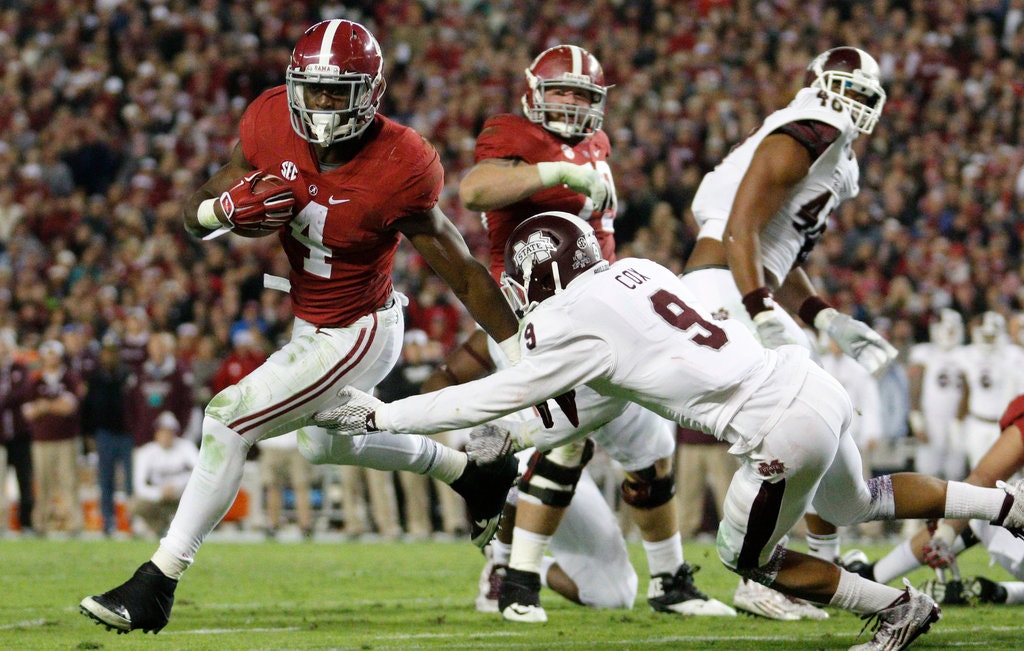 Imagining Mississippi State sitting atop the polls seems hard to do, but it wasn’t long ago that it was the case. During the 2014 season under head coach Dan Mullen, the Bulldogs would ascend to the top spot in the AP Poll for the first time in program history and would stay there for five weeks.

The run came to an end on this day five years ago in a top-5 match-up. Against an Alabama team that had won three national championships in the previous five years, Mississippi State fell, 25-20.

Mississippi State was 9-0 as it arrived at Bryant-Denny Stadium to take on No. 4 Alabama on Nov. 15, 2014. Unranked in the preseason, the Bulldogs ascension began with three consecutive wins over No. 8 LSU, No. 6 Texas A&M and No. 2 Auburn.

To that point, quarterback Dak Prescott and the high-powered Mississippi State offense had scored at least 34 points in eight of its first nine games. On that Saturday in Tuscaloosa, the Bulldogs were kept off the scoreboard until the final seconds of the first half and out of the end zone until the fourth quarter.

The Crimson Tide raced to a 19-0 lead. After a tackle of Mississippi State running back Josh Robinson in the end zone for a safety and a field goal by Adam Griffith field goal gave Alabama a 5-0 advantage after a quarter, it found the end zone twice in the second quarter. On the first touchdown drive, senior quarterback Blake Sims was a perfect 4-for-4 on the drive before finding Amari Cooper for a 4-yard touchdown. On the Crimson Tide’s next possession, Sims and Cooper hooked up for a 50-yard completion to open the drive before tailback Derrick Henry punched it in from a yard out one play later.

The contest looked as though it may become a rout, but the next 13 points belonged to Mississippi State. Evan Sobiesk knocked home a pair of short field goals after drives stalled in the Alabama red zone on the final drive of the first half and the first drive of the second.

Mississippi State would miss another scoring opportunity late in the third quarter when Prescott was intercepted for the second time — this time by Cyrus Jones — in the end zone. The Bulldogs would finally get into the end zone after starting with a short field following a second 3-and-out by the Alabama offense in three possessions.

Starting at the Alabama 38-yard-line, it took just five plays to find paydirt with less than a minute gone in the final quarter. After four straight run plays, Prescott would find Fred Ross for the 4-yard touchdown to cut the lead to six at 19-13. But as Alabama has so often under head coach Nick Saban, it responded.

With momentum seemingly swung, the Crimson Tide put together a 15-play, 76-yard drive that ate more than six minutes off the clock. Sims would convert three third downs on the march — two with his legs and one with his arm — before T.J. Yeldon scored on a 7-yard touchdown run with more than eight minutes to play.

The ensuing Mississippi State drive would be the fourth into the Alabama red zone that did not result in a touchdown. With less than five minutes to play and the Bulldogs facing second down from the Alabama 20-yard-line, Prescott was intercepted by Landon Collins for the signal-caller’s third interception of the day.

With 15 seconds to play, Prescott would throw his second touchdown — a 4-yard scoring toss to Jameon Lewis — to cut the lead to five. The Crimson Tide recovered the ensuing onside kick and ran out the clock.

Mississippi State finished the night with 429 yards of offense to 335 for Alabama, but the mistakes proved too costly. Prescott passed for 290 yards and rushed for 82 in the defeat, but couldn’t overcome the three interceptions. Sims passed for 211 yards for an Alabama offense that did not turn the ball over.

After ascending to No. 1, Mississippi State would lose three of its four remaining games, including a 49-34 Orange Bowl loss to Georgia Tech, to close the year. Alabama would go on to win the SEC before losing to eventual national champion Ohio State in the Sugar Bowl as part of the first-ever College Football Playoff.

Mississippi State would finish No. 11 in the final AP Poll and hasn’t been ranked higher than No. 14 since. The Bulldogs’ last game as a No. 1 team came on this day five years ago.