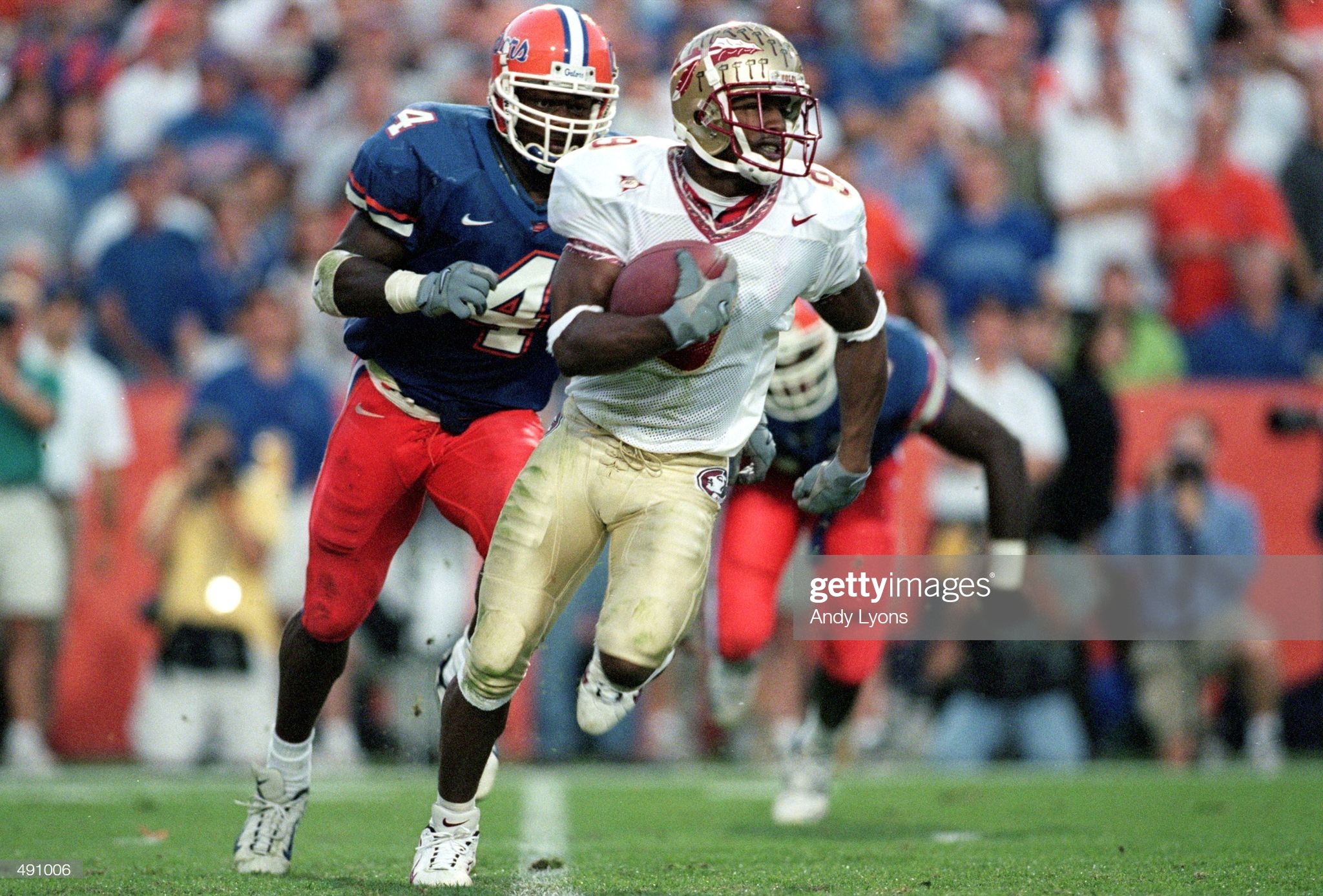 For every meeting during the 1990s, Florida State and Florida both arrived for the contest ranked in the top 10. The final one of those was a thriller that happened on this day 20 years ago.

Florida State was undefeated and ranked No. 1 as it arrived in Ben Hill Griffin on Nov. 20, 1999. Florida was 9-1 and ranked third, but the Gators had ended an undefeated FSU’s national championship hopes in its last trip to Gainesville in 1997. The 1999 contest would come down to the final play, but the Seminoles ultimately prevailed, 30-23.

FSU wasted no time drawing first blood as All-American wide receiver Peter Warrick capped the opening drive with an electrifying 4-yard touchdown run in which he reversed field. FSU led 7-0, but there wouldn’t be another touchdown until the midway point of the third quarter.

For the remainder of the first half, the Seminoles and Gators traded a pair of field goals. After Florida kicker Jeff Chandler’s third field goal of the day cut the lead to four early in the third quarter, the Gators used their defense to take their first lead.

Three plays after Chandler’s field goal, cornerback Bennie Alexander would step in front of a pass from Florida State quarterback Chris Weinke and return it 43 yards for the go-ahead touchdown. With less than eight minutes remaining in the third quarter, Florida led 16-13, but that lead would be short-lived.

With less than five minutes to go in the quarter, FSU kicker and eventual repeat Lou Groza Award winner Sebastian Janikowski connected on a 54-yard field goal, after his first make was negated by a delay of game penalty, to knot the contest at 16 apiece. The Seminoles went ahead for good with less than a minute to play in the third on a 2-yard touchdown run by Jeff Chaney after linebacker Tommy Polley blocked Alan Rhine’s punt to set FSU up just outside the red zone.

The Gators would march inside the Florida State 10-yard-line early in the fourth quarter, but after a holding penalty, quarterback Doug Johnson forced a pass into coverage that was picked off by FSU safety Chris Hope near the goal line. After an exchange of punts, the Seminoles managed to go 78 yards with a pair of long passes accounting for 65 of those yards. After a 38-yard completion from Weinke to Warrick moved the ball to the Florida 30, Weinke capped the drive with a 27-yard scoring strike to Marvin Minnis, who made a nice over-the-shoulder grab with just over six minutes remaining.

Down 30-16, Florida cut the lead in half when Johnson found Brian Haugabrook from three yards out with less than four minutes to play. The ensuing onside kick was failed, but the Gators would get one throw into the end zone as time expired. Jesse Palmer’s Hail Mary pass was tipped away.

Florida finished with nearly 100 more yards of offense than FSU, but turned the ball over twice, had a punt blocked and committed 15 penalties totaling 93 yards. Weinke passed for 263 yards in the victory while Palmer and Johnson combined for 380 yards in the loss. Warrick finished with 109 yards from scrimmage to lead the Seminoles.

The loss for Florida would begin a downward spiral as it lost to Alabama in the SEC Championship and then Michigan State in the Citrus Bowl to finish 9-4 — tying the most losses under head coach Steve Spurrier. FSU would go on to defeat Virginia Tech in the Sugar Bowl for the national championship to become the first wire-to-wire No. 1 ever and deliver legendary head coach Bobby Bowden his only perfect season.

The 1990s was a memorable decade for FSU as was the final game of the decade. That contest happened on this day 20 years ago.