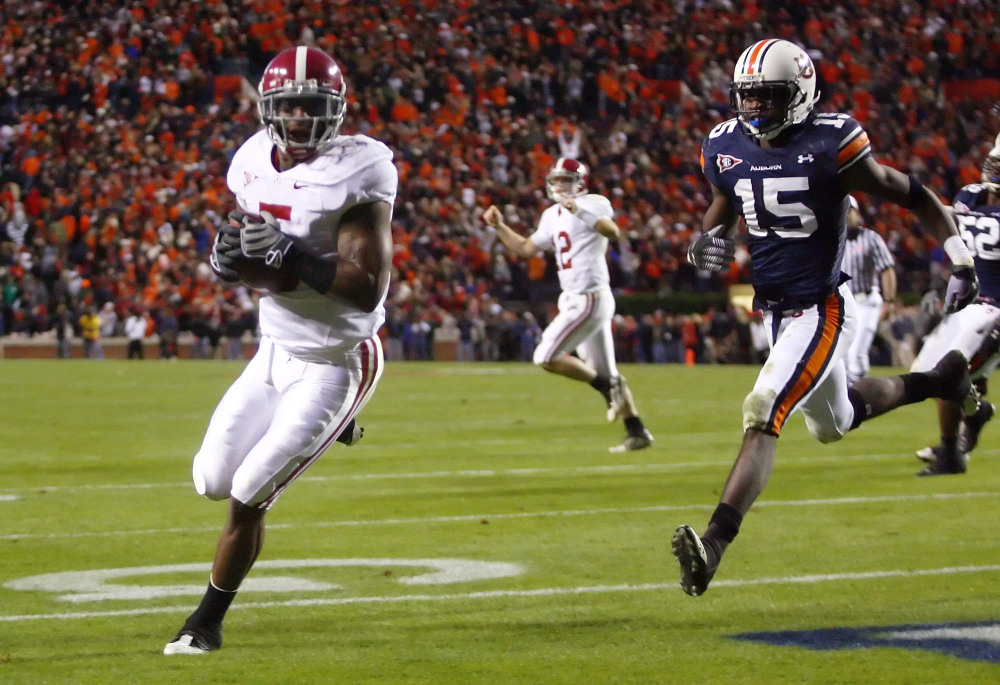 In his second year as head coach at Alabama, Nick Saban’s Crimson Tide ended a 6-game losing streak to Auburn with a 36-0 victory. Alabama however, hadn’t won on the plains since 2001 and in Saban’s third season, the Tigers weren’t going to make things easy.

Alabama was 11-0 and ranked No. 2 in the nation on Nov. 27, 2009 as it headed to Jordan-Hare Stadium to take on an Auburn team with a record of 7-4. The Crimson Tide didn’t lead until 84 seconds remained on the clock in a thrilling 26-21 win that kept their national championship aspirations intact on this day 10 years ago.

The contest hung in the balance when Alabama took over, down 21-20, with just over eight minutes to play. Known largely as a game manager, quarterback Greg McElroy would orchestrate a 15-play, 79-yard drive that culminated in a game-winning 4-yard touchdown pass to running back Roy Upchurch.

McElroy threw for five first downs on the drive while connecting with four different receivers on the march. After a 17-yard completion to running back Trent Richardson set Alabama up at the Auburn 11 and a pair of Richardson runs totaling seven yards, the Crimson Tide faced 3rd-and-3 from the 4. The Tigers bit on McElroy’s play-action fake as he found Upchuch on the move for the go-ahead score.

The 2-point conversion attempt was failed and with 1:24 to play, there was time for Auburn to answer. The Tigers made it as far as the Alabama 37-yard-line, but Todd’s last-ditch effort throw for the end zone was knocked away. The win for Alabama would be its third of the year in which it trailed in the fourth quarter.

Auburn used a bit of trickery to race to a 14-0 lead less than 10 minutes into the contest. Wide receiver Terrell Zachery scored a 67-yard touchdown on a reverse on the Tigers’ opening drive before they doubled the lead on a 1-yard touchdown pass from Todd to Eric Smith after recovering an onside kick.

By halftime, Alabama had managed to draw even with a touchdown run from Trent Richardson and a 33-yard touchdown pass from McElroy to tight end Colin Peek. With the score tied 14-14, Auburn went back in front on its second play of the third quarter when Todd found Darvin Adams for a 72-yard touchdown after a double move.

After missing an opportunity to give his team the lead late in the first half, Alabama kicker Leigh Tiffin would add a pair of field goals in the third quarter — one after a Mark Barron interception of Todd — to pull the Crimson Tide to within one. The Alabama defense yielded just 42 yards to Auburn on the Tigers’ final five drives.

Adams led all players in yards from scrimmage with 138 yards receiving on four catches. McElroy passed for 218 yards and the two scores in the win. Julio Jones led Alabama with 83 yards receiving. The Auburn defense held Alabama running back and eventual Heisman Trophy winner Mark Ingram to just 30 yards rushing on 16 carries.

Alabama would go on to defeat reigning national champion Florida in the SEC Championship 32-13 to advance to the BCS National Championship. The Crimson Tide then defeated Texas 37-21 for the first of Saban’s five national championships at the helm. The biggest comeback win for Alabama that season came against its most bitter rival in the “Iron Bowl” and on this day a decade ago.