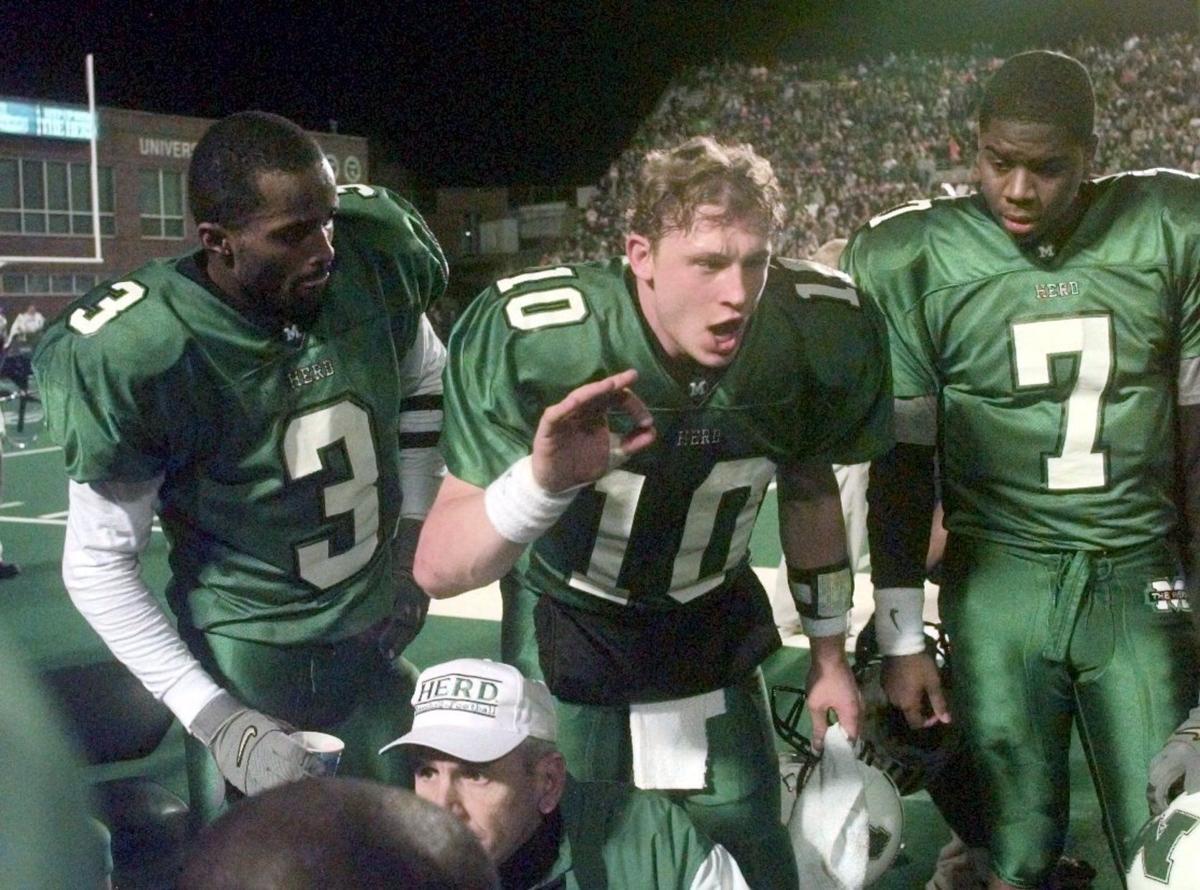 College football conferences have certainly gone through numerous changes over the last two decades, but during the late-1990s and early 2000s, the Mid-American Conference was dominated by Marshall.

From 1997 to 2002, the Thundering Herd played in every MAC Championship, winning five of them. Of those, the most thrilling and perhaps the most notable came on this day 20 years ago.

Three years removed from a 1-AA national championship in its final season as an FCS school, Marshall was looking for its first perfect season as an FBS program as it got set to host Western Michigan for the MAC Championship on Dec. 3, 1999. The Thundering Herd would fall behind by 23 points before rallying for a thrilling 34-30 victory.

The contest was decided with four seconds to go when Marshall quarterback and game MVP Chad Pennington found Eric Pinkerton for the game-winning 1-yard touchdown. The toss was the third of the second half for Pennington as the Thundering Herd claimed their third straight MAC title upon entering the conference.

Marshall was 11-0 coming in and ranked No. 11 in the country, but it was the 7-4 Broncos that dominated early on. Western Michigan had yielded minimal resistance when the teams met late in the regular season in Kalamazoo — a 31-17 victory for Marshall. In the rematch in Huntington, Western Michigan led 20-0 at halftime and 23-0 early in the third quarter behind a touchdown pass from Tim Lester to Corey Alston, a short touchdown run by Robert Sanford and three field goals from Brad Selent.

The remainder of the third quarter would be dominated by Marshall as Pennington threw touchdown passes to Nate Poole and James Williams and Doug Chapman scored on a 24-yard touchdown run. The Thundering Herd took their first lead of the night on Chapman’s 2-yard scoring run early in the fourth quarter.

Looking for its first MAC title since 1988, Western Michigan was stunned, but not finished. Lester calmly led a 75-yard scoring drive capped with a 4-yard touchdown toss to Jake Moreland midway through the quarter. The Broncos got a stop on the next Marshall possession, but failed to put the game away as the Thundering Herd regained possession at their own 26-yard-line with more than three minutes to play.

Not known for his legs, Pennington busted a 33-yard run on the final drive just a play after keeping Marshall’s hopes alive with a fourth-down conversion throw to Williams. The long scramble was aided by a Western Michigan personal foul as Marshall moved inside the 15-yard-line with less than a minute to play.

Three plays later, Pennington and Williams connected for a first down just shy of the goal line. Pennington spiked the ball to stop the clock before being stopped on a quarterback sneak with seven seconds left. After using his last time out, Pennington moved slightly to his right before hitting a diving Williams for the winning score.

The Broncos would get one more play from scrimmage, but Lester’s Hail Mary was intercepted.

Pennington passed for 284 yards and an interception en route to earning MAC Championship MVP honors for a second straight year. Lester finished with 282 yards passing and was intercepted twice. Sanford led all rushers with 163 yards on 32 carries while Western Michigan’s Steve Neal was the top receiver with 105 yards. Williams led the Thundering Herd with 94 yards receiving on seven catches.

Under head coach Bob Pruett, Marshall would go on to defeat BYU in the Liberty Bowl, 21-3, to complete the perfect season and finish No. 10 in the final AP Poll. That remains the highest national ranking for the Thundering Herd as an FBS program.

As for the Broncos, they wouldn’t capture that coveted MAC title until 2016 when they started 13-0 under head coach P.J. Fleck. Western Michigan let a huge opportunity slip through its hands on this day two decades ago.