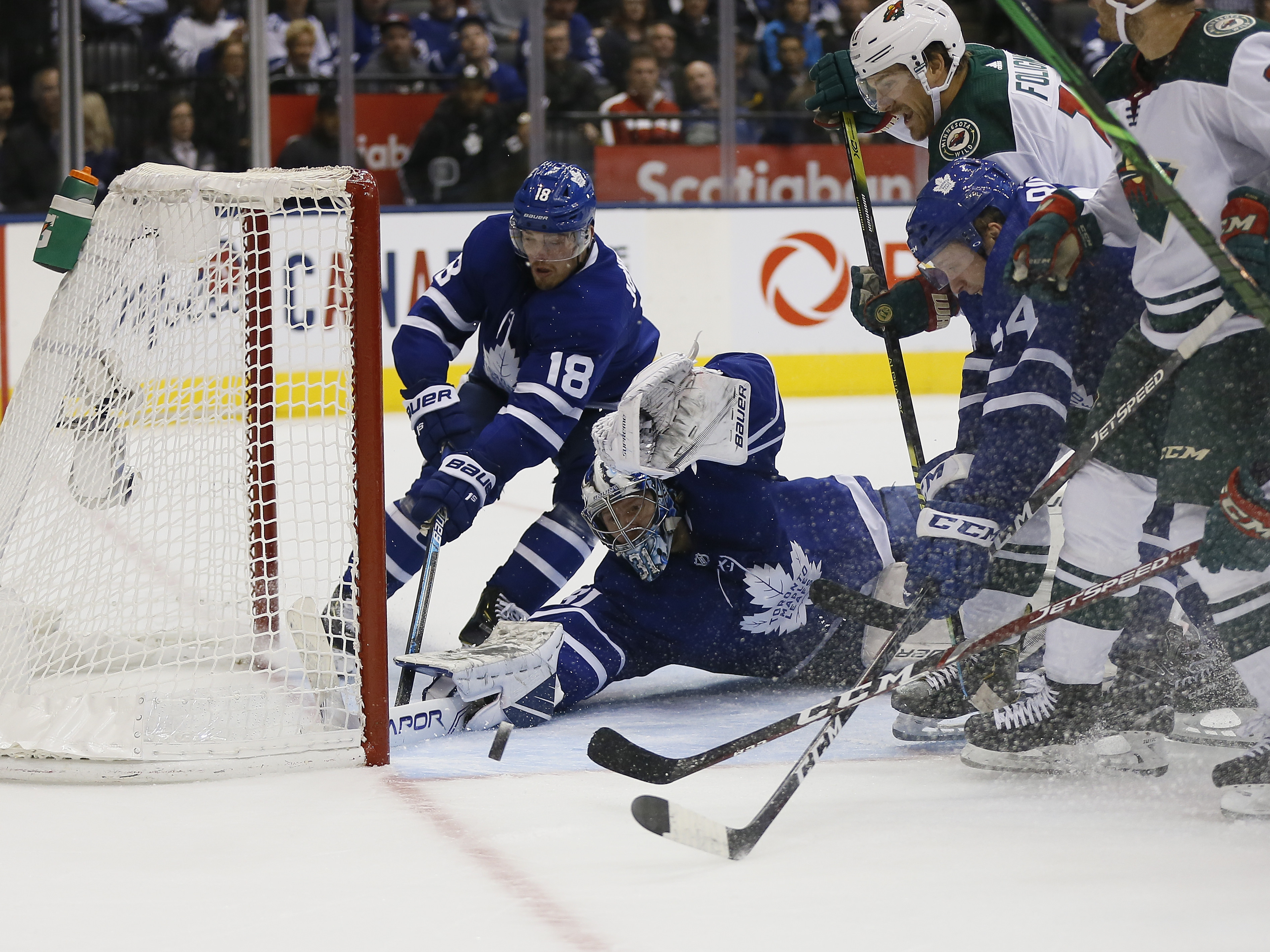 A recent survey stated that 45% of those who make New Year’s resolutions say losing weight is their goal.  It makes sense since most of us, myself included, could stand to lose a few pounds (or more).  However as most of us know, most of those that make such a pledge fail to follow through with it.  The Minnesota Wild were playing well on Sunday, leading 1-0 against the Islanders but instead of adding to their lead the team let up just a bit and New York was able to rally for a 3-1 victory.

As the Toronto Maple Leafs come to town, will the Wild learn from their painful lesson from Sunday?  If the Wild find themselves holding onto a lead, will they not let up as they did or will they have to learn that painful lesson one more time in 2019?

1st Period Thoughts:  With Mikko Koivu‘s return, it also meant the GEEK line was reunited as Joel Eriksson Ek was moved back to the 3rd line along side Luke Kunin and Jordan Greenway.  The Maple Leafs were using their speed effectively early as Kasperi Kapanen turned on the jets to get behind the Wild defense only to be foiled by a diving poke check by Devan Dubnyk.  Minnesota struggled to get shots on goal and they’d try to use their superior size and strength to put Toronto on its heels in its own zone.  The Wild were looking to force turnovers in the neutral zone and quickly transition into the Maple Leafs’ zone as Eric Staal intercepted a pass and he’d dish it across to Ryan Donato who ripped a shot towards the goal that missed high.  The Maple Leafs would strike first as John Tavares drew defenders towards him and then fed a short pass to Alexander Kerfoot who one-timed a shot by Dubnyk.  1-0 Maple Leafs.

GOAL. Kerfoot one-times a Tavares feed past Dubnyk to open the scoring.

The GEEK line would draw a penalty to give the Wild its first opportunity with the man advantage.  Minnesota’s power play moved the puck reasonably well, setting up point shots from its big shooting defenseman Brad Hunt and Matt Dumba but Frederik Andersen was up to the task.  The Wild would come up empty with the power play but the game would appear to open in the next few shifts.  Minnesota was trading rushes with Toronto, but often at the critical moment the Wild would try to thread a pass through multiple defenders only to see their potential scoring chance disappear with a turnover.  The Maple Leafs would get their first power play as Ryan Hartman hooked Cody Ceci.  The Wild would get the big kill by limiting the Maple Leafs’ time and space.  Shortly after the kill, Dmytro Timashov would cross check Marcus Foligno to the face.  Minnesota would have an excellent chance early in the power play as Koivu set up Zach Parise for a shot from the slot that Andersen had to fight off.  After the quality chance by Parise, the Maple Leafs gave Minnesota’s power play fits in just trying to get set up in the offensive zone.  The Maple Leafs would go back on the attack with its top line and it was Auston Matthews managing to poke a puck just inside the left post as Dubnyk tried to cover it up with his glove but wasn’t faster than Matthews’ stick.  2-0 Maple Leafs.  William Nylander would get credit for the goal, but it didn’t matter as it was another late period goal given up by the Wild.

2nd Period Thoughts:  The Maple Leafs controlled the pace of play through the first few minutes of the period as the Wild seemed to have issues coping with Toronto’s superior team speed.  At times it almost resembled a shooting gallery as Wild forwards were all trying to fly out of the zone instead of making sure they re-established possession and this allowed Toronto to keep Minnesota hemmed in its own end.  Kevin Fiala would get a tripping penalty, which did nothing to improve Wild Head Coach Bruce Boudreau‘s already annoyed mood.  Toronto was pretty relaxed on the man advantage, as they moved the puck around the points as they let Morgan Reilly and Tyson Barrie tee up slap shots from the point.  Minnesota would get the kill but they still seemed to be chasing the game.  Toronto was just kind of toying with the Wild who seemed to be reacting and not anticipating just about anything the Maple Leafs were doing.  The Wild would take another penalty as Donato held up Tavares.  The penalty would prove costly as the Leafs moved the puck quickly, from high to low and then cross-ice as they set up Matthews for a quick shot that Dubnyk had no real chance on.  3-0 Toronto to cheers from the Maple Leafs fans who had traveled to see the team and boo’s from the annoyed home crowd.  The Wild seemed to get a little ornery after the Matthews goal as they tried to give the home crowd something to cheer about.  While Minnesota was able to open some lanes to shoot from, all too often the shots were missing high and wide and not even forcing Andersen to make a save.  Tavares would nearly add to Toronto’s lead as he ripped a shot that rang off the post and out.  Minnesota would counter with its first quality shots on goal in the period as a deflection by Mats Zuccarello gave Andersen a little trouble and then Ryan Suter pounce on a rebound that was steered away by the Danish-born goalie.  Minnesota would draw a power play as Greenway was held up by Travis Dermott.  The Wild would cash in on the power play as Koivu screened Andersen and Suter was able to send a wrist shot right by him.  3-1 Leafs and Toronto would call a timeout as they sensed a momentum shift in the game.

Andersen has no idea where the shot is, looking the wrong way when it goes by pic.twitter.com/wk2fk57VMV

Minnesota continued to apply pressure as Andersen had to be sharp to deny a quick shot by Victor Rask as the Wild were buzzing after the goal.  The Wild also juggled their lines a bit as they put Foligno on the 2nd line to have him his size and strength on the forecheck.  The pace would slow down a bit as the period went on, but the Wild would apply some offensive pressure the last minute hoping to cut the Maple Leafs’ lead to one.  Former Golden Gopher Justin Holl would send a shot on goal after a whistle that drew the ire of the Wild who shoved the young Maple Leafs defenseman as Toronto carried a 3-1 lead into the 2nd intermission.

3rd Period Thoughts:  The 3rd period started out with an anxious feeling in the arena as the Wild seemed to still appeared a bit disorganized, getting bunched up on the ice.  This gave the Maple Leafs easy opportunities to exit the zone and force the Wild to attack the full length of the ice.  Toronto thought they were going to add to its lead as Pierre Engvall set up Kapanen for a chance from the slot that Dubnyk knocked down and covered up.  Minnesota was activating its defense in search of another goal to cut the Toronto lead to one.  The Wild kept attacking, taking any chance to send shots on goal, hoping for a lucky bounce.  The Maple Leafs were still looking to take advantage of Minnesota’s aggressiveness and this made the Wild spend valuable time it didn’t have, defending its own end of the ice.  Devan Dubnyk had to be sharp as he knows he cannot afford to give up another goal.

Dubnyk with a big stop on Tavares. pic.twitter.com/tF3HAbyr8k

The Wild just didn’t seem to have the energy in their legs to win the races for loose pucks and the Maple Leafs were content to just lift the puck out of the zone and let Minnesota waste time tracking it down.  You couldn’t say Minnesota wasn’t trying as a long pass was bobbled by Martin Marincin and an alert Jared Spurgeon raced in on a partial breakaway but he was denied by Andersen.  Minnesota would pull Dubnyk with about 2:35 left to play but the Wild couldn’t really get set up and comfortable in the offensive zone until almost a minute left in the game.  The Wild set up a few shots from the point but that was as good as it got.  Tavares would bury an empty netter with 25 seconds left to seal a 4-1 victory over the Wild.

Thank you to all of our readers over the years.  Its hard to believe its been about 16 years since we started this adventure.  We hope your 2020 was even better than your 2019 was!

LW – Adam Beckman (Spokane, WHL) ~ the Saskatoon-native may have been left off Team Canada who might be regretting that decision as the skilled sharpshooter had a hat trick on 5 shots in the Chiefs’ 5-2 win over in-state arch rival Tri-City.  Beckman has 28 goals, 58 points, 8 PIM’s and is +27 in 34 games.

C – Matvey Guskov (London, OHL) ~ the versatile center may not be the biggest scorers but he has a tendency to score when his team loses games.  I’m not quite sure how to feel about that.  He had a goal on 4 shots and went 7 for 12 on his draws in London’s 7-2 loss to Kitchener on Saturday night.  On New Year’s Eve, the skilled center had 2 assists in London’s 4-2 win over Sarnia.  Guskov has 7 goals, 17 points, 31 PIM’s and is a ‘even’ rating in 35 games.

RW – Shawn Boudrias (Cape Breton, QMJHL) ~ the Terrebonne, Quebec-native had an assist on 6 shots in the Eagles’ 7-1 thrashing of Halifax on Saturday.  He would add another assist and 2 hits on Sunday in the Eagles 5-3 win over the Mooseheads.  Boudrias has 19 goals, 40 points, 44 PIM’s and is +16 in 33 games.