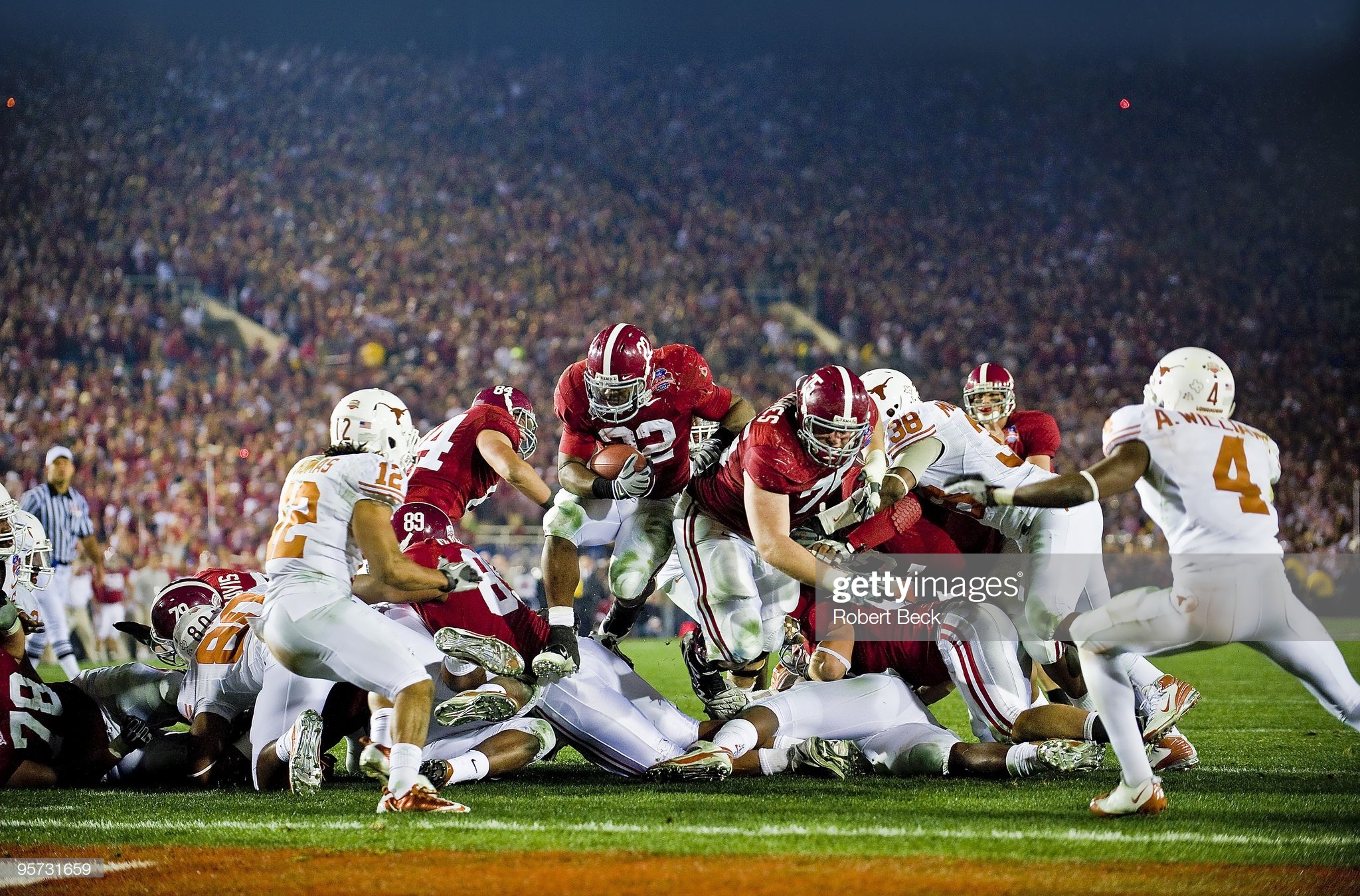 Despite not appearing in a major bowl for the first time in nearly a decade this past season, Alabama has become college football’s preeminent power under head coach Nick Saban. In 13 years in Tuscaloosa, Saban’s Crimson Tide have won five national championships and played for the national title on two other occasions.

This first national championship under Saban was won on this day 10 years ago.

13-0 teams met in Pasadena for the BCS National Championship on Jan. 7, 2010. No. 1 Alabama and No. 2 Texas had each had their shares of close calls throughout the year but each had arrived unblemished.

Led by head coach Mack Brown, the Longhorns were looking for a second national championship in five years. Under the third-year Saban, the Crimson Tide were looking for their first national title since 1992 and would get it with a 37-21 victory.

Texas raced to an early 6-0 lead with a pair of Hunter Lawrence field goals, but were largely unable to take advantage of stellar field position. The early advantage also came with a price.

After an interception from Blake Gideon on a fake punt pass attempt from Alabama punter P.J. Fitzgerald gave Texas the ball inside Alabama’s 40-yard-line, the Longhorns would lose quarterback Colt McCoy to injury after just one pass attempt. McCoy had finished third in the Heisman Trophy voting, but with a shoulder injury, Texas was forced to turn to freshman Garrett Gilbert.

Despite an injured McCoy, Texas faced 1st-and-goal from the 1 on its opening drive, but could not find the end zone. The Longhorns fooled Alabama with a successful onside kick immediately following the field goal, but again stalled and settled for a field goal.

Alabama managed just 11 total yards on its first two drives, but erupted in the second quarter with 24 points. Heisman Trophy winning running back Mark Ingram carried the ball five times on the next Alabama drive before finding the end zone from two yards out less than a minute into the second period.

After the Alabama defense forced a third straight 3-and-out for Texas, it took just two Trent Richardson runs for the Crimson Tide to find the end zone yet again, scoring on a 49-yard touchdown run. Down 14-6, the Longhorns would regain their composure and march inside the Alabama 30-yard-line, but Javier Arenas intercepted Gilbert’s pass to thwart a scoring opportunity.

Another 3-and-out by Texas led to a short field goal by Alabama’s Leigh Tiffin to make it a 2-score game late in the first half. Gilbert would end the half by making an unfathomable mistake.

With just seconds remaining and Texas inside its own 40-yard-line, Gilbert felt pressure as he tried to release a short pass. The ball bounced around and into the arms of Alabama defensive tackle Marcel Dareus, who went 28 yards for a touchdown as the half ended.

Alabama led 24-6 at the break, but Texas finally found the end zone late in the third quarter when Gilbert hit Jordan Shipley for a 44-yard touchdown connection. After Tiffin missed a long field goal with more than 11 minutes to play in the fourth quarter, Texas pulled to within three on another touchdown pass from Gilbert to Shipley — this one from 28 yards away — with more than six minutes remaining.

The Texas defense again stood tall and with more than three minutes to go, it took over from its own 7-yard-line, down, 24-21. As it had all year long, the Alabama defense made a play when it had to. On the second play of the drive, Gilbert was stripped on a sack by Eryk Anders and linebacker Courtney Upshaw fell on it at the 3-yard-line of Texas.

With three straight 1-yard runs, Ingram found the end zone with two minutes to go to cement the contest. Two of Gilbert’s next four passes would find the hands of Crimson Tide defenders — first by Areans and second by Tyrone King. With less than a minute to go, Richardson capped the scoring with his second rushing touchdown of the night.

Neither team finished with as much as 300 yards of offense, but the five Gilbert turnovers ultimately did in Texas. Ingram led all rushers with 116 yards, which was just ahead of teammate Richardson’s 109. Both scored twice. Quarterback Greg McElroy completed just six passes in the win.

Shipley spearheaded the Texas offense with 122 yards receiving on 10 catches and the team’s only two touchdowns. Arenas intercepted two passes for the Alabama defense.

For the first time in 17 years, Alabama was college football’s national champion. In the 12 years since, the Crimson Tide have won four more titles, but each time with one loss. The only perfect season of Saban’s legendary career was completed on this day a decade ago. 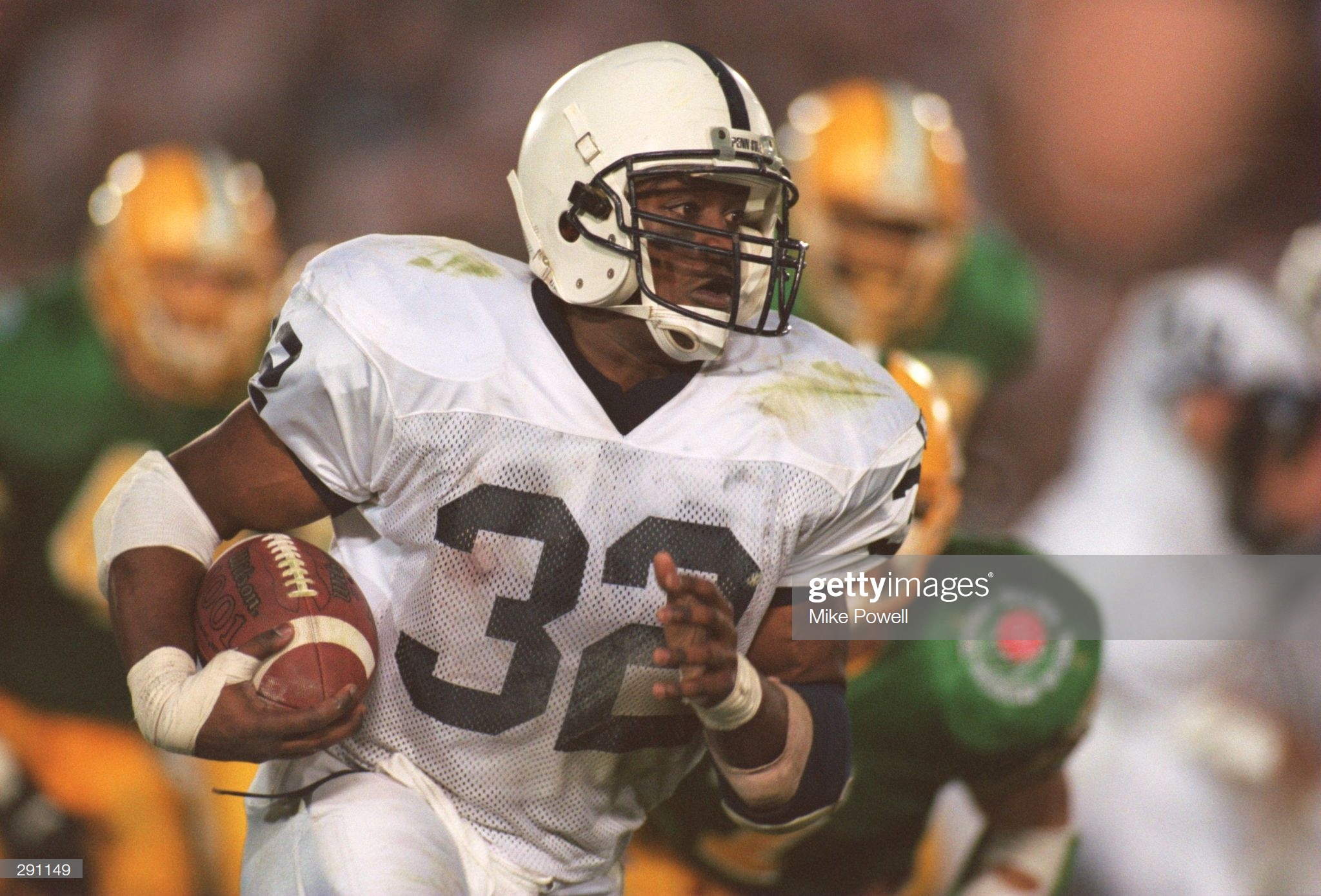