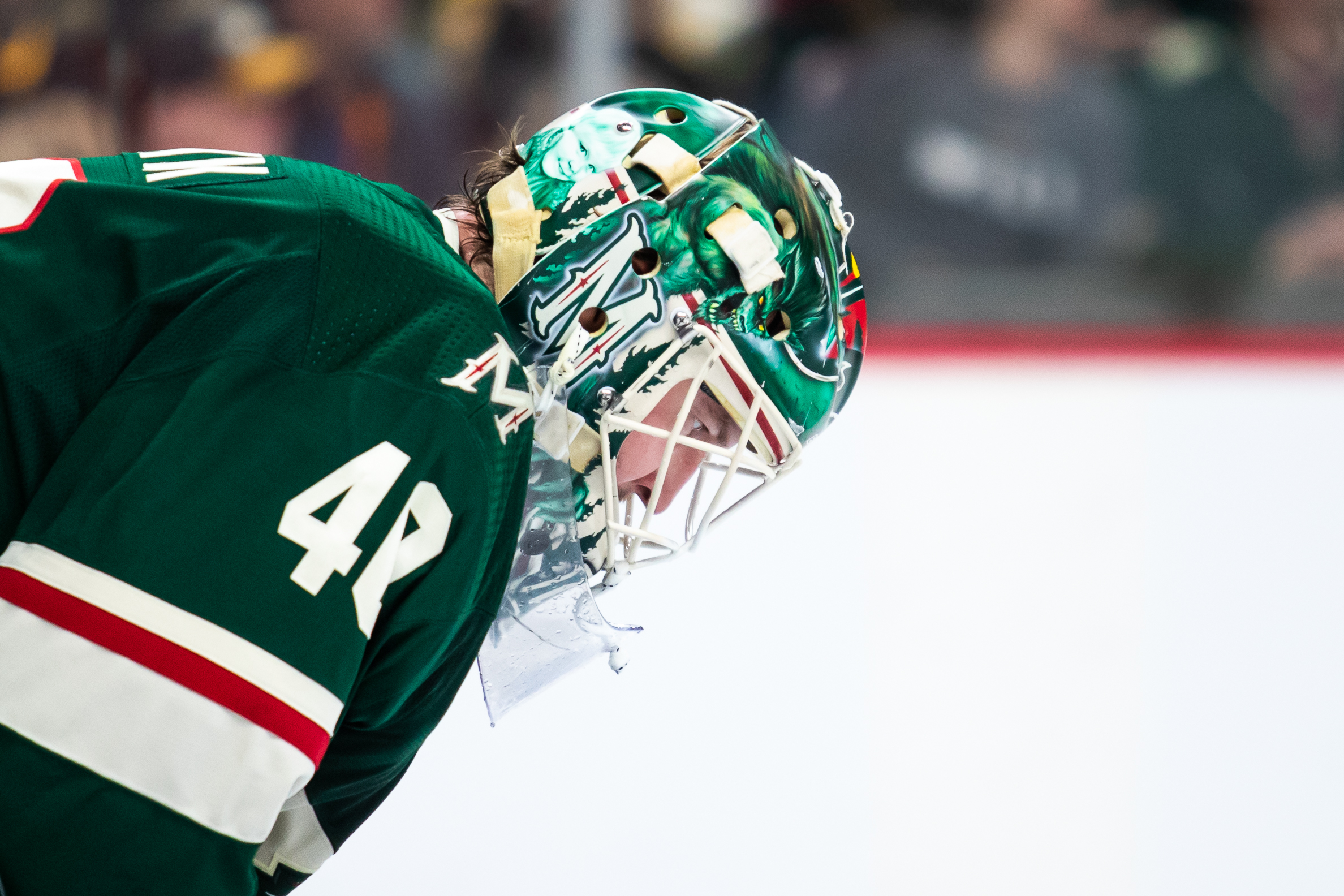 We hope you enjoyed the nice little respite that is NHL All Star week and toss in a league mandate furlough the Minnesota Wild nearly had two full weeks off without hockey.  I know I enjoyed the time away from it a little bit, even if I took it as a chance to just relax and watch some college hockey.  NHL’ers not invited to the NHL All Star Break likely flew off to sunny locales to get some much-needed rest and recovery.  But like any good vacation it goes by quickly and now they find themselves back at it with the grind towards the post-season (or the end of the season) in front of them.

The Boston Bruins have been one of the league’s best clubs this season, with a balance of size, toughness, speed and scoring that make them more than a handful.  With the league-mandated furlough the Wild had a few extra days off, but will that make them more well-rested and refreshed or will they be sluggish like a team that slept in too long?

1st Period Thoughts:  The Wild started the game with its 4th line of Jordan Greenway, Mikko Koivu and Ryan Hartman, but they’d get caught off guard by Boston’s 3rd line which worked the puck deep into the Minnesota end.  On the next shift, the Wild went to its 3rd line of Luke Kunin, Joel Eriksson Ek and Marcus Foligno who kept it simple by sending pucks on goal and hoping for a redirection.  Jaroslav Halak was fortunate as Foligno set up Kunin for a quick shot from the slot that he drove wide of the mark.  A few minutes later, the 3rd line again caused a spark offensively as Matt Dumba joined the rush and he let go a heavy wrist shot that hit the left post square and stayed out.  The Bruins’ energy line was giving the Wild some trouble with its speed and hustle as Chris Wagner made a power move towards the slot before letting go of a shot that was stopped by Devan Dubnyk.  The overall play was kind of sloppy as one would expect from two teams still looking rusty from the All Star Break and their bye.  Shots were hard to come by.  Esko, Minnesota-native Karson Kuhlman would race into the Wild zone and he’d lift a backhander that gave Dubnyk a little trouble.  The Wild’s legs appeared to be a bit heavy and Boston started to assert itself with its speed.  Peter Cehlarik would drive down the slot and drop a pass back to Torey Krug who moved in and beat Dubnyk with a backhander.  1-0 Boston.  The Wild could only muster a few feeble shots from the perimeter that Halak handled with relative ease.  Minnesota tried to crash the net in search of the equalizer but the Bruins’ defense did a decent job of tying up Wild forwards and not give them too much freedom near the blue paint.  The physical play began to manifest itself more frequently, both in battles for the puck along the wall and in finishing their checks.  The Wild’s 2nd line would finally cause some trouble as Eric Staal set up Greg Pateryn for a blast form the point that Halak stopped and Zach Parise pounced on the rebound that skittered wide of the goal but they did manage to draw a Bruins penalty in the sequence.  On the power play, the Wild moved the puck around effectively as they set up Jonas Brodin for a shot from the point that Halak fought to steer away at the last moment.  Minnesota didn’t do much with the rest of the power play as they struggled to work the puck out of their own end of the ice.  The Wild had to feel frustrated and annoyed being down 1-0 for what was a pretty sloppy opening period.

2nd Period Thoughts:  Minnesota hit 3 posts in the first few minutes of the 2nd period as the mantra was clearly shoot early and shoot often.  Yet, a penalty by Hartman would prove costly as the Bruins would extend their lead on the power play as Jake DeBrusk would one-time a blast that went off the post and off the back of Dubnyk and in.  2-0 Bruins.  Minnesota would send a puck into the stands for a slashing call on Staal and the Bruins sensed an opportunity to bury the Wild.  They wasted little time setting up Brad Marchand rip a shot by Dubnyk.  3-0 Bruins.  The Wild recognized they needed to answer back, but bad passes and poor decisions thwarted rushes even before they had a chance to set up a shot on goal.  Minnesota’s frustration level continued to manifest itself in pointless scrums after the whistle when in reality the Bruins were executing much better than the Wild and were hustling more on a shift-by-shift basis.  Dumba would exchange shoves with Marchand after the whistle in what was mostly a fruitless exchange.  I don’t get it.  Marchand has already scored a goal, we’re down 3-0 and now you’re going to try to goad Marchand?!  That makes ZERO sense to me.  The Wild would draw a holding penalty on Charlie McAvoy as he hauled down Mats Zuccarello.  Jared Spurgeon would take a shot off the rush where he tried to beat Halak short side but the Bruins’ goalie would deflect the puck up and out of play.  The power play accomplished absolutely nothing as Mikko Koivu would take a roughing penalty and Brad Marchand was called for holding and both ended up in the box.  Koivu chirped at Marchand as he headed to the sin bin.  The Wild’s effort looked pretty indifferent and disinterested as they had almost 40 seconds of power play time still to work with.  The Wild’s lack of discipline continued as Joel Eriksson Ek hauled down a Bruins player for an obvious penalty.  The Bruins were patient and careful with the man advantage and like novacaine, it would work once again.  Dubnyk was unable to make control the rebound, as DeBrusk hacked at the puck and David Pastrnak swept it into the yawning net.  4-0 Bruins.  The Wild fans in attendance gave an apathetic groan and probably went back to venting on their phones.  DeBrusk would get called for cross-checking giving the Wild a late period power play.  Minnesota struggled to move the puck around the offensive zone and Boston wasn’t having to work too hard to disrupt the Wild’s power play.  Beyond a few shots from the point, the Wild didn’t do anything that remotely threatened Boston on the man advantage and they’d go into the 2nd intermission down by four.

3rd Period Thoughts:  The 3rd period was mostly the Wild going through the motions of a professional hockey game.  Little hustle, just more poor execution in the offensive zone and more proof of how inept this Wild squad is.  The Bruins were doing nothing other than just trying to keep themselves between the Wild skaters and their goaltender and it was more than enough to thwart most of Minnesota’s efforts at creating a scoring chance.  It wasn’t pretty to watch and while there were a few close attempts, at the critical moment the Wild couldn’t pull the trigger.  Zdeno Chara would trip up Victor Rask, and the Wild would go on the power play where Boston was able to create more quality scoring chances shorthanded than the Minnesota was with the power play.  Even with one Boston penalty killer without a stick, the Wild couldn’t really challenge Halak with a difficult save and the Bruins would kill another penalty.  By this point the Bruins were just clowning with the Minnesota Wild, playing keep away and drawing penalties as Brodin reached at Patrice Bergeron.  The Bruins were playing careful and not taking any foolish risks and didn’t really try to send any pucks on goal and the Wild would get a kill simply because Boston didn’t care to force the issue.  The Wild would spoil the shutout as Zuccarello spun and fired a shot that beat Halak high.  4-1 Bruins.  The Bruins would raise their level of play and just pin the puck against the boards to kill time.  Boston would add one more goal late as a lost board battle resulted in Anders Bjork moving into the slot and firing a shot by Dubnyk like he wasn’t even there.  5-1 Bruins.  The pain continued as the Wild were caught standing still as a cross-ice pass made it to DeBrusk who rifled a shot by Dubnyk who angrily broke his stick on his goal cage.  6-1 Bruins as the Wild finished the game to mostly apathetic silence.  That is the sound of complete failure.

LW – Adam Beckman (Spokane, WHL) ~ the sniping winger had a quiet night on Wednesday with a lone assist on 2 shots in the Chiefs’ 4-2 loss to Kamloops.  He made up for his quiet night with a notable effort on Friday where he had a goal and 3 helpers on 3 shots in Spokane’s 7-3 win over Kelowna earning 1st star honors in the process.  Beckman has 35 goals, 76 points, 12 PIM’s and is a +28 in 47 games.

F – Nikita Nesterenko (Chilliwack, BCHL) ~ the Brooklyn, New York-native had a huge night on Wednesday as he earned 1st star honors with a goal and 3 assists in Chilliwack’s 6-4 win over Merritt.  The Boston College-commit has 17 goals, 48 points, 23 PIM’s in 45 games.

LW – Nick Swaney (Minnesota-Duluth, NCHC) ~ the junior winger is starting to catch fire offensively as he had a power play goal on 7 shots in the Bulldogs’ 3-2 win over Denver.  Swaney has 9 goals, 20 points, 2 PIM’s and is a +2 in 22 games.

LW – Vladislav Firstov (UConn, H-East) ~ the talented winger is having a terrific freshman season as he had a goal and 3 helpers in the Huskies’ 7-4 win over New Hampshire.  Firstov leads the Huskies’ in scoring with 10 goals, 20 points, 25 PIM’s and is a +13 in 26 games.

Minnesota High School Hockey Report:  The High School hockey seasons are grinding through the last few weeks of the regular season schedule as they ready themselves for the section playoffs.  Here are the latest Top 10 rankings for both Girls and Boys hockey in Class A & AA respectively as of January 29th, 2020 according to Let’s Play Hockey.