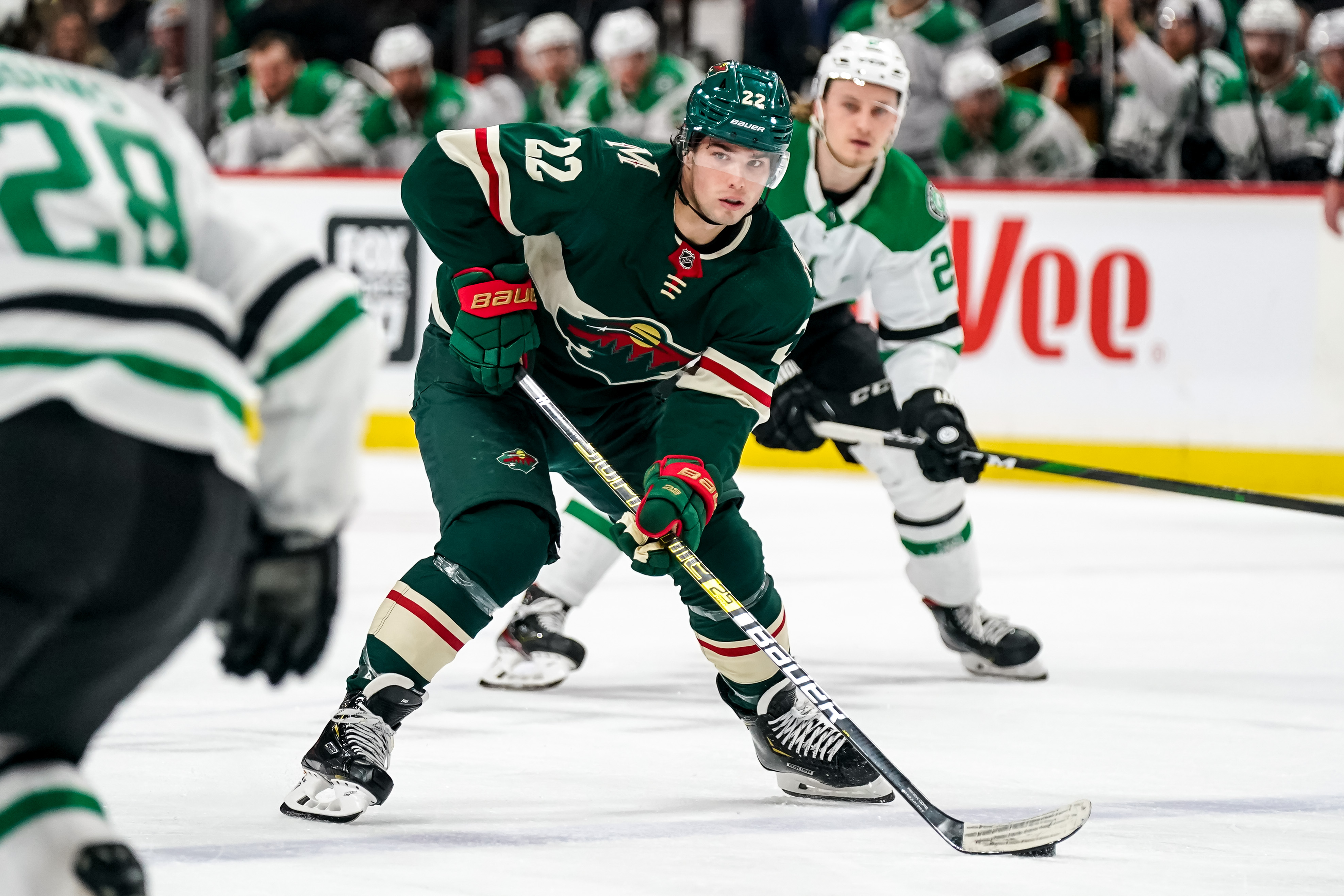 One of the basic realities of life in professional sports is the quick turn around and in some sports like the NHL its the back-to-back.  So you earn a win on home ice and then you’re gathering up your gear to board a red-eye flight to play the next night.  I don’t doubt that’s an easy thing to do but for the Minnesota Wild they’ll have to find a way to make the best of it if they want to keep their positive momentum going after two wins in a row.

The Dallas Stars seemed to have found their game since they let go of Jim Montgomery as head coach.  Dallas plays stingy defensively but the Wild embarrassed the Stars the last time the two teams played as part of Hockey Day Minnesota.  Can the Wild earn a big road win over Dallas tonight?

1st Period Thoughts:  The Wild started the game with Eric Staal, Mats Zuccarello and Zach Parise and the old legs struggled from the drop of the puck against Dallas who clearly wanted to push the tempo early.  The Stars would build some momentum as the Wild found themselves scrambling in their own end as Mattias Janmark was denied by a save by Devan Dubnyk on a chance from the slot.  The top line of Luke Kunin, Ryan Donato and Kevin Fiala would create a little havoc as Donato forced a turnover in the Dallas zone which led to a point shot by Greg Pateryn that was blocked.  As Minnesota tried to scramble after the puck and Luke Kunin hauled down Blake Comeau to give Dallas the first power play of the game.  Dubnyk had to make two quick saves to start the penalty kill, but Minnesota’s penalty killers would do a reasonable job of working sticks and bodies into shooting lanes and then being able to clear the zone.  As the Stars’ power play expired the Wild counter attacked off the rush and it was Parise finding a trailing Ryan Suter for a wrist shot that Ben Bishop struggled a bit as he made a leg pad save.  The Stars were screening Dubnyk with regularity but to his credit, he was seeing the puck well through traffic.  A few minutes later, the Wild had a great chance as a long pass off the back wall was tracked down by Jordan Greenway who fired a shot on goal that was knocked down and covered up by Bishop.  The 3rd line of Greenway, Marcus Foligno and Joel Eriksson Ek caused some havoc with some strong play on the puck in Dallas’ end of the ice, as they peppered Bishop with shots.

Devan Dubnyk with a massive save on Radulov. pic.twitter.com/nPaoasK3JW

The Stars’ were swarming over the Minnesota end and Dubnyk had to fight off as he denied Denis Gurianov.  Jared Spurgeon would get caught hooking at the end of the play giving Dallas its 2nd power play of the game.  The Stars wasted little time on the power play; which actually was a delayed penalty as Tyler Seguin sent a shot on goal that deflected off a Wild defender and then was pounced on by Plover, Wisconsin’s Joe Pavelski for a goal.  1-0 Dallas and to compound the error, Jonas Brodin was tagged with double-minor for high sticking Alexander Radulov.  Wild Head Coach Bruce Boudreau was incensed as he felt Radulov’s injury wasn’t the result of a high stick but it didn’t matter as Dallas stayed on the power play.

I'm not an expert in lip-reading or body language, but I'm going to speculate that Bruce wasn't happy with the double-minor on Brodin. @mnwild @fsnorth pic.twitter.com/FqmVbqeyTY

Minnesota’s penalty killers  would get a little help early into the 4-minute power play as Parise was tripped up which made it 4-on-4 for the next two minutes.  The Wild was content to challenge the Stars as they tried to generate speed through the neutral zone instead of taking too many chances offensively.  Minnesota’s penalty kill was relatively effectively at denying Dallas from having much in the way of time and space and they’d probably breathe a small smile of relief to only be down 1-0 after 1.

2nd Period Thoughts:  A big part of sports is staying focused on the simple goal.  Situational awareness is a big part of this.  At times during the 2nd period the Wild demonstrated great awareness and at others it really makes you wonder what’s going on between the ears of some of the Minnesota players.  Let’s start with the ‘makes you wonder’ part, as the Wild are on the penalty kill and actually doing a pretty decent job of neutralizing the Stars power play but then Ryan Hartman decides to do his own thing.  Hartman, instead of staying focused on the task at hand which is killing the penalty decides to challenge Corey Perry to a fight.  The veteran winger, pretends to be interested at first but then decides to keep playing hockey which allowed Dallas to leave their own zone with ease.  As Perry joins the play he skates down towards the slot and bringing Hartman with him and Minnesota’s penalty kill loses some of their defensive coverage at the point.  Because of the lack of coverage, the Stars are able to move the puck without any trouble and they feed a pass to Denis Gurianov who one-times a blast by Dubnyk.  2-0 Dallas.  Tough to put much blame on Dubnyk for when one of his penalty killers loses his focus like that.  Fortunately for the Wild, Minnesota would re-focus offensively and it all started with hard work.  A good forecheck and just working pucks on goal.  Joel Eriksson Ek would tuck in a shot just inside the right post to cut the Dallas lead in half.  The Wild continued to keep it simple and not worry about being pretty but doing the simple things that usually end up rewarding you on the scoresheet.  Ryan Donato who had been hustling well all game long, he would swing a shot from the boards that caught Bishop by surprise tying the game at 2-2.  It was a soft goal given up by Bishop, but if Donato doesn’t hustle it doesn’t happen.  The Wild were showing a little fire and as the period concluded, Greenway would wrestle Perry to the ice looking like a bear mauling a rag doll.  I know Perry is a dirty player, but clearly he’s on the Wild’s shit list for some reason.  2-2 after 2, anyone’s game now.

3rd Period Thoughts:  After the matching minors to Perry and Greenway, the 3rd period would start with 4-on-4 hockey.  The open ice was to the benefit of Dallas who seemed to have more team speed to exploit the extra space on the ice.  You could sense the anxiety in the home crowd and on each team’s bench as every shot was being frozen by the goalies as no one wanted to make the mistake to tip the balance of the game.  Donato was continuing to be pesky around the puck as he tried setting up Kunin for a chance that just failed to connect but he seemed to be creating chances whenever he was on the ice.  The action was fast and end to end, but somewhat cautious as both teams were backchecking and not giving up much in the way of 2nd chance opportunities.  It was all a matter of who was going to battle a bit harder at the right moment.  Devan Dubnyk would come up with a beautiful post-to-post save on a late Dallas power play was a turning point.  The Wild waited for that chance, and with a minute left after Eriksson Ek was thrown out of the faceoff circle.  Foligno would win the draw and then after a 20-second battle along the wall for the puck, Greenway would come away with the biscuit where he was denied on a wrap around bid but Minnesota held the zone and it was Brodin sending a shot on goal that was partially deflected.  Eriksson Ek would gather up the loose puck and tuck it inside the left post to give Minnesota a 3-2 lead with 27 seconds left.  Minnesota would hold on the final 27 seconds to earn a huge regulation win over Dallas.

~ Attendance was 18,532 at American Airlines Arena.

~ Zach Parise played in his 1,000th NHL game tonight.  Crease And Assist: A Legally Compliant Hockey Blog congratulates him on this accomplishment.

Minnesota High School Hockey Report:  As the girls teams around the state begin the opening round of section playoffs, the boys are getting close to the end of their regular season.  Here are the Top 10 rankings as of February 6th, 2020 according to Let’s Play Hockey for both Girls and Boys Hockey in Class A and Class AA respectively.