Hockey Day Minnesota has steadily become ‘must-watch’ TV for any fan of hockey in Minnesota since it’s creation back in 2007 when it debuted along the Canadian border in Baudette, Minnesota.  Playing outdoor hockey with the neighborhood kids in frigid temperatures was an experience shared by many as an almost rite of passage of growing up.  Lacing up your skates in the warming house, the puffs of steam out of noses and mouths as you tried to catch the attention of others hoping they’d pass you the puck and its ‘knock’ as it careened off the frozen boards and the sounds of the skates tearing through the ice is just timeless.

When the decision was made to raise the profile of this experience with Hockey Day Minnesota it was a chance to showcase communities and local hockey programs and the love for the game all across the state.  Whether it was playing near the lift bridge in Duluth or Stillwater, or on Lake Pokegama in Grand Rapids or Holman Field in St. Paul or in Handke Pit in my hometown of Elk River it was a chance to show off your hockey heritage.  Local hockey associations, school districts and small city governments would work together to host an event that would bring thousands of people to their community and the featured outdoor games (at least at first) were the ones that involved high school teams.  It didn’t seem to matter whether your program was considered a powerhouse or not.

Lake of the Woods High School and St. Paul Johnson battled it out in that first game back in 2007.  No one cared that it wasn’t some high profile game of highly ranked HS hockey programs.  As the event became an annual tradition, the event usually would invite one powerhouse match up to be a part of the festivities but no matter what the local high school programs were a part of the telecast.  At least until 2022 as the Minnesota Wild announced the broadcast lineup for this year’s event being held in Mankato at Blakeslee Field. 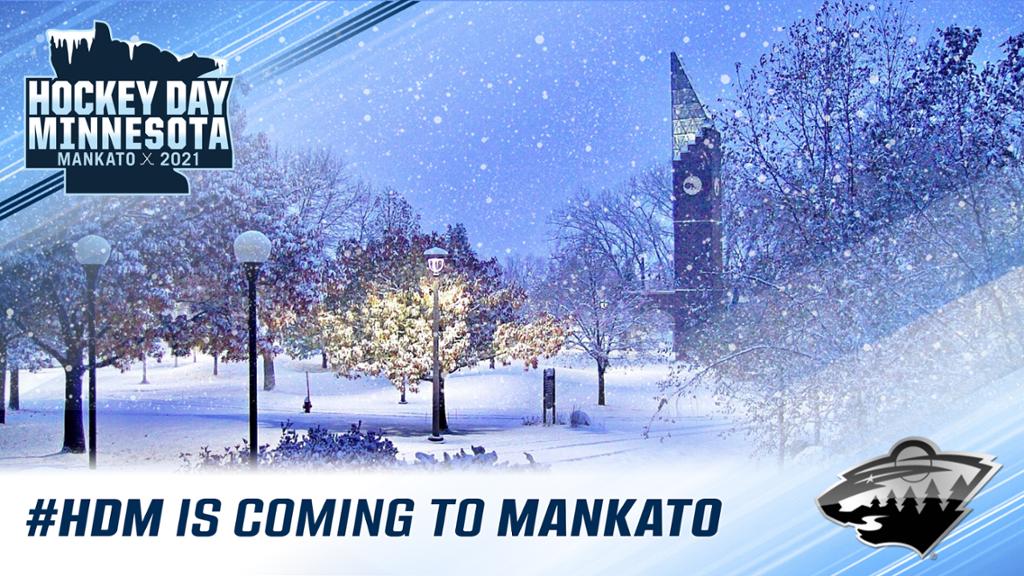 The pandemic caused the event to be postponed last year, so Mankato had another year to plan and prepare.  So you can imagine the sting it must have been to see that both the Mankato East vs. Mankato West games between both the boys and girls teams were not going to be televised.  Yet a powerhouse match up between defending state champion Edina versus defending runner up Andover (in Girls Class AA hockey) as well as the Boys Hockey showdown between Prior Lake and East Grand Forks will be televised. 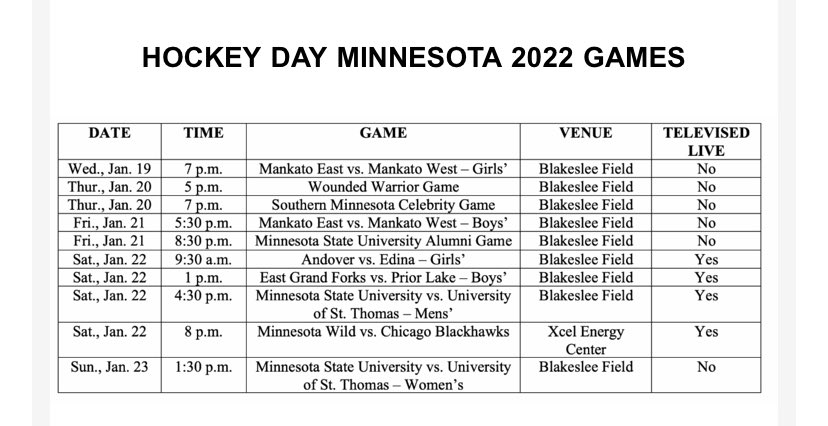 So if Mankato East / Mankato West players want to be a part of the festivities on Saturday January 22nd which is when Hockey Day Minnesota is being broadcast, they will have to do so as spectators.

The Mankato hockey program, their school district and city put the effort in to host this event.  They’re the one putting in the time, energy not to mention their heart and soul for this celebration.  Why are their local HS teams not featured in the broadcast?  When Elk River hosted the event in 2014, the boys program was one of the better programs in the state and they had a spirited game against an up-and-coming Stillwater team.

Yet in the past it hasn’t mattered if your team was a powerhouse program or not.  In 2019, the Minneapolis HS program played against Warroad when the event was being held in Minneapolis.  In 2018, the combined HS team of St. Cloud Tech / Apollo faced off against in-town arch rival St. Cloud Cathedral.  In fact, until this year’s event the broadcast always televised at least one game with one of the local boys or girls High School teams of the respective community hosting the event.  Why are the programs of Mankato East and Mankato West not being given that chance to showcase themselves?

Was it Bally Sports or was it the Minnesota Wild that decided a cross-town match up would be less of a draw for viewers than watching a rematch of the Girls Class AA state title game?  If so, that’s wrong.  Imagine being one of the hundreds of local volunteers, people probably involved in the Mankato youth hockey program only to have your HS teams shelved in favor of some surburban teams from the Twin Cities?  Ouch.

I realize that they will still be playing games featuring Minnesota State-Mankato and the newly minted division 1 program of the University of St. Thomas.  I am not implying that is wrong or that they shouldn’t be a part of this event.  It makes sense and it is a great way to introduce St. Thomas as the state’s newest Division 1 hockey program.  No doubt it will help promote the program no matter what the score will end up being in the game itself.  Perhaps the fact it was Minnesota State-Mankato officials accepting the Minnesota Wild jersey in the video should’ve clued locals to their programs being snubbed.  Shouldn’t the local hockey program get the same chance to promote itself in this event by having one of its games as part of the telecast?

I get that in this day and age people get agitated when talking about a feeling of entitlement.  But if the Mankato Youth hockey program and its small army of volunteers are putting in the time, energy and sweat equity to make this event happen shouldn’t their local high school programs (boys or girls or both) be a part of the feature?  Isn’t that only fair for their collective effort?

Every other local program that has hosted an event has received this basic courtesy.  Its a chance for these local programs to raise their profile around the state, but to their own communities as well.  Afterall, to those young kids playing hockey in Mankato, the high school players are like their local heroes.  Shouldn’t they get the chance to be on the big stage?  I realize that isn’t why the players of these respective HS programs are playing the game and that they will still have a very intense cross-town game earlier in the week, but I think the efforts of the community deserve more than just a few seconds of highlights during the intermission of their TV broadcast.

There is still time to re-schedule this so that either the Mankato / West boys or girls game could be a part of Saturday’s telecast.  Yet for whatever reason I doubt they will make that change, and that should serve as a bit of a warning to other communities and local hockey programs that were considering to throw their hat into the ring to put on this event.

I understand that having a game between two powerhouse programs might make it more interesting to some viewers, but that’s not what this event is all about.  If you want that sort event, its called the Minnesota State High School hockey tournament.  This one is about celebrating Minnesota’s proud local hockey tradition around the state, not just the ones that sit near the top of the Let’s Play Hockey rankings year after year.

Should Mankato East / Mankato West have have at least one (if not both) of their games televised as part of Hockey Day Minnesota festivities?  Tell us what you think on Twitter at @CreaseAndAssist.