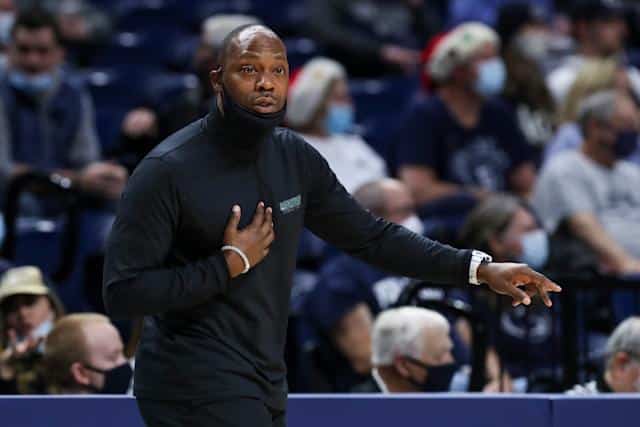 After their magical Elite Eight run and head coach Shaheen Holloway going back to his alma mater, Seton Hall, the Saint Peter’s Peacocks have finally found their new head coach.

A two-week National search for the next head coach is finally done for the Peacocks as Jersey City native Bashir Mason will be at the helm for Saint Peter’s.

Mason has been the coach of Wagner for the past 10 seasons. In those 10 seasons, he might not have found as much success as St. Peters was able to find throughout the March Madness Tournament, but he still did a great job helping a Wagner team that has similar talent to what the Peacocks’ have.

One thing that is going to be interesting is if Mason can get some of St. Peter’s key transfers back. Doug Edert has already announced his transfer to Bryant, but the Peacock still have Daryl Banks, Matthew Lee, and the Drame brothers in the transfer portal.

If Mason can find a way to keep these kids in Jersey City, Saint Peter’s could have a chance of winning the MAAC once again. As we saw this year, if you find a way to get into the March Madness Tournament, anything can happen.

Mason, who is 38 years old, played with Bob Hurley at Saint Anthony’s, coached with Dan Hurley at St. Benedict’s Prep in Newark, and later played his college career at Drexel.

In his career at Wagner, he led the Seahawks to three Northeast Conference regular-season titles and three second-place finishes. His overall record at Wagner was 165-130.

Mason is someone who is highly regarded in the New Jersey/New York area. If he can find a way to keep some of the top players in New Jersey and New York in-state, the Peacocks will find plenty of success.