During his ‘Real Kyper at Noon’ podcast from earlier today, former Sportsnet panelists Nick Kypreos and Doug MacLean touched upon some issues that the Ottawa Senators may be experiencing right now.

Although the discussion started by discussing the Senators’ nine-game losing streak, some meatier discussion points started at around the 25:35 mark of the episode.

Here’s a transcript of what was said:

DM: “You’ve got Stepan, who’s a problem. I mean, right now, whether it’s a family situation… who knows what it is.”

The Senators felt it necessary to trade a 2021 second-round pick to the Arizona Coyotes for Stepan back on December 27, 2020. Pressed up against the cap ceiling, Stepan was a cap casualty for the Coyotes who checked some boxes for Pierre Dorion and his scouts. Believing their young centres needed a veteran who could insulate their minutes and ideally mentor Tim Stützle, the Senators made an aggressive play to acquire the 30-year old.

That the veteran centre only had one-year remaining on a deal that carried a cap hit of $6.5 million did not matter. Thanks to a $3.0 million signing bonus that the Coyotes already paid out, the Senators were only responsible for the $2.0 million in real money that was owed to Stepan.

After scoring a goal in the team’s home opener against the Maple Leafs, Stepan has added only two assists since. Over the last nine games, he has seen his role reduced as D.J. has deservingly transitioned the top two centre roles to Josh Norris and Colin White.

On the surface, Stepan’s isolated impact on the Senators has not been terrible per Hockeyviz.com‘s visuals. 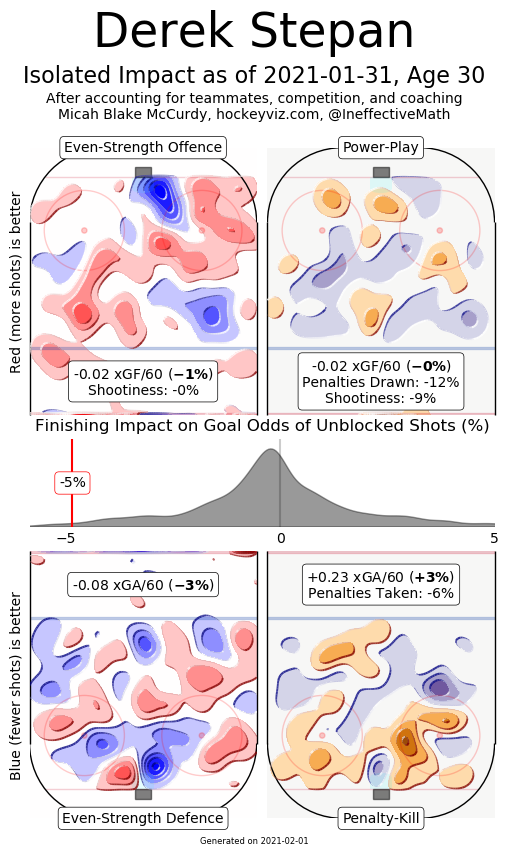 Although he has had an average impact in the offensive zone through the first 10 games, he has created a positive isolated impact in the defensive zone. It is obviously a small sample size, but it gels with his historical norms.

Looking a little deeper into Stepan’s five-on-five numbers, it is not shocking to learn that he has had the most success this season when he is sharing the ice with players like Brady Tkachuk, Drake Batherson and Thomas Chabot. This should not come as a surprise because Tkachuk and Chabot are best at their position (read: on this roster) at driving the team’s shot and goal share metrics.

If we are to believe that Stepan wants a change of scenery, it would be hard to fault the player.

As I mentioned earlier, Stepan’s in the last year of his deal and he’s probably looking for an opportunity to play a more offensive role to boost his production and cash-in on what may ultimately represent his last chance for a good contract in free agency. At the same time, Stepan arrived at Ottawa’s training camp later than others because he was at home welcoming the birth of his third child. Thanks to the Covid restrictions and isolation, it has to be difficult to be separated from his family at this moment.

Doug MacLean highlighted some of these points during the discussion, but also reflected on the player’s relationship with head coach D.J. Smith.

DM: “The question would be, is he pushing that? Is Stepan saying, ‘Look, this isn’t working.’ D.J. doesn’t really like him. I’m not convinced he likes D.J.. The question is, is he pushing (the trade request) as well? His family is in Arizona (with) three young kids, newborn, quarantine issues, visiting… maybe it’s just too much.”

Furthermore, if it is true that a renowned veteran like Stepan, who was targeted in a trade for his intangibles and leadership, cannot see eye-to-eye with his head coach, what kind of trickle effect does create with so many impressionable young kids on the roster?

What is clear is that the honeymoon phase of the D.J. Smith hiring has passed in Ottawa. We have already seen a transition this year where lineup decisions and usage patterns are heavily being scrutinized. If it is revealed that Stepan or other players aren’t particularly fond of the head coach, that adds another dynamic to the team’s slow start.

Despite all the obvious concerns involved in moving a valued asset to acquire a veteran centre whose production had dipped in Arizona and looked to already be in the diminishing returns phase of his career, it was always understood that the Senators believed that they would be able to dump Stepan closer to this year’s trade deadline and recoup a pick.

It was inefficient asset management then and if Stepan’s really pushing for a trade now, I can’t envision the Senators getting anything remotely close to the value that they moved out for him in December. If anything, it is only going to magnify the decision-making of general manager Pierre Dorion and his scouting staff. And for a group that has really come under fire in recent weeks from fans who have grown exasperated with its pro personnel decisions and acquisitions, they need to outright win some hockey deals to placate the fan base’s frustrations.

The next hockey deal management makes is going to come with a lot of scrutiny and if it involves moving Stepan, I just don’t know how the Senators can win that deal. 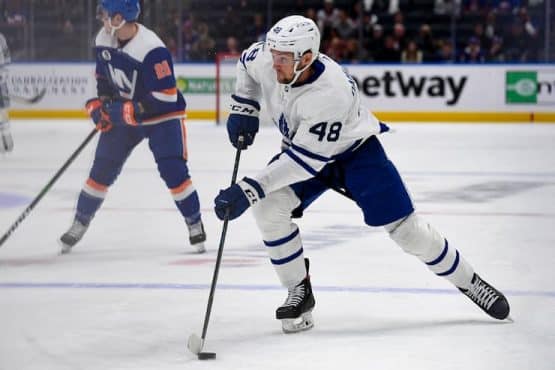