No Guarantees for the Charlotte Hornets 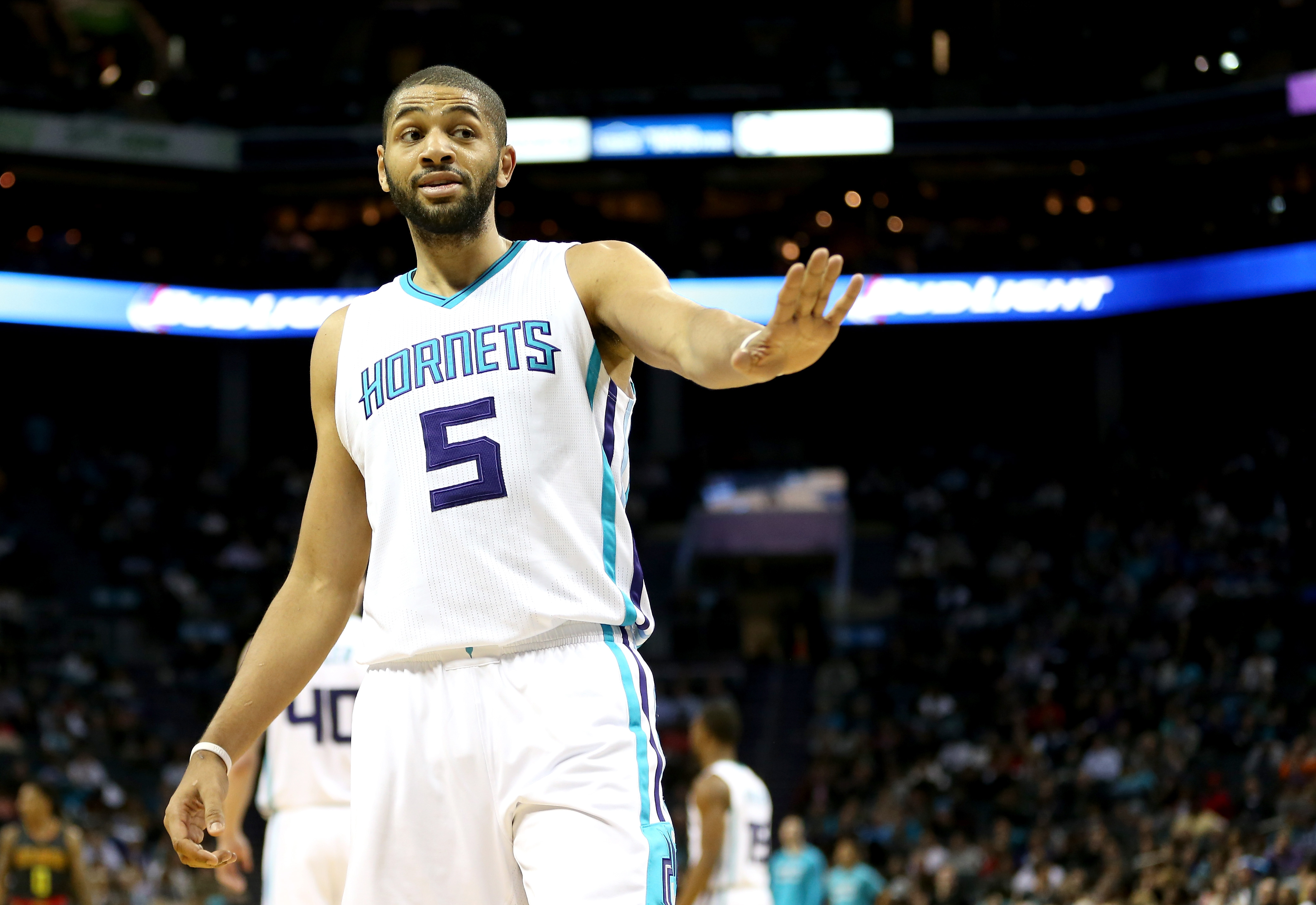 No Guarantees for the Charlotte Hornets

Losers in 10 of the last 11 games and lost without Cody Zeller, what’s going on with the Charlotte Hornets?

Charlotte is 2-14 this season when Cody Zeller sits, and the All-Star break can’t come sooner for the Hornets. Zeller aggravated his quadriceps injury last Thursday against the Rockets, and another loss versus the Toronto Raptors on Wednesday would bring Buzz City to 24-32.

How did a team that won 48 games and tied for the third-best record in the East during 2015-16 fall apart so fast?

Well, replacing Jeremy Lin and Courtney Lee with Ramon Sessions and Marco Belinelli probably didn’t help – though Lin has unfortunately been sidelined for almost the entire year and Belinelli hasn’t been bad. Kemba Walker is freezing cold in February (prior to Monday night). Marvin Williams is shooting a career-low 41 percent from the field. Michael Kidd-Gilchrist can’t throw a rock in the ocean. Frank Kaminsky is an inconsistent and inefficient sophomore. And Nic Batum’s defensive demise continues.

The conclusion from The Ringer’s Jonathan Tjarks’ early-season piece looks pretty spot-on at this point.

“Clifford has done an excellent job of building a system around the limitations of his best players, but it’s a very delicate balance, with each member of the starting five covering for the holes in the games of their teammates. Pull one thread and the entire thing collapses.”

Zeller may never become anything more than a very solid role player in the NBA, but he’s obviously vital in Charlotte. While their 22-18 record with a healthy Cody would still put them on pace for several fewer wins than they enjoyed in 2015-16, his injury has been the most glaring issue. In 506 minutes, the regular starting five (Walker, Batum, MKG, Williams, Zeller) boasts an Offensive Rating of 111.1 and a Defensive Rating of 102.9, per nbawowy.

To no surprise, the five-man lineup of Walker, Batum, MKG, Williams, and Kaminsky is better offensively (115.2) but worse defensively (109.1) through 85 minutes. In essence, they’ve gone from being a middle-class version of the Golden State Warriors to being a poor man’s version of the Dallas Mavericks, with Kaminsky doing his best (but failing) to impersonate Dirk Nowitzki.

Given that coach Steve Clifford’s specialty and preference is defense, it’s surprising to me that Kaminsky is operating at center. Miles Plumlee was a solid addition via trade and could be a decent option at center in the future since he is much more mobile and capable defensively than former Hornets Spencer Hawes and Roy Hibbert. Sure enough, Plumlee left Monday’s matchup with a calf strain and has already been ruled out for Wednesday, so Kaminsky might be asked hold down the fort against Jonas Valanciunas and Serge Ibaka unless Mike Tobey or Christian Wood is called upon. Gulp.

Hopefully the Hornets will welcome Zeller back for good after the All-Star break. However, there’s one lineup I’m surprised that we haven’t seen from Clifford during Cody’s absence – namely Walker, Jeremy Lamb, Batum, Williams, and MKG – which has played a grand total of ONE possession in 2016-17, per nbawowy. Shifting MKG to center in place of Kaminsky and starting Lamb at the wing would be an interesting experiment that could help strengthen the defense without sacrificing on offense. Kaminsky is one of a handful of players whose wingspan (6-11) is actually shorter than he stands in shoes (7-0.75) while Michael measures in at 6-7.5 with a 7-0 wingspan (both via DraftExpress.com). Having MKG cover centers on defense keeps him closer to the rim, and he is a MUCH better rim-protector than Kaminsky. To his credit, Frank matched his career high in rebounding and blocked shots on Monday, but it’s tough to imagine him having more success patrolling the paint than a proven stopper like Kidd-Gilchrist. Furthermore, Kaminsky might feel more comfortable off the bench as a featured offensive option primarily facing reserves, and Lamb’s putrid three-point percentage might benefit from the higher-quality looks he’d surely see as a starter. The current splits back up the former, but not the latter, though of course we’re dealing with small sample sizes. MKG could also find himself being more involved in the offense as a rim-runner in the pick-and-roll game with the first unit.

In this sequence, MKG is matched up with Dario Šarić, quite arguably the second-best rookie in the class, a grinder with great vision who’s worth getting to know if you’re not already familiar. That brings MKG out to the perimeter more than it would if he were covering Nerlens Noel, or in this case, Richaun Holmes, and the result is evident. Perhaps knowing that the 76ers are set to attack Kaminsky in the paint via the pick-and-roll with Holmes diving hard, Batum keeps himself planted on the interior instead of sticking with Robert Covington. Meanwhile, MKG is left chasing Nik Stauskas around at the top of the key on a switch.

The truth is that if Zeller is ready to rejoin the rotation immediately after the break and stays healthy for the final 25 games, the Hornets will probably turn things around and sneak into the Eastern Conference playoffs. After all, they are only two games behind the seventh-seeded Chicago Bulls and 1.5 back of the eighth-seed Detroit Pistons. But as Charlotte learned on Monday night against Philadelphia, there are no guarantees in this basketball business. Zeller could return only to re-aggravate the same injury or suffer a different ailment altogether, and the Hornets could run out of honey before winter is over.