Dennis Smith: Dallas's Newest Maverick is Their X-Factor This Season 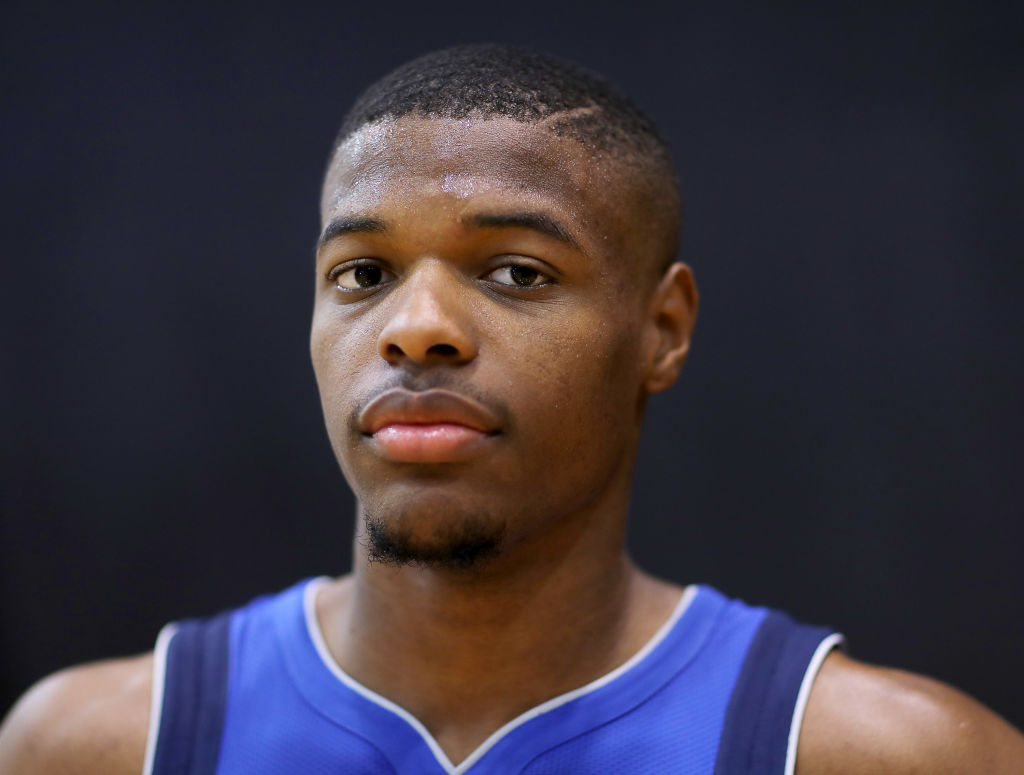 Dennis Smith: Dallas's Newest Maverick is Their X-Factor This Season

For two decades Dirk Nowitzki has been both the Mavericks X-Factor and the sheriff in town. This season, a kid out of North Carolina who can do this and this will be Dallas’s X-Factor. Besides bringing high-flying pyrotechnic entertainment to the arena, Smith will be the primary playmaker in the offense. The Mavericks now have their first starting PG with superstar potential to nurture and develop since Steve Nash.

For a franchise that has not drafted in the lottery since Samaki Walker in 1996, it goes without saying that management faced pressure from ownership to hit with the ninth pick. Summer league is just that, summer league, but if anything could be drawn about their selection prior to preseason it’s that DSJ is probably going to be a big steal. For a Mavs team trying to find its next generation of talent once their ageless smooth-shooting legend retires, the explosive point guard did nothing but turn heads on his way to averages of 17/5/4/2 and All-NBA Summer League First Team honors.

Smith has all the requisite skills required of the modern lead guard: athleticism, transition, pick-and-roll/pop, penetration, and improving shooting range/consistency. Defensively he has the strength, lateral speed, and hands to be a pest when engaged. His rookie season will be all about building upon this foundation and developing confidence and chemistry with his teammates.

Dennis can immediately impact the Mavs offense by using screens from his teammates. His has pick-and-pop options with Dirk and Barnes, and pick-and-roll lobs to the high-flying Nerlens Noel. Defenses may adjust, giving room and accounting for the screener by preventing the pass, but this only means more space for Smith to operate. With that explosive first step, he has shown assertiveness getting into the paint and finishing at the rim with force. Also, his jump shot looks technically smooth, and when the shot is dropping there is very little the defense can do to stop him. Smith’s “weakness” is a lack of size and length, but with his core strength and explosiveness there are absolutely no limitations that should prevent him from becoming a foundational franchise player on the offensive end if he dedicates himself to the game. Questions about his drive and desire persisted on a losing NC State club in college, but coach Rick Carlisle seems willing to let his rookie get solid burn whether as a starter or off the bench. With a significant role in the offense, playing time, and a very good chance at Rookie of the Year honors, it seems unimaginable that Smith doesn’t stay engaged and motivated all season long while the Mavs battle for a potential playoff spot.

Smith’s flexibility to run the offense or space the floor off the ball gives Carlisle flexibility to incorporate Smith into several types of lineups. With Seth Curry floating behind the three-point line, expect Smith to initiate the offense. When supersub Barea is in, Carlisle is always comfortable handing him the ball on the second unit. The same goes for Devin Harris and Yogi Ferrell. This means Smith could play shooting guard for short spurts if he can cover opposing 2-guards. Essentially, if Smith impresses Carlisle on the defensive end, it will be almost impossible to keep him off the court. The talent he brings to the offensive end is undeniable, and he relieves some pressure from Barnes’ isolation plays and gives the team a legitimate scoring option when the play breaks down. Who knows, maybe he can even extend Dirk’s career a season or two by forcing opponents to think twice about double teaming the offensive maestro in the high post.

Devin Harris or Yogi Ferrell may begin the season as the starting PG, but I can’t imagine that sticking for more than a month. The moment Dennis Smith is unleashed will be the beginning of a new era in Mavericks basketball. For all the things he can do, and all the things they hope he will do in the future, Smith’s progress during his rookie year is the X-factor for the Mavs’ chances of nabbing a playoff spot in 2017-18 – and ultimately competing for a title in the long term.