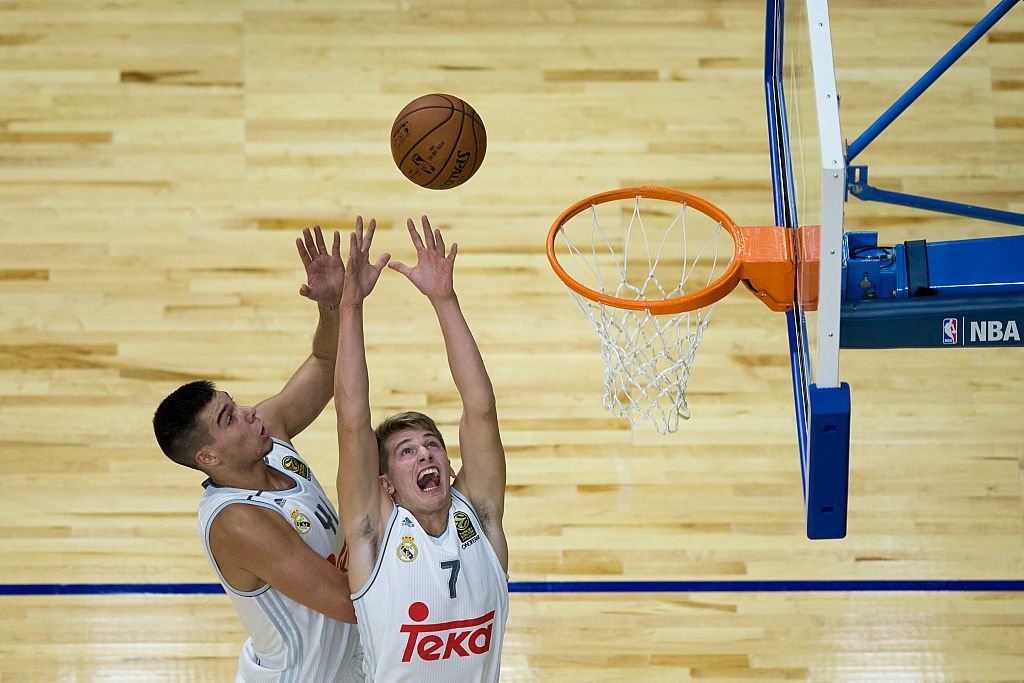 Luka Doncic is one of the few NBA prospects that gets you excited years ahead of their eligibility to enter the league. I’ve reluctantly resisted the urge to write platitudes on Doncic’s game for months. This past weekend the 18-year old became a FIBA Eurobasket champion and was named to the All-Tournament Team. The youngest player to be named to the team since Arvydas Sabonis in 1983. I can’t hold off anymore. It is time to pay the kid his respect and project what the future may hold for this phenomenal young star.

As a 16 and 17-year-old (a couple seasons ago) on Real Madrid of the Spanish ACB league, the second strongest professional basketball league in the world, Doncic averaged: 13 minutes, 4.5 points (on 50/40/77 shooting splits, 2.7 rebounds, and 2 assists.

The last few weeks in the FIBA Eurobasket Tournament, Luka averaged 29 minutes, 14.3 points (on 41/31/85 splits), 8.1 rebounds, and 3.6 assists on his way to a title and All-Tournament Team honors. This was a competition that included the likes of the Gasol brothers, Ricky Rubio, Kristaps Porzingis, Goran Dragic, Dennis Schroder, Evan Fournier, Jonas Valanciunus, and Dario Saric. Ignoring his counting stats and efficiency, the first thing that stands out is that a player of such youth has earned the coaches confidence to play significant minutes in legitimate high-level professional men’s games. This speaks to his maturity and IQ, two qualities that can only improve with experience. Being so far ahead of the curve not only against his current peers but in the history of the sport is astounding.

Being possibly the earliest bloomer of all early basketball bloomers on a professional stage is great, but that isn’t the reason scouts are picking their jaws off the ground right now. Luka’s current foundation of skills and physical attributes project him as a versatile offensive playmaker and scorer with immense room for improvement on both ends of the floor. The immediately apparent skill that is becoming more and more valued in the modern game is his shooting. Doncic has a beautiful jump shot with deep range. Although his shooting percentages aren’t exactly reminiscent of Steph Curry’s unanimous MVP season, Doncic’s form is flawless and his consistently improving free throw percentages are a useful barometer for where his shot will be further down the road when he acclimates himself to heavy minutes in an NBA rotation. Most importantly he already has the confidence to take and make big shots. The sample size is significant and his swagger is readily apparent. I mean, did you watch the video above? There are absolutely no floor spacing concerns with Doncic on the court, in sharp contrast to his prodigal Euro predecessor Ricky Rubio. That flaw alone has prevented Rubio from becoming a star. Doncic will have no problems shooting on or off the ball. His silky smooth release combined with his height (6-8) and hot handles allows him to effectively create shots for himself.

Creating shots for himself is a skill that will almost guarantee he has a long and successful career in the league. Creating shots for others is the skill that will allow him to become a transformative franchise player. Doncic has the hoops IQ to see plays before they develop and find teammates in stride with pinpoint passes. His vision and timing combined with his creativity and trickery allows him to freeze defenders with his eyes while accurately dishing the ball to his active teammates. Luka’s size and willingness to penetrate and slice the defense open allows him to make fantastic passes to the weak side, much like Lebron. Shooters in the weakside corner will be swishing 3’s in rhythm all day long when Doncic is running the offense.

Perhaps the most surprising playmaking skill Doncic has at such an early age is his feel and patience running the offense. Doncic pokes and prods the defense without forcing the issue until he finds the right play – whether it’s his own shot or a pass. This makes him a point guard in a forward’s body with the ability to be just as comfortable as the primary ball-handler or a spot-up shooter. Playing off Dragic for Slovenia is a perfect example of Doncic’s willingness and comfortability in multiple roles. The adage of “making his teammates better” applies to Doncic as much as it has to any other prospect coming into the league, including the likes of Rubio and Magic Johnson. He can already effectively transition between three positions on offense and gives the coaching staff freedom to use him in a variety of lineups. That flexibility is invaluable in the current landscape of the NBA, where the Warriors play positionless “total-football” on the hardwood, LeBron surgically slices open defenses, and the Rockets find open 3’s all over the floor. Did I forget to mention he runs the pick-and-roll as effectively as a veteran NBA starting PG? Well, he already does. In transition? Forget about it. He can go coast to coast for the dunk or drill the open 3 on the move.

One revelation at the FIBA tournament was Doncic’s improved rebounding. He looked like an elite defensive rebounder. They say rebounding instincts are nearly impossible to teach. Again, his IQ seems to be ahead of the curve, using his mind more than his strength against the grown men he is boxing out and out-rebounding. Eight rebounds in under 30 minutes of action for a kid playing perimeter positions is remarkable. Is there space for improvement? Undoubtedly. He may still grow and will certainly fill out his frame over. His effort and motor are unquestionable and his engagement to finish off defensive possessions with a box out is consistent. Defensive rebounding is a skill rarely praised on TV but is extremely valuable and earns major brownie points in the locker room with teammates (and perhaps more importantly, the coaching staff). If his shooting and playmaking skills make his teammates better on offense, it will be his effort on the defensive glass that will make an immediate impact on defense.

So is Luka Doncic perfect? Of course not. There is no perfect NBA prospect. LeBron James left high school with a shaky jump shot. Kevin Durant couldn’t lift a calculus book. Steph Curry lacked explosiveness. James Harden was sort of slow. Russell Westbrook couldn’t hit the side of a barn. Kawhi couldn’t really shoot either. All these prospects did share one very important trait though. They had the foundation on which to build upon their skills and eventually became the elite superstars of the league today. Doncic has the same foundation, and as I’ve already noted it may actually include a more diverse array of skills than any of those other prospects did at the age of 18. Doncic has proven himself against professional men, something they did not have the opportunity to do while playing in high school or against student athletes. Although all the signs were very promising the past few weeks, the one area Luka needs to continue to make steady improvement is the defensive end of the floor. There are two ends of the court and defense is as important as offense if you want to develop into a franchise player, let alone generational superstar.

Luka competes with the effort and intensity to contribute as a team defender, but lacks the strength and lateral foot speed to make an impact right away against NBA athletes. His defensive instincts and IQ are above average, so if he continues to bulk up while improving his explosiveness and footwork Doncic has the opportunity to become a good defensive player. Handling the daily grind of facing the best athletes in the world will be a whole different challenge than competing hard for three weeks against European competition. The progress he makes on defense will define whether Doncic becomes an offensive superstar, think T-Mac and Vince Carter, or a transformative generational basketball great, think LeBron. Doncic is so unique that it might be unfair to compare him to anyone else, but we are talking about potentially historic impact here, not just player prototypes.

The funny thing is that in terms of prototypes, if Luka’s combination of shooting and playmaking progresses at a decent rate it should still result in him following in the footsteps of perhaps the greatest European NBA career: Dirk Nowitzki, who became a strong rebounder but was never a very good defender overall. That would make Doncic a future first ballot Hall-of-Famer.

There you have it, I’ve done the unfathomable and given Doncic’s career projection the lower bound of a playmaking wing version of Dirk and the upper bound of a mix between Drazen Petrovic and Larry Bird. Absolutely ludicrous expectations to place upon the broad shoulders of a basketball prospect, and yet in line with the incredible accomplishments of the 18-year-old to date. Now we have nine more months (another full season) at Real Madrid to savor Doncic as he continues to blow all reasonable expectations away. Let’s see if the hype train subsides while other special prospects like Marvin Bagley and Michael Porter possibly supplant him atop draft boards by next June. But I wouldn’t bet against Luka.

Several months ago I planned on naming my next puppy after Luka. Those plans are currently on hold, but in a few years there is a legitimate possibility that my first born child will be named after him. That depends on only two factors; the baby’s gender and Luka’s progress.