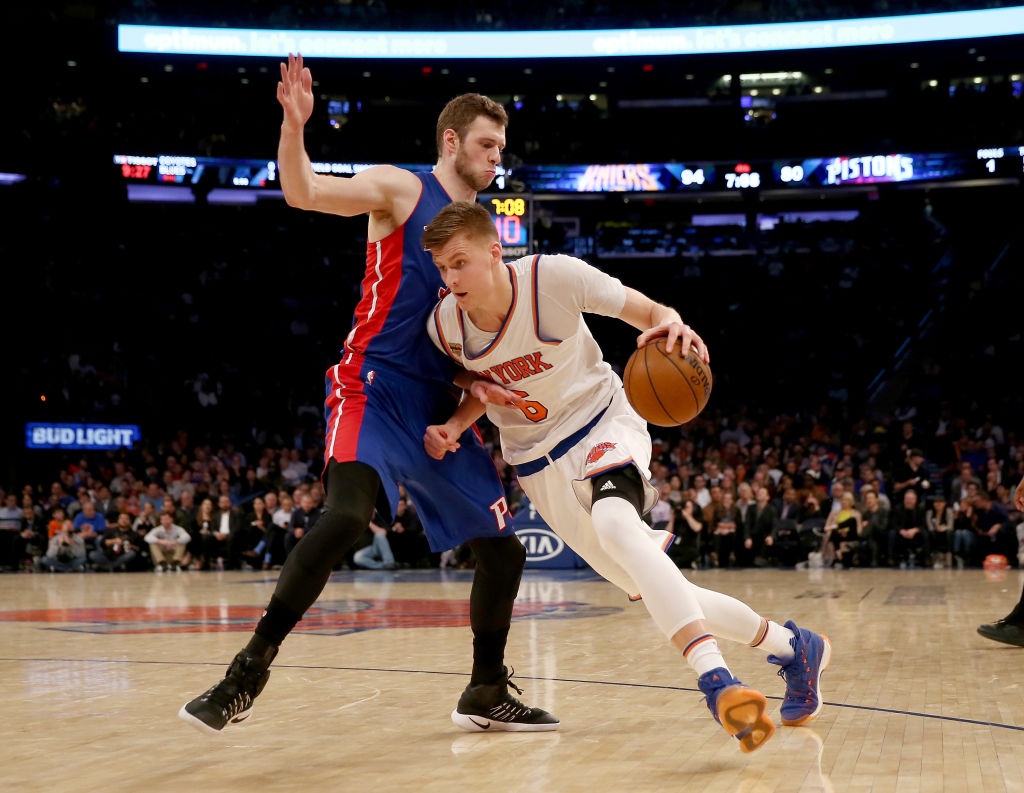 The Carmelo Anthony Era is finally over. This can only mean one thing; the Knickerbockers have a new sheriff in town. With great power comes great responsibility and Gotham will finally find out how much weight Kristaps Porzingis’s broad Latvian shoulders can carry. From the moment he entered the league, Porzingis blew away expectations and created a hype machine around his highlight-reel plays of putback dunks, step back 3’s and vicious blocks. That flashy ability isn’t going away, but now with the keys to his team, we will find out the true substance of his complete package.

Kristaps will have to be the primary scoring option and a team leader on the defensive end for the Knicks to have any shot of being competitive this season. Without the magnetism of Carmelo’s isolation offense around him anymore, Porzingis can expect to get a heavy dose of double teams for the first time in his NBA career. His ability to make quick decisions with the ball, whether to attack off the dribble, shoot, or pass will be under scrutiny from the New York City media.  Expect a lot more touches in both the high and low post with cutters and shooters spacing the floor.

Porzingis has shown the ability to score effectively inside and outside of the paint in single coverage, but he won’t be afforded anymore easy opportunities. Higher usage rates generally brings lower efficiency, so the 22 year-old deserves to be graded on that curve. His progress over 82 games will be the true determinant of whether the 7-footer is capable of becoming an effective superstar. There are plenty of talented scorers in the league, but Porzingis has an opportunity to learn how to command an efficient offense and become more than an offensive weapon.

The most basic and admittedly lazy comparison for most high-potential 7-footers with a sweet stroke is Dirk. Even a 22-year-old Nowitzki had a future Hall of Fame PG in Steve Nash helping him run the offense. With rookie Frank Ntilikina, journeyman Ramon Sessions, and backup Ron Baker rotating at the PG position, they are simply not going to provide the creativity that a budding star big would prefer. This is why it would be very exciting to see Porzingis channel a legend from a neighboring country south of his native Latvia. Lithuania’s own Arvydas Sabonis.

Even as a youngster, Sabonis had the size, strength, and agility to bully the likes of David Robinson down low. He could and would shoot 3’s but he didn’t lean on that aspect of his game. Instead, Sabonis exerted himself as a physical presence in the paint. His post moves were ahead of his time, and combined with his creativity and willingness to pass he became arguably the most dominant European player in the history of international competition. NBA fans only got to witness him about a decade after his prime (for Portland), but his skill package was still extremely effective. Porzingis may not have Sabonis’s natural physique or passing vision, but he has the ability and fire to channel inspiration from Sabonis to develop his own brand of skillfull yet physical play.

This season for the Knicks is all about process over results and developing their young talent, particularly Porzingis and  Ntilikina. Losing a lot of games may seem like that word the NBA front office seems to hate (tanking), but after decades of mediocrity the loyal Knicks fans will actually support seeing a youth movement. After missing summer league, the preseason will be an exciting opportunity for Frank to showcase his abilities. Coming into the season he is about as unknown of a quantity as you will see drafted in the top 10. Frank excelled in international junior competitions, but played a limited role on his pro team in Strasbourg. The general consensus stereotype many scouts settle on for him is George Hill, an effective two-way player without elite scoring or creative ability that seamlessly fills an effective role on any team in the league. It would be nice to see Ntilikina gain confidence in preseason and enter the regular season with a more defined role. The other options the Knicks have to start at point guard are temporary stop-gaps, and the earlier Ntilikina is able to start developing chemistry with Porzingis the better.

Every season NBA franchises enter the year with high hopes, expecting 82 games full of excitement regardless of their realistic shot to win a title. Steady progress may seem dull when it means watching Ntilikina acclimate himself, Tim Hardaway Jr. become a playmaker, Willy Hernangomez improve his defensive principles and veterans Courtney Lee, Michael Beasley, Lance Thomas, Kyle O’Quinn, Enes Kanter, Mindaugas Kuzminskas, and Doug McDermott all find their roles on a rebuilding team – but it is necessary. The excitement and suspense will arise from Kristaps Porzingis’s game, and we will find out if he is the hero that New York needs and deserves.