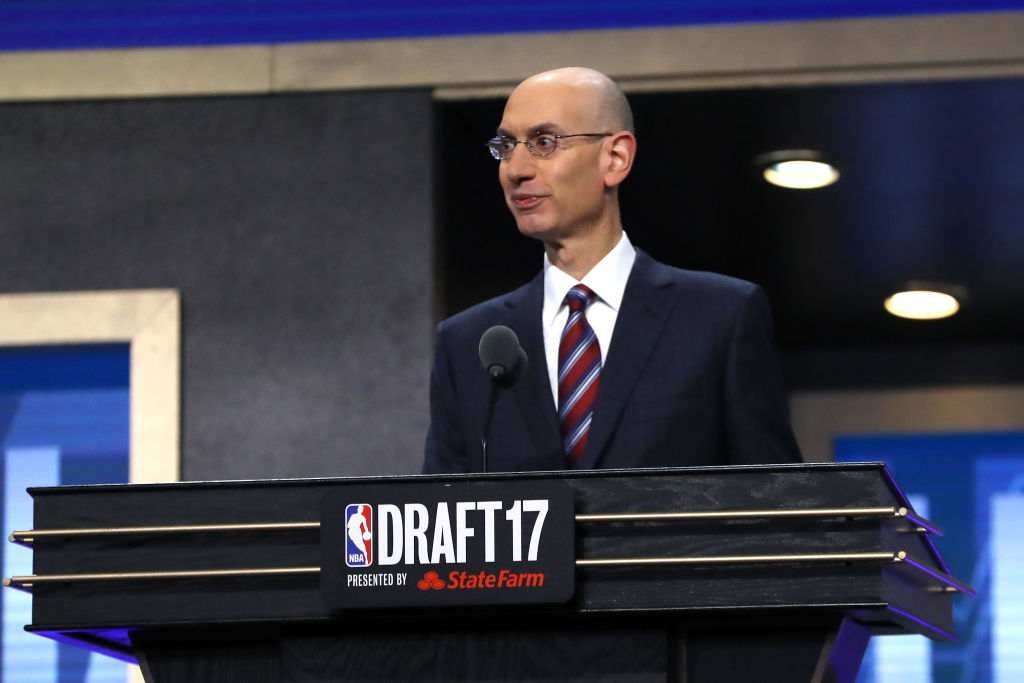 The NBA has changed its draft lottery odds for 2019, meaning this is the last season where outright tanking will be properly rewarded. Which teams would benefit most from racing towards the bottom?

The NBA Board of Governors voted last week to alter the NBA Draft lottery odds. Without getting into the minutiae of the changes, the worst teams will now have a lower chance of being awarded the top picks than before, and teams in the 5-10 range now have higher odds of leaping into the top-4 than before.

The idea is that it will be the end of tanking as we know at. While that’s not what will happen — blatant, all-out, Sam-Hinkie-style tanking — will no longer be quite as lucrative or well-rewarded as it once was.

But the changes do not take effect until the 2019 Draft, which means this season provides one more shot for teams to strip off all pretense of winning and race for the bottom. They can get “Poorer for Porter” if they like Missouri’s Michael Porter Jr. Or “Flunk-it for Doncic” if they like Luka Doncic. We’re still working on one for Marvin Bagley…

Without further bad jokes, here are the ten teams that would most benefit from tanking this season. We start with a dark horse candidate slotted in as an honorable mention…

Honorable Mention: Golden State Warriors – Everyone is complaining that the Golden State Warriors are ruining basketball. Expert pundits are also predicting a fracturing of the team when Klay Thompson demands a bigger role, or Draymond Green demands more money. Thus we solve all problems with a Warriors tank. Kevin Durant takes a year off to start a bakery with Ayesha Curry specializing in cupcakes, Stephen Curry and Andre Iguodala play professional golf for a year, and Draymond Green starts his own reality show and rakes in the cash.

That allows Klay Thompson to jack up all of the shots he wants, puff up his Hall-of-Fame numbers, and realize that shooting less and playing with Curry, Durant and Green is better than shooting more alongside JaVale McGee and Nick Young. The team spirals into the lottery, wins the top pick, and adds another elite piece. Then they promptly win five titles in a row. Win-win for everyone.

The Detroit Pistons are a team floating around the periphery of the playoff picture, and they are probably the favorite (among a handful of unappealing options) to claim the Eastern Conference’s eight and final playoff berth.

The Pistons have a collection of good players, but may be without the true star they thought they had. Andre Drummond has completely flatlined over the past two seasons, showing little-to-no improvement and continuing to be a liability at the free throw line.

Reggie Jackson had a terrible season last year, and needs desperately to right the ship before the Pistons look elsewhere at point guard. Avery Bradley, approaching 27 years of age, will be an unrestricted free agent for the first time next summer. Tobias Harris does not have the chops to be a top option. Luke Kennard and Stanley Johnson are nice young pieces, but neither is going to be a star.

This team is motivated to compete by both their proximity to the postseason and the competitive nature of Stan Van Gundy, which keeps them lower on the Tank Scale. But this team needs something more than they have, and a blue chip prospect would be a welcome addition.

On the one hand, the Mavericks should not be tanking this season. Dirk Nowitzki, one of the all-time greats, is likely playing one of his final seasons. This team should honor him by winning as many games as they can.

On the other hand, this team needs to replace Dirk Nowitzki, and could use another top prospect to pair with Harrison Barnes and Dennis Smith Jr. This draft is stocked with forward options that pair perfectly with Barnes moving forward.

One of the most confusing teams in the league, the Magic are deep and thin. That is, they go three deep with rotational players at every position, but don’t have a single star on the roster. Could Jonathan Isaac, their 2017 lottery pick, become a star? Sure, but the Magic thought that would happen with Mario Hezonja, Victor Oladipo, and Aaron Gordon, and none have panned out yet.

This team could use a dynamic guard to pair with the wing combo of Gordon and Isaac. But Frank Vogel is not the coach to preside over a no-effort team, which means the Magic will yet again pick up wins in March and April. They should tank, but they probably won’t — at least not intentionally.

The Grizzlies have more elite talent than anyone else on this list. Mike Conley is on the first team of players in NBA history never to make an All-Star team, and unfortunately doesn’t project to make it this year either. Marc Gasol is a passing, shooting, shimmying masterpiece of a center. Chandler Parsons, if he can get healthy, is a fringe All-Star player himself.

But starting next season Memphis owes its first-round pick to the Boston Celtics, keeping it only if they are in the top-8. If this team wants to entertain any level of contention over the next few seasons while Gasol and Conley are in their primes, they will need to give up that pick — making this season’s pick even more important. One more blue chip piece could keep their window pried open.

If this were a list of which NBA teams will finish with the worst records, the Suns would be closer to the top. With a shaky coach, few defensive pieces and injuries mounting across the roster, this team is not going to win many games this season, and that will provide another piece for #TheTimeline.

But with two unprotected Miami Heat picks, a roster flush with lottery picks, and the asset of Eric Bledsoe to trade, this team has plenty of pieces. What it needs most is time, for those teenagers to grow into mature basketball players, and the coach and locker room vets to see them to the top. Another piece is coming, and will be nice, but the Suns don’t need to tank quite so much as the five teams still to come.

The reason the Knicks aren’t higher on this list is that they have a bona fide star-in-the-making in Kristaps Porzingis. That’s the kind of player teams tank for, one with elite skills and upside. Porzingis should be an All-Star this season and many seasons beyond.

But outside of Porzingis and an average starting center in Willy Hernangomez, the Knicks have nothing. Tim Hardaway is worth half of what he receieved in a contract, and Joakim Noah less than that. Doug McDermott, Enes Kanter, Courtney Lee — none of these guys are changing the franchise. Frank Ntilikina is talented, but doesn’t project as more than a solid starter.

Getting another blue chip prospect to pair with Porzingis would give the Knicks something to be excited about moving forward, and give fans hope that something good might happen in MSG once again.

There is no team for whom it makes as much sense to tank this season specifically as the Sacramento Kings. Either Philadelphia or Boston will pick for the Kings in 2019, which means this is the year for Sacramento to bottom out and add one more piece.

That being said, the Kings are already flush with young talent. De’Aaron Fox. Frank Mason III. Bogdan Bogdanovic. Skal Labissiere. Georgios Papagiannis. Harry Giles. Justin Jackson. Buddy Hield. Malachi Richardson. That’s nine players in either their first or second seasons in the league, and all but Mason were first-rounders.

This team still can use a high-end prospect to pair with Fox, Hield and Labissiere. Giles could be that guy if healthy, but another bite at the apple would certainly help this team. They just aren’t as talent-starved as the teams ahead of them.

The Indiana Pacers have one player with star potential in Myles Turner, who looks like a steal as a late-lottery pick. But around him the Pacers have stocked the cupboard with middling players on middling contracts. Unless Victor Oladipo takes an unexpected leap or Domantas Sabonis somehow becomes more than a role player, the Pacers need another star.

That can only come through the draft, as the Pacers have shown no ability to draw marquee free agents. Players are traded or drafted in, and they leave when they can. Indiana needs a trip to the bottom before they can climb for the top. Whether they get out of their own way or fight for the eighth seed is to be determined.

Our list of the most likely teams to have the top pick would have Chicago at the top, but they fall one step behind on our list. The opportunity is there, as no team projects to win fewer games. The desire is there, as their preseason buyout of Dwyane Wade signals that this team doesn’t want any accidental wins.

But Lauri Markkanen balled out in EuroCup, and he could be the real deal. Zach LaVine is a 20-point per game scorer, even if he is recovering from a torn ACL. One year ago Kris Dunn looked like a future high-end starter at point guard. This team is by no means deep or talented, but they do have some talent, which drops them to 2 here.

They have some role players, from Dewayne Dedmon and Ersan Iylasova to Kent Bazemore and Marco Belinelli. Along with Dennis Schröder, that would make for a solid bench on a contender. The problem is, Atlanta will most likely start them. Youngsters Taurean Prince, DeAndre Bembry and John Collins are all talented, but none project as stars either.

If Atlanta wants to get a top-15 type player, they need to draft him. Right now, they may not have a top-50 type player. Any hope of contention comes from a long dance with the draft, and there is no time like the present. Whether Mike Budenholzer likes it or not, the Atlanta Hawks need to embrace the tank. Time to go Starvin’ for Marvin!