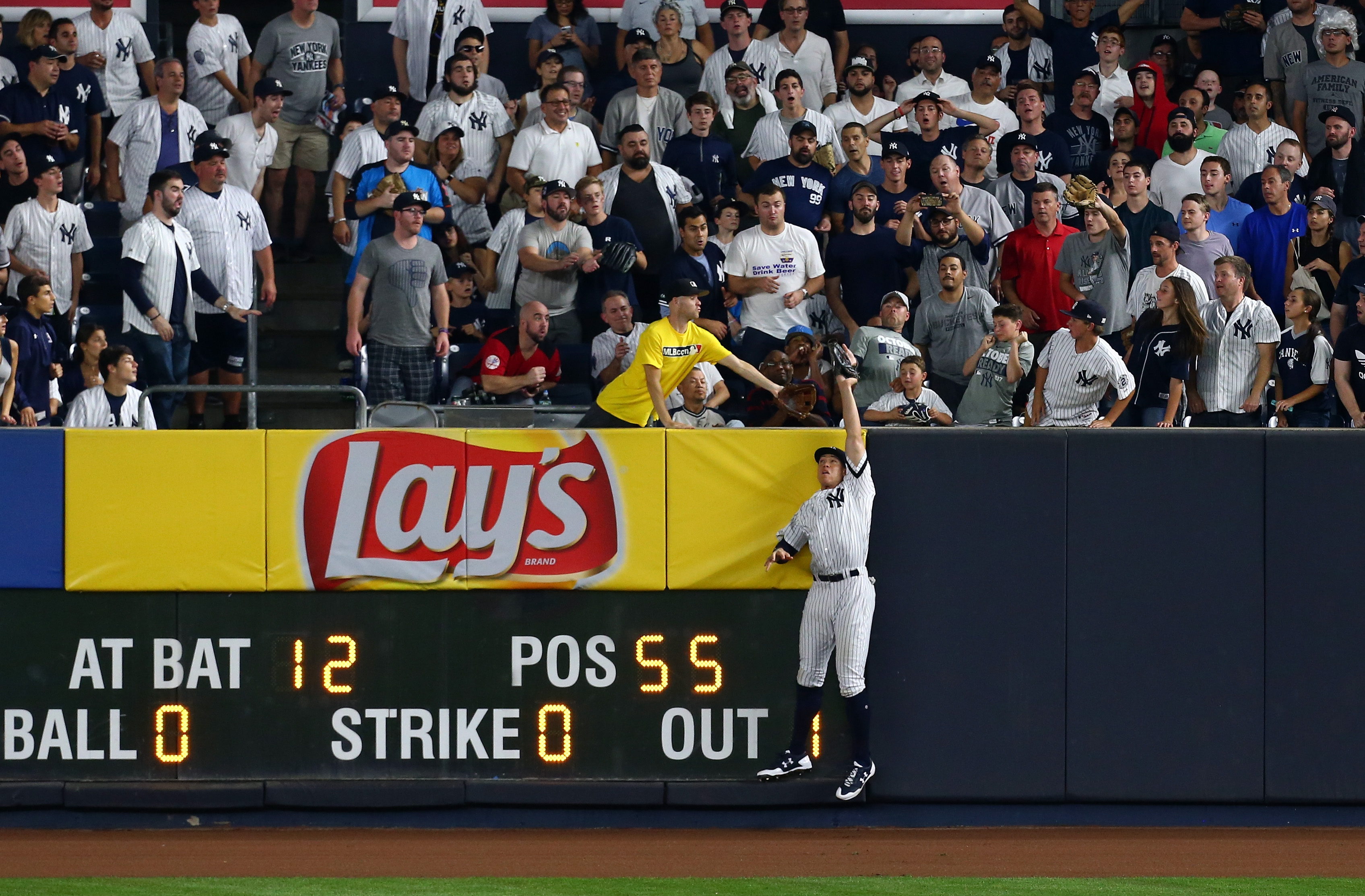 Last night’s Yankee game was the best playoff game I have watched in ages, for a variety of reasons. And one of them really should go in the “Justice served” — or is that “Judge served” — category.

Game 3 of the ALDS against Cleveland was the quintessential nailbiter, a 1-0 pitcher’s duel that kept me on the edge of my seat with nervous anticipation the whole game. Starting pitcher Masahiro Tanaka lived up to the hype — and his massive salary — as did closer Aroldis Chapman. The ballpark exploded with excitement when Greg Bird hit the only run in the game, off former Yankee Andrew Miller.

My favorite moment was when Aaron Judge helped save the game with a terrific catch in right field, taking a two-run homer away from Francisco Lindor. I’ve heard people say that it’s a good thing Aaron Judge is six feet seven, in order to make that catch. That may be true, but some of us tall people (cough, cough) couldn’t make such a catch if we were given two gloves, a ladder, and a butterfly net! So give credit where credit is due. Judge made a great catch.

There was also something awesome that happened because of that catch. Judge kept Zack Hample, the infamous baseball ballhog, from getting the ball. Hample is the 40-year-old dude, apparently from a rich family, whose “job” in life is catching baseballs. He’s caught over 10,000 of them, and has been rumored to fight little kids for the balls!

Hample has been in the public eye for ages, and while his quest might have been charming when he was a kid himself, it looks pathetic now. This isn’t like the folks in McCovey Cove in San Francisco on kayaks, which at least is cool. Hample just comes across as pushy and spoiled rather than clever. The hissy fits he has had when he isn’t able to get the ball don’t help his rep, either.

He caught A-Rod’s 3000th hit, and then had a whole big drama about how much he wanted for the ball. Even I, who thinks such fans should sell to the highest bidder, thought he came across as a drama king! He also sneaked into Fort Bragg for an MLB game played for members of the military and their families so he could catch balls. What a douche.

This isn’t Jeffrey Maier, who was an 11-year-old kid caught up in the excitement, and whose going after Jeter’s home run ball helped the Yankees in 1996. Hample is a grown-ass man. He knows better.

Look where his hand is, touching the top of the outfield wall. Look where his glove is. This has to be against the rules of MLB, doesn’t it?

I think Steve Bartman got an incredibly raw deal for becoming a scapegoat and pariah for catching a foul ball in 2003 (and he didn’t cause the Cubs to cough up eight runs against the Marlins that night!) But Hample could have cost the Yankees the win last night. He deliberately injected himsef into potentially affecting the outcome of this playoff series with his actions.

My hope is that the Yankee brass saw what Hample did and decide to ban him from Yankee Stadium for good. Dare to dream!