Why not grade the 2017 NBA rookies after one week? 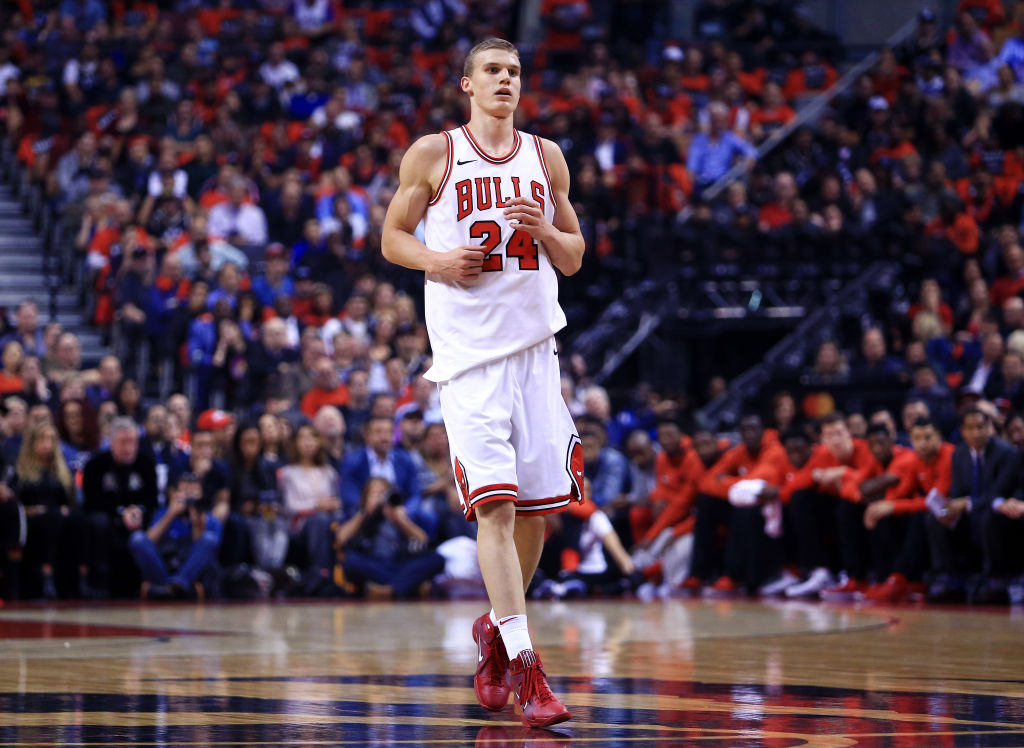 Why not grade the 2017 NBA rookies after one week?

The NBA season is just beginning, and there are some surprises. The Orlando Magic are 6-2 and tied with Boston on top of the Eastern Conference. (Seriously. The Magic are 6-2. That’s not a typo.) The Brooklyn Nets are the third highest scoring team in the NBA (114.6 ppg), and the Cleveland Cavaliers are 3-5 and struggling to start. That one’s actually not a surprise since they’re on cruise control until the playoffs start.

Some members of the 2017 rookie class have been surprising. Others have underwhelmed, but it’s only been a week’s worth of NBA games for them. (Please note I said the 2017 rookie class. That would not include Philadelphia 76ers forward Ben Simmons whose averaging 18.5 points, 9.6 rebounds, and 7.9 assists for a 4-4 Sixers squad.)

Even though it’s still early, what better time it is than now to give arbitrary grades for rookies that have only played seven games or less, right?

Markelle Fultz, Philadelphia 76ers
4 games, 0 starts: 19.0 MPG, 6.0 ppg, 2.3 rpg, 1.0 apg
Grade: Incomplete
Last year’s consensus #1 overall pick only played four games for the Sixers until he was shut down for three games. Three games turned into three weeks after it was discovered Fultz was suffering from muscle imbalance and soreness in his shoulder-blade. (There’s a fancier, more medical way to say that, but you can Google it if you really want to.) When he played (off the bench, mind you), Fultz did have some NBA-ready moves like his spin move and his “pull up jimbo”. It’s hard to grade Fultz at this point. I’ll reassess at the All-Star Break.

Jayson Tatum, Boston Celtics
7 games, 7 starts: 33.1 mpg, 14.0 ppg, 7.0 rpg, 1.7 apg
Grade: B
When Gordon Hayward was injured on the first night of the season, it made perfect sense that Tatum would be one of the beneficiaries. Hayward and Tatum play similar positions, but totally different styles, obviously. That being said, Tatum has been a reason (not THE reason) for the 5-2 Celtics. (THE reason is the progression of Jaylen Brown. You can say Kyrie Irving if you want to. I won’t.) Tatum’s bread-and-butter has always been his mid-range ability, but Tatum is shooting 50% from three (albeit on only 2.9 3PA per game). That’s a plus for the Celtics.

Josh Jackson, Phoenix Suns
7 games, 3 starts: 25.0 mpg, 10.3 ppg, 3.7 rpg, 0.7 apg
Grade: D
The Suns season has been a trash fire so far. Eric Bledsoe wants out. They fired Earl Watson three games into the season — something they should have done last year — and it’s hard to find your rhythm as a rookie under those circumstances. Here’s what I will say. With Jackson in the starting lineup, the Suns were 0-3. Jackson is coming off the bench, now, for head coach Jay Triano, and the Suns are 3-1. That leads me to believe that Jackson isn’t quite ready. Jackson’s .444 TS% doesn’t help.

De’Aaron Fox, Sacramento Kings
7 games, 1 start: 13.4 ppg, 4.3 rpg, 5.0 apg
Grade: B+
Speaking of trash fires, let’s talk about the Kings. Sacramento used the #5 pick on De’Aaron Fox, but then gave George Hill $57 million over three years. What?!? Give Fox the keys and let him drive. (That’s the one contract that puzzled me. That and the two-year, $24 million the Kings gave Zach Randolph.) I could spend a whole article on the Kings’ “numbskullery”, but I don’t want to get a concussion banging my head on things. Fox has looked very good in his first week. The runners and floaters have translated over well. The baseline to baseline speed is every bit as advertised, and if you watch his game against Indiana last week, he’s getting confident with that little mid-range jumpshot. Uh oh!

Jonathan Isaac, Orlando Magic
6 games, 2 starts: 18.2 mpg, 5.3 ppg, 4.8 rpg, 0.8 apg
Grade: D-
I wish I could say more about Isaac considering I was hoping the Sixers were going to trade down to get him and more assets, but I can’t. Isaac hasn’t really found a position, yet, in Frank Vogel’s offense. That said, his 99 DRtg is good for a rookie. Granted, he’s only played 18 minutes a game, but defense is defense.

Lauri Markkanen, Chicago Bulls
5 games, 5 starts: 32.2 mpg, 15.6 ppg, 9.6 rpg, 0.4 apg
Grade: A
Uhm. Holy crap. Where did this come from? One of the biggest knocks on Markkanen was the thought he was a “sawft” 7-footer who can’t rebound. Well, he’s averaging close to ten per game and leads the Bulls in total rebound percentage (15.3%). We know what Markkanen CAN do, though: shoot the three. Markkanen is shooting 42% from three in the five games he’s started and went 5-8 from deep against the Cavaliers on October 24th. It’s early, but it’s worth noting that Markkanen is the only lottery pick of the 2017 class with multiple double-doubles (2). It’s not Lonzo, Fultz, Tatum, or Jackson. It’s Lauri Markkanen. You can send all apologies related to Markkanen to my Twitter account.

Frank Ntilikina, New York Knicks
4 games, 0 starts: 4.8 ppg, 1.8 rpg, 2.5 apg
Grade: Incomplete
I was going to give an “F” — not because of my inclination to hate the Knicks because I’m a Sixers fan but because Ntilikina has had a knee bruise and an ankle injury since he’s been drafted by the Knicks. If I have to give the Knicks an “F” for Ntilikina, I’d have to give the Sixers an “F” for Fultz, and I’m not doing that. Incomplete it is.

Dennis Smith, Jr., Dallas Mavericks
6 games, 6 starts: 28.2 mpg, 11.3 ppg, 3.0 rpg, 5.7 apg
Grade: B
When you watch Smith play, it makes you realize the Mavericks haven’t had someone this fast and dynamic — well, ever. It’s been at least a really long time. Maybe they had a guy with blazing speed in the 80s, but someone will have to point that out to me. It’s nice that Smith attacks the lane (39.7% of his attempts are within 0-3 feet), but it’d be nice if he was better with his free throws (45% FT). Here’s a side note. He hasn’t dunked someone into oblivion, yet, but Smith came dangerously close to dunking two Atlanta Hawks into the “Upside Down”.

Zach Collins, Portland Trail Blazers
2 games, 0 starts: 7.5 mpg, 0.0 ppg, 1 rpg, 0.5 apg
Grade: F
I’m giving the Trail Blazers an “F” on this based solely on the fact they traded up to get Collins with Malik Monk still on the board. The picks Portland traded away were 15th (Justin Jackson) and 20th (Harry Giles). Yeah, I’d rather have Monk or Jackson/Giles versus Collins, and you can quote me on that.

Malik Monk, Charlotte Hornets
7 games, 0 starts: 21.7 ppg, 7.9, 2.0 rpg, 1.7 apg
Grade: D+
Monk’s shooting (his calling card) has been abysmal. The former Kentucky guard is only shooting 29.4% from the field and 27.5% from three. The “glass half full” part of me is saying that Monk is shooting close to six threes a game, so it’s only a matter of time before we get the “Malik Monk hits 10 three pointers” game. Hopefully, it’s sooner rather than later.

Luke Kennard, Detroit Pistons
4 games, 0 starts: 13.3 mpg, 4.8 ppg, 1.8 rpg, 1.0 apg
Grade: D
Kennard is another case of a Duke shooting guard taken because of his ability to shoot. The problem with Kennard is that Langston Galloway and Avery Bradley are sucking up all the minutes at the shooting guard position because Stan van Gundy wants to win games (for some odd reason).

Donovan Mitchell, Utah Jazz
7 games, 3 starts: 22.1 mpg, 9.3 ppg, 1.4 rpg, 2.4 apg
Grade: C
Mitchell was the darling of NBA Summer League, and there was talk of “Life without Gordon Hayward” being not so bad thanks to Mitchell. Why that happened, I don’t know, because you can’t substitute Mitchell for Hayward and expect equal proportion — at least not right away. Don’t get me wrong. I think Mitchell can be a two-way monster in time, but he’s just “meh” right now. He’s not super special, but he’s also a nice piece for Utah to use in their rebuild with Rudy Gobert, Rodney Hood, and Ricky Rubio. (You heard me: Ricky Rubio.)

Bam Adebayo, Miami Heat
4 games, 3 starts: 20.3 mpg, 5.8 ppg, 6.0 rpg, 0.0 apg
Grade: C+
Adebayo was the last pick of the lottery and was seen as “Hassan Whiteside Insurance” — which is fitting considering Whiteside has missed the last five games with a bone bruise in his knee. Adebayo has started the last three games for the Heat and had his best game when he had his first double/double (13 points, 13 rebounds). Oh, did I mention that 10 of those 13 rebounds were OFFENSIVE rebounds. If only Adebayo was any good shooting the ball outside six feet from the basket. He and Whiteside would get all the rebounds. ALL. THE REBOUNDS!