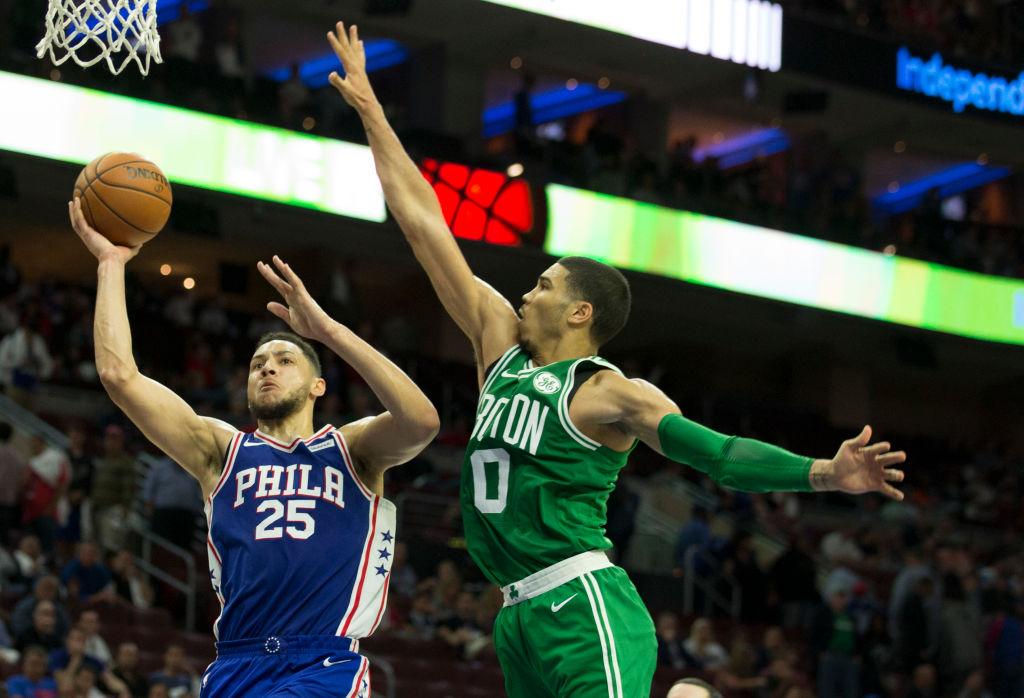 With a dozen or so games under their belts, the league’s best rookies are showing out. Who leads the Rookie Ladder a month into the NBA season?

A lot has happened in the three months since the last edition of the Rookie Ladder came out. For starters, games began, and NBA fans got their first taste of what the 2017 Rookie Class has to offer. The answer? So, so much.

Already rookies are playing huge roles for good teams that no one expected, from OG Anunoby in Toronto to Dillon Brooks in Memphis. Dwayne Bacon has been a key reserve for Charlotte, while Malik Monk has basically run the bench offense for those Hornets. Mike James is a name no one knew before the year. Daniel Theis anyone?

Since August, Markelle Fultz has fallen out of the conversation for Rookie of the Year, while dominating the conversation for how poorly Philly is at handling the media. The second pick in the draft, Lonzo Ball, can’t seem to lead a normal rookie life and instead gets targeted by every opponent he plays. Yet he still finds time for plays such as this:

As an incredibly strong rookie class jockeys for position, who will come out on top of this early-season edition of the Rookie Ladder?

After sitting out a year due to injury, the expectations generally placed on a first overall pick were mostly absent from Ben Simmons coming into the year. But Simmons was the top pick in the 2016 NBA Draft for a reason, and he has come out looking like one of the best rookies in years.

Simmons has played in 11 games and already racked up seven double-doubles, as well as a pair of triple doubles. Only two players in NBA history have recorded two triple doubles in their first nine games: Simmons and Hall of Famer Oscar Robertson.

Simmons leads all rookies in scoring (17.8 points per game), rebounds (9.4 per game), assists (7.8) and steals (1.7). He is doing all of this while not shooting his team out of games or giving opponents an open hole to attack on defense. When Simmons is on the court the Philadelphia 76ers outscore the opponent by 1.5 points per 100 possessions.

If Simmons keeps this up, he will deliver one of the all-time great rookie seasons and completely squash the competition. With Markelle Fultz sitting out and Joel Embiid drawing double teams, Simmons has been free to handle the ball and make plays, from lob passes to one-handed dunks. So far it’s been clear who deserves the award, and there is no reason to think he won’t still be the favorite by the end of the season.

Leading into this year’s NBA Draft, many draft pundits ranked Tatum anywhere from two to ten on their pre-draft rankings. Here at The Lottery Mafia some of our writers were split, with both our head of draft content and managing editor ranking Tatum in the mid-lottery range and yours truly slotting him second. Now that the season has started, it’s clear only one of us was correct. (Editor’s Note: Tatum looks absolutely terrific, but slow your roll my friend!)

Jayson Tatum has been thrust right into the spotlight as Gordon Hayward’s replacement, and he has absolutely thrived. Offensively he has spaced the floor, knocking down 52.9 percent of his three-point shots. Even when that number normalizes back towards league average he should be a plus shooter. He has rebounded well (six per game), defended hard and generally been a strong rotation piece — and often starter — for the Celtics.

Many rookies are getting playing time, but few are doing so and making a positive impact, and fewer still are making an impact off the bench for a true contender. Tatum is doing just that for the Celtics, with a 5.3 plus-minus and a defined role.

Wait a second. Markkanen is the thin, lanky big built like a stick figure whom the Bulls barfed up Jimmy Butler for. He’s supposed to be a bust so we can continue making fun of Chicago’s front office. If he’s good, then we may have to start rethinking all of those clever burns unleashed on Chicago…

Well unfortunately for us, and very fortunately for Chicago, it appears that Lauri Markkanen may be something special. He is shooting from all around the court, knocking down 2.7 three-pointers per game (tops among rookies) while averaging 15.8 points. Although the team being outscored by an average of six points per game, when Markkanen is on the court the Bulls are only narrowly outscored. Now we just need a great nickname…

My pick for Rookie of the Year before the season began, Smith has put in the sort of solid start that would normally have him as an early favorite for the award. But as much as last year’s race left much to be desired, the title of best rookie this year is going to be one that is earned through excellence.

Smith has been a highlight factory for an ailing Mavericks team, with nasty dunks circulating around NBA Twitter. Defensively he has made his share of rookie mistakes, but he is competing and Rick Carlisle is playing him. Dallas’ inability to win games may hurt him in the end, but Smith will be in the mix all season long.

LOS ANGELES, CA – OCTOBER 02: Kyle Kuzma #0 and Luol Deng #9 of the Los Angeles Lakers defend against Mason Plumlee #24 of the Denver Nuggets during the second half of a preseason game at Staples Center on October 2, 2017 in Los Angeles, California. NOTE TO USER: User expressly acknowledges and agrees that, by downloading and or using this Photograph, user is consenting to the terms and conditions of the Getty Images License Agreement (Photo by Sean M. Haffey/Getty Images)

From the top ten picks…to a player few expected would accomplish anything in the NBA. Many draft pundits blasted the Lakers for wasting a late first-round pick on a stretch-4 who was a middling shooter at best. Then he dominated Summer League and has been the Lakers’ best rookie this year.

Kuzma has been in a crowded rotation at power forward with Julius Randle and Larry Nance Jr. Even so he has averaged 14.8 points per game, with 6.5 rebounds and 1.2 steals. The threes have been there as well, as Kuzma is dropping in more than one a game. Can the hot streak continue? Is Kuzma for real? He sure seems to be, but stay tuned.

And now from late first-round pick to second-rounder Jordan Bell, who has been downright dirty for the defending champs. This is what everyone feared when the Warriors bought the pick from the Chicago Bulls, and Bell has been better than expected.

Steve “Kumbaya” Kerr insists on letting all of his big men play as often as possible, which has kept Bell’s minutes down significantly. But even so, Bell has forced himself into minutes with the starters and excelled. His per-36 numbers are 14.4 points, 9.2 rebounds, 3.6 assists, 2 steals and 2.4 blocks. In those limited minutes he is Plus-4.5, and pro-rated to 36 minutes he would be Plus-18.

Bell should soon be firmly entrenched over Kevon Looney and Damion Jones, but the trick will be pushing past JaVale McGee or Zaza Pachulia. Both veterans bring something Bell does not, of course, but his combination of athleticism and motor make him dangerous on both ends of the court. He should be getting more minutes, and if he does he will push the players ahead of him on the rookie ladder.

Power to the 2017 Oregon Ducks! Brooks is the second rookie from last year’s Final Four team to make this list after Jordan Bell, and the second to be playing a major role for one of the league’s best teams thus far. Whether or not Memphis drops off, for now they are 7-4 and knocking down contenders left and right.

Brooks has been key off the bench (and recently as a starter) for the Grizzlies as a gritty wing, and he is part of a bench group that frequently gains ground against opposing second units. A second-round pick, Brooks is seeing 29.7 minutes, and the Grizzlies outscore the opponent by 6.8 points on average when he’s in. Brooks is perhaps the season’s biggest rookie surprise.

during the first half of the NBA game at Talking Stick Resort Arena on November 6, 2017 in Phoenix, Arizona. NOTE TO USER: User expressly acknowledges and agrees that, by downloading and or using this photograph, User is consenting to the terms and conditions of the Getty Images License Agreement.

Never mind, the surprise of the season is Mike James of Phoenix. No Eric Bledsoe, no Brandon Knight, no head coach? No problem! Mike James has leapt from two-way contract to two-way guard extraordinaire, and upon stepping into the starting lineup went 4-1. Phoenix has since fallen back to earth, but James is no less impressive for his impact.

A rookie out of small Lamar University, James has dropped 12.3 points, four assists and a steal per game. Although no one is saying he is a better player than recently-traded Eric Bledsoe, he enters each game with a much different mindset. Bledsoe was playing out the line on a team going nowhere; James is earning his spot in the league. Soon his 45 days in the league will be up, and the Suns will need to make a decision on whether to drop a player (or open up a roster spot via trade) to keep him around.

Donovan Mitchell was the trendy dark horse pick prior to the season, the player outside of the top nine selections who could steal the title. To say he has been a disappointment would be wrong, but other players have certainly been more impressive.

Defensively, Mitchell has been incredible, all long limbs and high motor clogging up passing lanes. Offensively he has room to grow, especially on a Utah team that desperately needs more shot creation. He is averaging 13 points per game, along with a surprising 1.8 three-pointers. If he continues to develop, he will be a downright scary chip for the Jazz down the road.

With apologies to Lonzo Ball, Malik Monk, Frank Ntilikina and John Collins, the final spot on this edition of the rookie ladder goes to De’Aaron Fox. While the Kings themselves have arguably been worse than advertised, Fox has leapt in to lead the backcourt in scoring. He is slinging 5.5 assists per game as well while playing pestering defense.

LAS VEGAS, NV – OCTOBER 08: De’Aaron Fox #5 of the Sacramento Kings handles the ball against the Los Angeles Lakers during their preseason game at T-Mobile Arena on October 8, 2017 in Las Vegas, Nevada. Los Angeles won 75-69. NOTE TO USER: User expressly acknowledges and agrees that, by downloading and or using this photograph, User is consenting to the terms and conditions of the Getty Images License Agreement. (Photo by Ethan Miller/Getty Images)