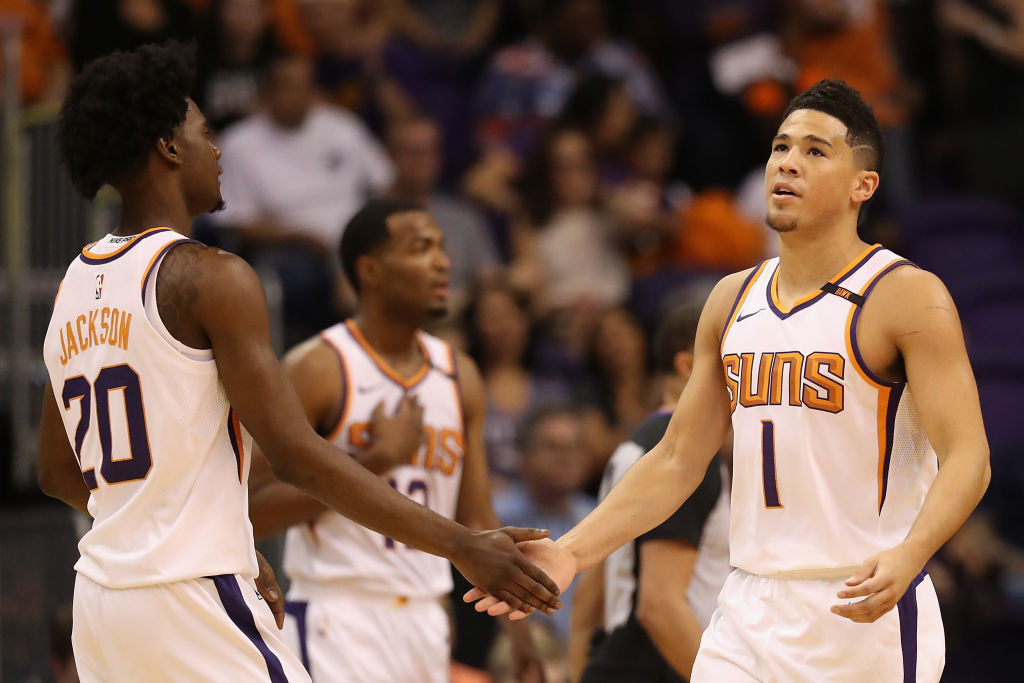 The apple of my eye is currently the Phoenix Suns.

After trading Eric Bledsoe to the Milwaukee Bucks, firing head coach Earl Watson three games into the season and allowing Lonzo Ball to put up a triple-double on them and seeming like a tire fire on defense, the Suns are operating in an already weird space: Allow the young kids to grow and develop and make sense of the timeline.

Since the end of the Steve Nash era, the Suns have operated blindly. The team added a ton of free agents, only to watch them be terrible and the team, in turn, became awful. They gained some traction under Jeff Hornacek and the two-man point guard tandem of Bledsoe and Goran Dragic, but then they added Isaiah Thomas and created a friction that resulted in all three gone within three years.

Now, they came into the season with #TheTimeline as a mantra. Preaching youth and time as they grow. With the majority of rotation players under the age of 25, it’ll be a long season, but hopefully a fruitful one.

Devin Booker is the star of the class, and maybe that’s a good thing. At the time of this writing, Booker leads the Suns with 21.3 points per game, but the question has never been his offense. He’s an excellent offensive player who can not only score, but create, as evidenced by his 3.8 assists. Booker’s ability to create has been a virtue for his offensive game and as a offensive centerpiece.

However, if Booker can’t evolve into a better defender, where are we going with him as he inches closer to a max contract? You’re looking at Klay Thompson without the defense and while that archetype has some value, I have questions about what ideally goes around Booker at this stage, let alone when he’s a significant percentage of your cap.

The two key pieces of the rebuilding process are Josh Jackson and Dragan Bender.

Same for Bender the season before. As the fourth overall pick of the 2016 NBA draft, Bender showed the ability to space the floor and defend various positions overseas, making him an ideal fit for the NBA. While the progression has been slow for both players, they’re the key to Phoenix’s resurgence.

Jackson and Bender represent a key aspect of today’s NBA – the ability to defend multiple positions. Both Jackson and Bender, again, in spurts, have shown the ability to play solid defense when they’re out there, and against different positions. If both players can reach their full defensive potential, Phoenix may have two of the better young defenders in the league.

The other players are mixed bags. Marquese Chriss has the athleticism you want, but his lack of basketball I.Q. limits his upside. Tyler Ulis could be a fine backup, but not much else and T.J. Warren is a master at getting buckets and that’s about it. Add Derrick Jones Jr. (long-term project, super athletic) and Davon Reed (rookie with 3-and-D potential) and you have a hodgepodge of interesting role guys.

The draft will once again have to be a place of virtue, as the Suns will have another top-five pick, as well as Miami’s first-round pick and if it falls between 11 and 18, the Milwaukee Bucks’ first-round pick. Focusing on just their pick, the Suns could use Luka Doncic, who can come in and serve as a big, creative point guard.

They could also use someone like Texas’ Mo Bamba. Bamba projects to be a Rudy Gobert type player – someone who can serve as the last line of defense and anchor a top-10 defense one day. Having guys like Bamba with Jackson and Bender in front of him to switch and force them into Bamba wouldn’t be the worst thing in the world.

It remains to be seen what ultimately happens to the Suns and their roster. However, with cap space remaining, several intriguing players and a vacant head coaching spot, it’ll be another chance to start a new era in Phoenix and this time, perhaps a successful one.