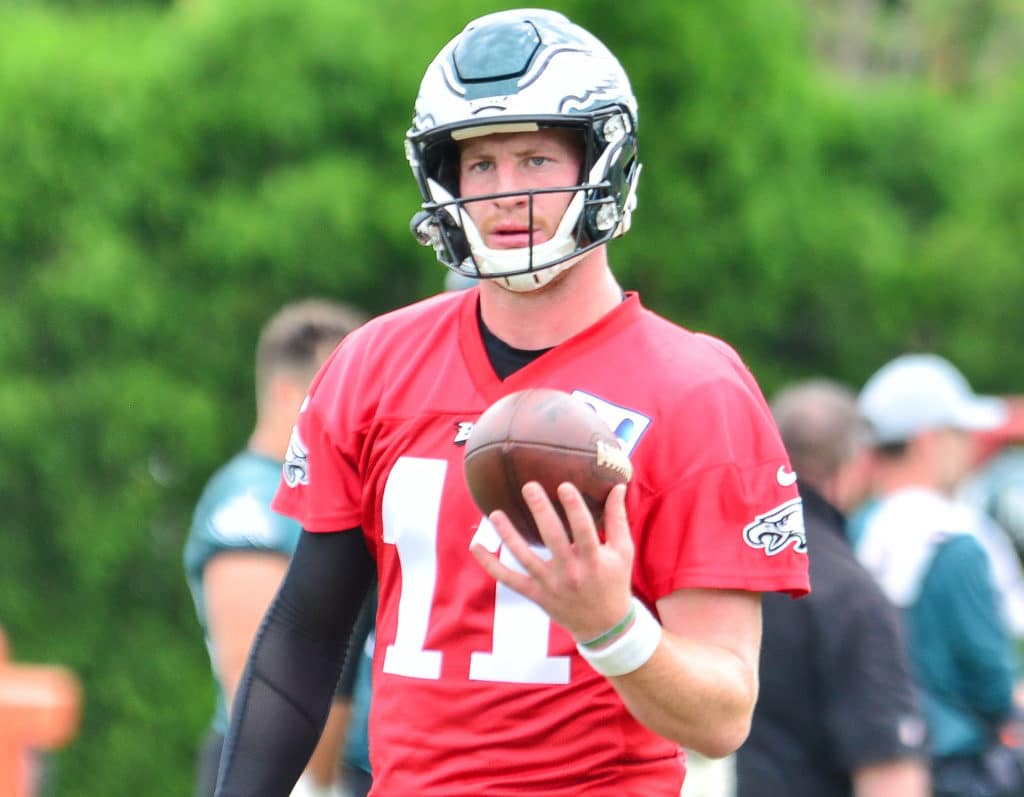 This ain’t real football. You know that. But it’s all we’ve got right now.

I don’t think you can evaluate much from these OTA drills regarding how a guy will respond when the real hitting begins in earnest. But I guess you can look for skill sets.

It was “open to the media” day at Eagles practice on Wednesday. Naturally we get some knee-jerk reactions from the guys with press passes.

Tommy Lawlor: “Wentz continues to surprise us with how far he’s come this quickly. He began participating in 7-on-7’s this week. He was limited today, but the fact he’s out there in a group setting like that is incredibly impressive. Throwing in individual drills is fairly simple. There is no pass rush in 7-on-7’s, but you still have a more advanced setting. The QB has to make reads and move around a bit. This is a long way from real football, but Wentz continues to make progress and impress every step of the way.

“It is natural to say “Slow it down, big fella.” His body needs time to heal and build strength. Still, some guys are freaks and are at their best when they really push themselves. It certainly looks like Wentz fits in that category.”

Sheil Kapadia:  “Covering the slot once again is De’Vante Bausby (Sidney Jones did not participate in today’s practice). Bausby comes up with a red-zone interception of Foles, demonstrating excellent body control. I asked Bausby afterward to break down the interception, and he offered what might be the most detailed description of an OTA rep I’ve ever heard.

“Then Bausby gets Nate Sudfeld for another pick. And later, he breaks up a Foles pass in the end zone. Bausby is officially a player to watch this summer. He’s really played well during the practices we’ve watched.”

Jimmy Kempski: “In the three practices the media has attended, Isaac Seumalo has not participated in any way during team drills other than to serve as the shotgun snapper during 7-on-7’s, 2-on-2’s, and 3-on-3’s. In other words, he has done no blocking at all. This is the role that is typically reserved for the fourth string center, if there is one. At times in the past, this job went to Jon Dorenbos.

“Seumalo does not appear to be injured in any way, so his near non-existent role during OTAs is interesting. Clearly, Seumalo would be the second string center if the season began today.

“So why isn’t Seumalo participating in team drills? I’d ask him, but he’s never around during locker room sessions. One theory could be that the team is keeping him from getting injured and potentially shopping him.

“As we noted a couple weeks ago, Seumalo is a player who would make sense for the Eagles to trade. A year ago, after an encouraging rookie season, Seumalo was being thought of as a long-term replacement for Jason Kelce at center. Now? Not so much. Kelce was arguably the best center in the league last year and is now a Philadelphia legend, while Seumalo was a rare disappointment on a Super Bowl winning team full of overachievers.

“Seumalo has already played five different positions (LG, C, RG, RT, TE) in his two years in the NFL, and is the type of versatile offensive lineman smart teams covet. With so many teams around the league in desperate need of offensive line help, some team out there might find it worth parting with a mid-to-late round pick for Seumalo. That situation deserves a continued look as the spring continues.”

Jeff McLane:  “Here’s a play-by-play (of sorts) from drills involving the first team units: With Cox absent, there wasn’t one projected starter on the defensive line. Derek Barnett and Chris Long were the first team ends, and Destiny Vaeao and Elijah Qualls were the tackles. Corey Nelson, Kamu Grugier-Hill and Nathan Gerry were the first-team base linebackers. I can’t imagine that front seven would elicit much fear in opposing offenses, but we’re three months from actual football. Foles had a couple of impressive downfield throws to tight end Richard Rodgers during 7-on-7s. Running back Jay Ajayi dropped a dump off from Foles during team drills. Dallas Goedert pulled in a Foles pass that was slightly behind him. The rookie tight end has looked agile.

“The second team: Sudfeld connected with receiver Shelton Gibson on a deep corner fade for a “touchdown.” Some defenders signaled that Gibson had stepped out of the back of the end zone, but the offense celebrated. Wentz took second team reps during 7-on-7s. That amounted to all of four plays. He hooked up with the familiar hands of Zach Ertz on his first two tosses, found Goedert on a crosser, and hit receiver Mike Wallace on a slant. Sudfeld jumped back in with the second unit during team drills and was stymied by Bausby and the unblocked Grugier-Hill, who also batted a pass to the ground.”

Ah, none of this means much in terms of actually judging how guys will perform when real tackle football for all the marbles begins in September. Maybe the best thing about these OTAs is there are no further injuries to report.