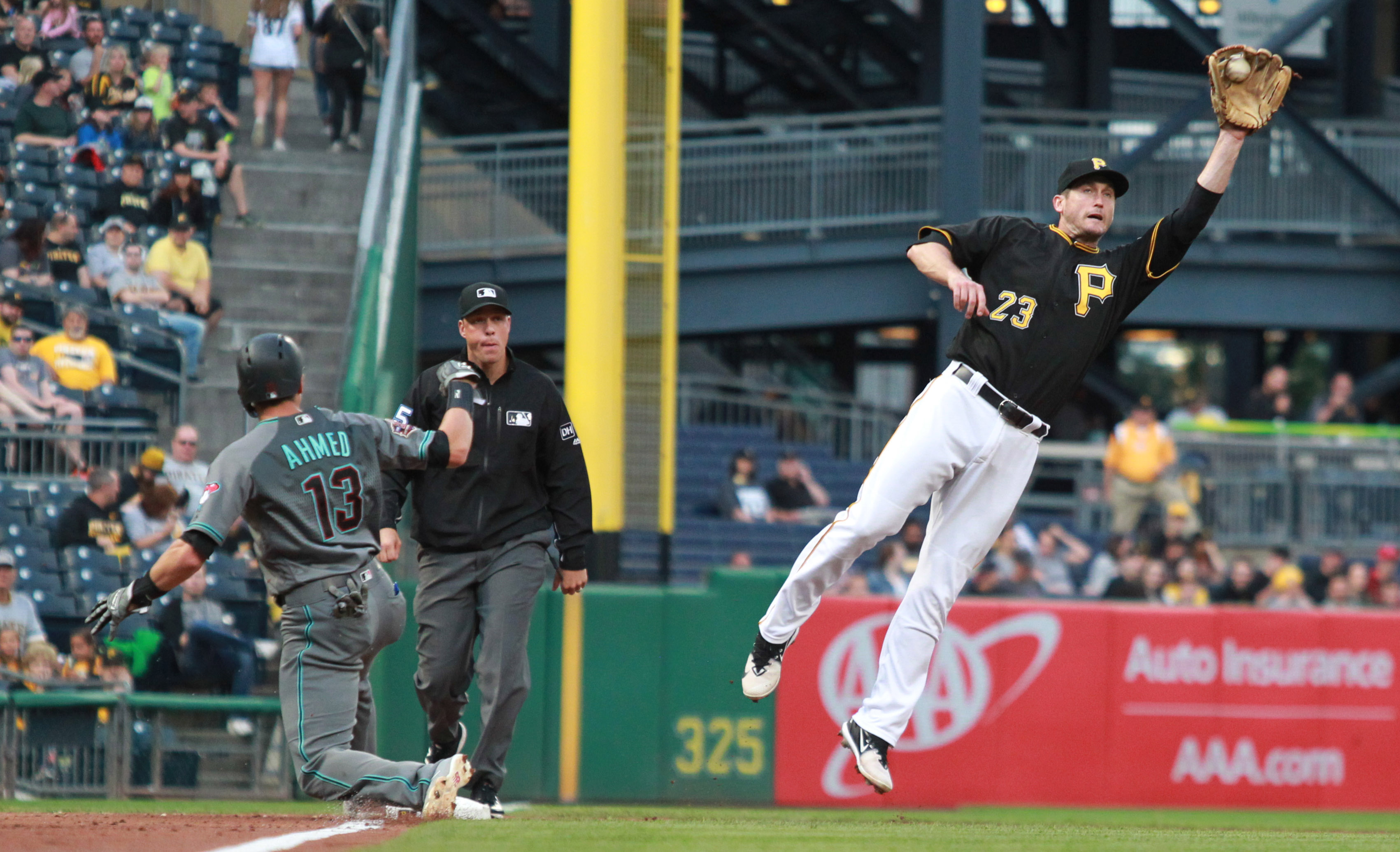 The Pittsburgh Pirates traded Gerrit Cole in exchange for three Major League players and a minor league prospect.  The goal, in the players received at least, was to fill multiple spots with one move.

The Pirates started the offseason with a hole at third base, with Jung Ho Kang still lacking a visa, and David Freese was the incumbent starter.  After three years of posting 1.9, 2.0, and 2.3 WARP from 2015-17, the Pirates decided to keep the now 35-year-old as a bench player and spot starter in a way to keep him fresh.

In order to upgrade both the bullpen and third base, the Pirates traded away Gerrit Cole for Michael Feliz and Colin Moran; along with acquiring Joe Musgrove to fill the hole in the rotation and adding Jason Martin as a prospect.

Moran, a swing changer, looked to have some promise on the surface, especially if the power he showed last year in Triple-A would translate over.  He looked like he could be a big factor in the lineup, especially with the short left field fence at PNC.  At times, Moran has shown off the power, such as on Opening Day or against the Reds on a pitch at his head.

But too often, Moran has not.  Entering games on Thursday, the left-hander was slugging just .402, not something that’s too inspiring, especially since the defense and speed are lacking.

Freese, on the other hand, has once again been consistent, and playing solid defense at third base.  Maybe entering the season the expectations were too high for Moran and too low for Freese.  Here’s the PECOTA pre season projections for both players:

FRAA, or fielding runs above average, projected Moran at -2 runs at third and -1 run at first while being below a league average hitter (.250 TAv).  True Average, TAv, is similar to wOBA in terms of being a linear weight type metric, but it includes strikeouts and situational hitting such as double plays and sac flies.

The above gets back to the Pirates and roster construction.  The Pirates traded away Cole to get Moran and other players.  However, looking to fill three holes, the two holes plus one left by trading Cole, in one trade is hard to do, especially when four of the five players involved were already at the Major League level.

Teams have acted as the though the cost of one win is linear, which I’m not sure it is.  Having one player worth four wins at one position certainly should be worth more to a team than having four players worth one win at four different positions.  There’s a roster constraint, there’s only 25 players that can be on a roster at one time.  Having one player with four wins leaves 24 other players to help supplement the player, where as when dividing up the four wins into four players, that leaves 21 players to add more wins on the roster.

But suppose wins actually were linear, which is how teams have operated in the past.  Using the preseason WARP projections from PECOTA and showing the projected end of season WARP totals (season to date plus projected rest of season) shows:

If the season end projection of the Pirates return matched Cole’s preseason projection, the trade would seem fair – assuming wins are linear, but based on roster construction I’m not sure they are.  Judging Michael Feliz by WARP is shaky because he’s a reliever, WARP is cumulative and Feliz was projected just 54 innings.  WARP doesn’t do relievers justice, they can have added value pitching in high leverage situations, and their WARP on an innings basis might be better to judge them by than raw WARP.

Even then, while Feliz has disappointed, pitching to a 5.45 RA9, though his DRA of 4.98 is more encouraging (still below average).  The Pirates at the time of the trade were worth one less win without Cole than with him.  Making thing more fair, assuming the swing change and power was real, Moran’s 80º percentile projection was a two win player (projected 1.8 WARP).  Musgrove was also only projected 127 innings, a total he would’ve surpassed given his health at the time of the trade.

If Moran reached that projection, the Pirates would be 0.4 wins better at the time of the trade, but again a three win player seems more valuable than 3.3 wins from three players.  I’m excluding future year years because 1). they need discounted, 2). the Pirates always claim they are contending this year, and 3). this was only to illustrate how one player worth X amounts of wins is more valuable than multiple players worth similar a similar amount of wins in a given season.

Getting back to Freese and Moran, the problem with the Pirates right now at the hot corner.  Moran and Freese were projected to be similar players at the start of the season, though the 80º percentile Moran would be a solid player, but that was only going to occur if the swing change and new-found power was going to translate at the Major League level.

Looking at the year to date numbers (entering games Thursday) of each Moran and Freese shows:

This demonstrates Moran’s problem, his value is completely tied to the bat, which his RPA+ (ranks in same order as TAv), has Moran 11 percent above average (111).  Other metrics have Moran more league average, his wRC+ is 98 and OPS+ is 100.  Overall the three metrics have high correlations with each other, and there’s some differences; the big one here is TAv factors in strikeouts and situational hitting,  Moran has only hit into a double play in 8.6 percent of double play opportunities (his NETDP of -1.03 shows he’s hit into one double play less than the average player with same number of opportunities).

Nonetheless, if you want to call Moran a league average bat, I wouldn’t argue against it.  Similarly, though, David Freese has been average.  His .263 TAv (scaled so .260 is average), 101 wRC+, and 102 OPS+ have him as a league average hitter.  The player that was replacing Freese has hit similar to Freese while playing worse defense and being a worse base runner (-2.8 BRR to 0.2).

But maybe there’s more in Moran going forward this season.  Here’s the rest of season projections from Baseball Prospectus:

Moran and Freese project as essentially the same offensive players they did at the start of the season, which makes sense.  The projections include year to date numbers and they do have weight, but 90 games through a season shouldn’t significantly change them.

Moran projects to be a replacement player rest of season, same with Freese, but Freese is projected to have half the plate appearances as Moran, while being 1.3 runs better defensively (subtracted projected season end totals to current totals for projected rest of season).

And this demonstrates the Pirates biggest problem.  With both players being projected similar players offensively, the boost Freese gives defensively is important.  The two have even hit similarly and given similar total value in as of date numbers, but Freese has done so in far less plate appearances.

Neal Huntington always talks about how these are Major League games and they are all important and count.  If they insist on winning this year, the team’s playoff odds entering Thursday is just 1.0 percent, maybe Freese is the better play this season.  But insisting on winning this year makes the Cole and McCutchen trades more questionable considering how valuable having six wins in two players can be.

But with the Pirates odds of making the playoffs being so slim, Colin Moran needs the reps both offensively and defensively, and that includes playing against left-handed pitching, which means playing Freese sparingly.  Going forward, Moran is the starting third baseman, unless Ke’Bryan Hayes keeps developing.

The way Freese and Moran have played on the field, and the way in which they’re used in the lineup, is another demonstration of the Pirates being half in and half out.  Win now, keeping Cole and starting Freese would’ve made the most sense based on the preseason projections.  Playing and developing to compete in 2019 and 2020 means Moran should be starting everyday, and against left-handed pitching.