The events that made Dwight Howard a Washington Wizard 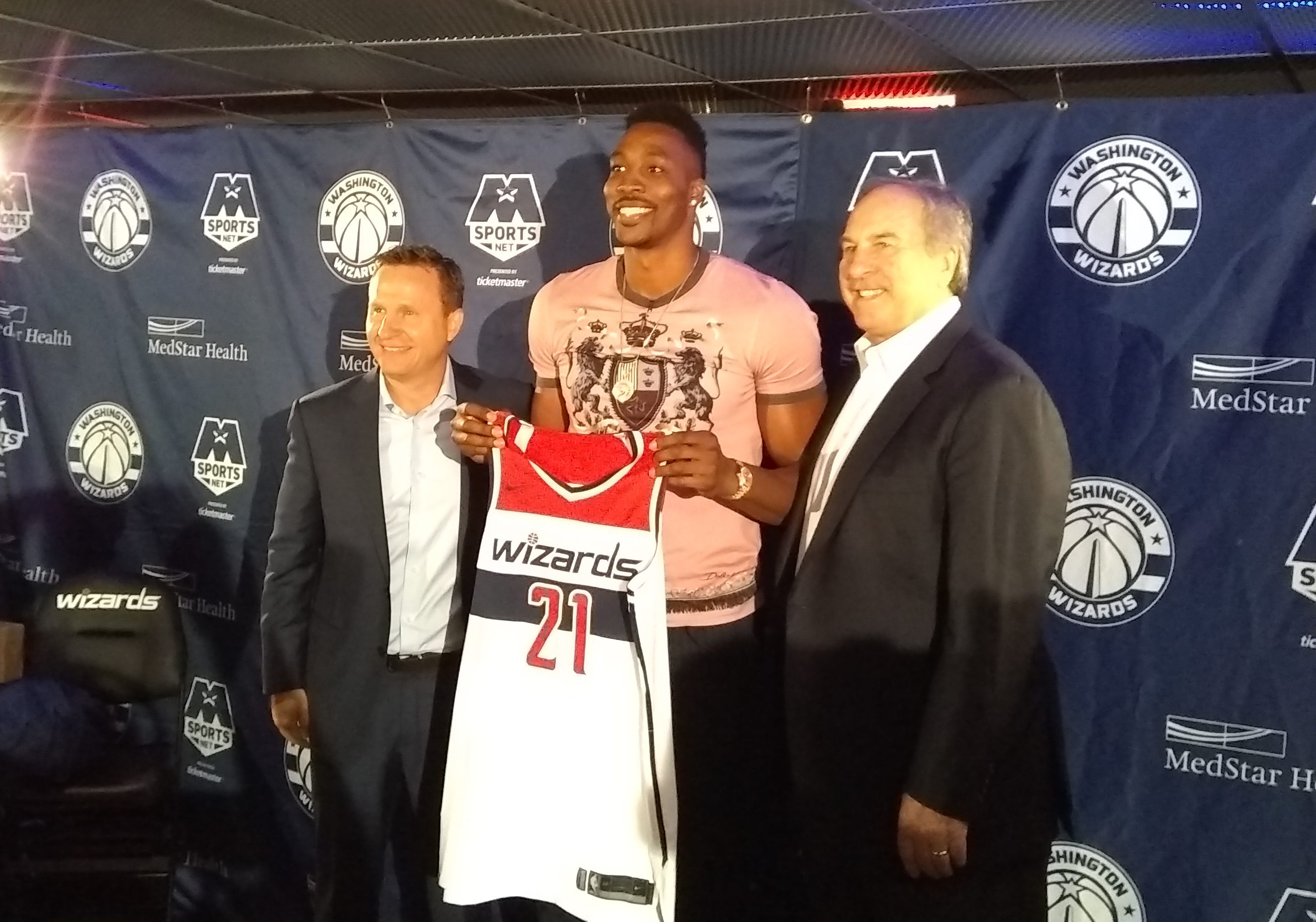 The events that made Dwight Howard a Washington Wizard

Despite having no money to sign a player with traditional salary cap space, the Washington Wizards have made sizeable splashes in the NBA offseason. Before free agency, Washington acquired Austin Rivers in a trade that helped mend locker room relations with the removal of Marcin Gortat and more recently they have signed potential Hall of Famer Dwight Howard to fill Gortat’s spot.

On Monday, the Wizards paraded their new center around Capital One Arena in a meet and greet with season ticket holders and an introductory press conference joined by head coach Scott Brooks and team president Ernie Grunfeld. Howard signed a two-year, $11 million deal with the taxpayer mid-level exception with a player option for 2019-20 and reports are that he wants to rebuild his image in the NBA although he believes that he should not need to.

On April 10, 2018, Dwight Howard completed his 14th season in the NBA after game No. 82 of the regular season with the Charlotte Hornets who did not qualify for the playoffs. Little did Howard know, despite averaging 16.6 points and 12.5 rebounds, that he would be shipped out for the second year in a row as he was caught off guard when being traded to the Brooklyn Nets.

“It caught me off guard,” Howard remembered. “I literally was about to walk into an event where I was about to speak to about 5,000 people and I looked at my phone and on Instagram, I see a message that says, ‘Welcome to Brooklyn.’ And so I’m like, nah, this can’t be real. Like, not again. It really hurt because being in Charlotte, I really tried to do whatever I can to embrace that city, embrace that team. I just started to do some great things in Charlotte. I had opened up my own Boys & Girls Club center there.”

As anyone could understand, Howard was stung that he learned of his unexpected trade through social media, but it also played an important role in him arriving in D.C. Once it became known that the Nets would negotiate a buyout and the eight-time All-Star would become a free agent, John Wall reached out to recruit Superman.

“He just said, ‘do you want to come to D.C.?,’” Howard recounted. “There wasn’t too much to be said. As he said that I was like, ‘bro, I’m with it.’ That conversation was like a confirmation for me. Just him reaching out was like man, I’ve never had a guy like John Wall as a point guard. So why lose that opportunity? Especially when we’re both at points in our career where it’s only about one thing. I was all in.”

It is not rare for players to communicate with each other and try to sway a free agent’s decision on where to land. Most would just assume it is through text messaging, but the power of Instagram, which Wall and Howard use religiously, was the real method of communication. You could say Wall successfully slid into Howard’s DMs (yes, I know that is corny).

“No disrespect to any of the point guards that I’ve played with in my career, John is a different type of animal,”

“It was just John and he reached out to me on Instagram at first,” Howard explained. “[He] sent me a message on Instagram. And no lie, when I saw the message, on Instagram, I really got so happy. I was like, ‘oh, John just DM’ed me. Oh man, John DM’ed. This is crazy.’ [in kid on Christmas voice].”

For the 32-year old, Wall represents the best point guard he will get to play with in the NBA thus far in his career and Howard is not shy from letting that be known.

“No disrespect to any of the point guards that I’ve played with in my career, John is a different type of animal,” Howard said. “The way he passes the ball, the way he draws so much attention with his aggressiveness on the offensive end is going to make it very difficult for teams to really guard the pick-and-roll. And at this point in John’s career, it’s about one thing and that’s winning.”

Once Wall first hinted at the idea of Howard signing in Washington, the three-time Defensive Player of the Year allowed his mind to wonder of how he could fit in. In the LeBron James-less East, there is certainly an opening for Howard to return to the Finals.

“And after that [Wall reaching out], I really just started putting on my thinking cap,” Howard explained, “‘How could I be the most effective with this team and how can we as a team be the most effective in the East and in the NBA.’ I just thought of all the possibilities. ‘Man, this could be the best spot for me.’ With John as the point guard, Bradley as the two guard, how he shoots the ball, how he’s going to keep the floor spaced. Otto Porter who shot, last two years, the three-ball great. We got a guy like Kelly who’s young, plays with a lot of intensity, pass the ball well. Satoransky, I liked him when we played against them last year, ‘man, this guy can really pass the ball, he can really shoot, he plays with a lot of energy.’ I can just go down the list of every guy on the team, I was like ‘man, this would be a perfect opportunity, the perfect fit for myself.’ There was no other decision to be made.”

One might think that Washington had to throw in a player option to entice Howard away from other possible suitors, but he was already committed to becoming a Wizard. “That was something that my agent worked on,” Howard answered. “I just wanted to be here, that was my focus. I didn’t care about nothing else but to make sure I got to D.C.”

Howard even revealed that there was interest from the defending champion Warriors, but he chose the Wizards instead. (Take that Kevin Durant and DeMarcus Cousins!) “Golden State called, I really thought about them, but once John sent me that message, I was like man, I couldn’t tell him at first, ‘I’m going to be a Wizard’ and that was my mindset,” Howard said.

The Atlanta native already has some acquaintances in the DMV that may have been the cherry on top of the sundae in his decision to bring his talents to Washington. “I know I have a lot of friends out here in D.C. and they’ve been asking me about D.C for the longest,” Howard shared. “To finally be here, it feels like home. I’m looking forward to it.”

After a 14 year journey with many spots, Dwight Howard is now a Washington Wizards: “I started with the Magic. I learned Magic for eight years. Traveled to La La Land. Learned how to work with Rockets. And then I learned to fly with some Hawks. Got stung by the Hornets. Through all of that, it’s taught me how to be a Wizard.”