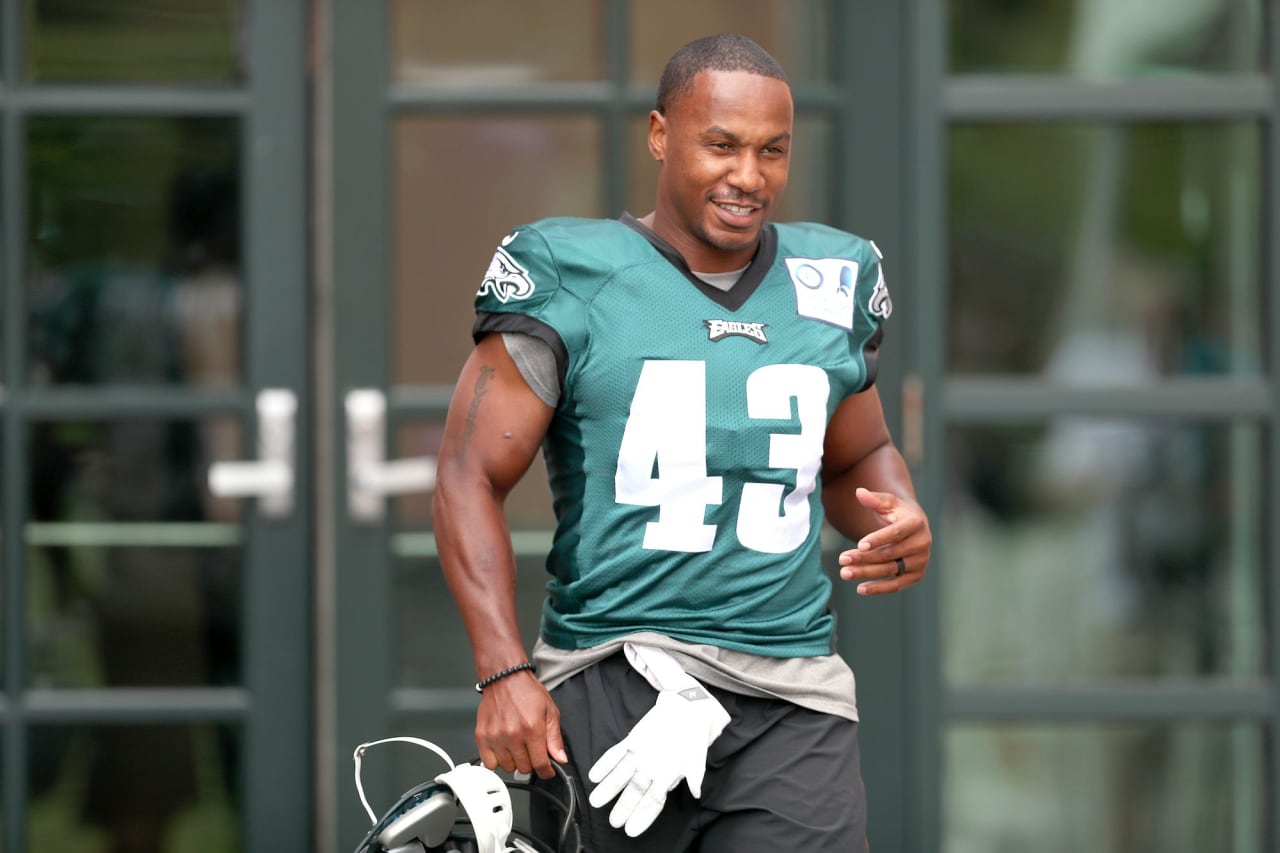 Fran’s a Temple guy, so I tend to defer to his judgement…

“It was great to see so many new or, more importantly, returning faces back on the field at the NovaCare Complex. For me, in particular, Darren Sproles’ return was great to see. Early on during walk-through, No. 43 busted out a long run, and while there was no defense on the field, just to see him out with the team was a sight for sore eyes.”

“The offense took the field to begin the 10-10-10 practice. After two good runs from running back Jay Ajayi, we got to see a pair of throws from Nick Foles. The first fell incomplete, intended for Zach Ertz down the left sideline after the veteran tight end beat De’Vante Bausby, but on the next play the Super Bowl MVP hit Mack Hollins right between the numbers for a would-be first down.”

“Defensive tackle Elijah Qualls, who was seemingly pretty active throughout the day, nearly broke up a screen pass before it even got started. The second-year player knifed into the backfield just as Carson Wentz faked a handoff to Sproles before quickly dishing the ball out. With the injuries along the defensive line, the former sixth-round pick has a real shot to contribute this fall.”

“Carson Wentz’s first completion of 2018 came courtesy of rookie tight end Dallas Goedert, who was used in a number of different ways on Thursday. The second-round pick lined up in the slot, out wide, and on the line of scrimmage, showing his versatility. He ran a quick route to the right flat on this play, and Wentz hit him in stride.”

“In the first defensive session, I was really excited to see the personnel in the secondary.  I was excited just seeing Sidney Jones inside. Talking with some of the other media members in attendance, who asked why Jones would make more sense inside as opposed to someone like Darby, I explained that with his size and physicality, Jones will be able to hold up a bit better in traffic against the run. I’m sure the rotation will be different on Friday, but it will be fun to follow all summer long.”

“On the fourth play for the defense, Chris Long dipped outside and got home for what would have been a sack. On the following play, Michael Bennett lined up in the same spot and looped inside for a pressure and forced incomplete pass. Both of these plays came off of four-man rushes, but Jim Schwartz was not bashful with his unit’s defensive looks and exotic schemes on Thursday. I’m excited to see this group in its third year under Schwartz and this coaching staff as they unpeel even more layers to the scheme.”

“Donnel Pumphrey ripped off a couple of long runs on Thursday, including one on the seventh defensive snap. This will be a big camp for the former fourth-round pick as he tries to stake his claim for a spot on the back end of the depth chart in a crowded backfield.”

“Speaking of the crowded backfield, as we transitioned to a special teams portion of practice, my eyes transitioned to someone Pumphrey will be competing with over the next few weeks, Wendell Smallwood. The young veteran was one of just two offensive players lining up with the first-team “punt” unit for the Eagles on Thursday (the other was Corey Clement). Smallwood will need to prove himself in the third phase of the game. Seeing him out there with the first team was certainly a good start.”

“I mentioned the versatility Goedert showed throughout the day….Goedert lined up by himself on the outside, matched up on defensive back D.J. Killings. Wentz went to the rookie on a slant route, and he almost came up with a big catch, but Killings was able to break on the throw and get the ball on the ground. Killings is competing for a spot in a tough Eagles secondary.”

“The defense returned to the field and Sidney Jones was the target of the first pass from Carson Wentz. It was a deep fade route to the slot receiver, Markus Wheaton, and Jones was step for step with the veteran and prevented the completion.”

“It was clear multiple tight end sets will still be a focal point in the offense. The Eagles practiced several two TE sets – with a variety of tight end combinations and formations.”

“Michael Bennett and Josh Sweat were playing as the second-team defensive ends behind starters Chris Long and Derek Barnett.”

“With the loss of Patrick Robinson in free agency, the nickel position is seeing some new faces. Sidney Jones served as the starting nickel, D.J. Killings on the second team, and rookie Avante Maddox on the third string.”

“A popular defensive group today was the big nickel (3 safeties) – featuring Malcolm Jenkins, Rodney McCleod, and Tre Sullivan. In this group, Jenkins would roll down to the line of scrimmage while McCleod and Sullivan played deep.”

“Jeremy Reaves had a highlight interception today in the flat after quarterback Nate Sudfeld made a late throw. Sudfeld was nearly picked off on the play earlier by Jalen Mills.”

“With Tim Jernigan on the Non-Football Injury list and 2017 backup Beau Allen gone in free agency, the battles and depth at the 1-tech defensive tackle position will be one to watch. Destiny Vaeao was the starting defensive tackle adjacent to Fletcher Cox. Haloti Ngata played several reps with the second-team unit.”

“In one particular empty formation, rookie running back Josh Adams, who practiced for the first time after missing all of the spring with a foot injury, was split outside the numbers and blew past veteran linebacker Nigel Bradham on a vertical route. The ball went elsewhere, but you were able to see the speed and strides of the high cut 6-2 running back who clocked a 4.48 40 yard dash at his Pro Day in the spring.”

“Later in the session, the Eagles’ defense put in their three defensive end pass-rush unit – something they used often in 2017. Chris Long and Derek Barnett occupied the end positions while Michael Bennett aligned inside with defensive tackle Fletcher Cox.”

There you have it, Day 1 of the Eagles’ 2018 season as reported by Fran Duffy. As Brizer would say, you miss a little and you miss a lot…or sumlin like that.

Amazingly we are less than one week away from the first preseason game of the year, the Hall of Fame Game in Canton. That will be the Ravens vs. Da Bears. Both teams have a one-week’s headstart on the Eagles in terms of training camp. In honor of Mick Jagger’s 75th birthday, my reaction is “Time Is On Our Side”…