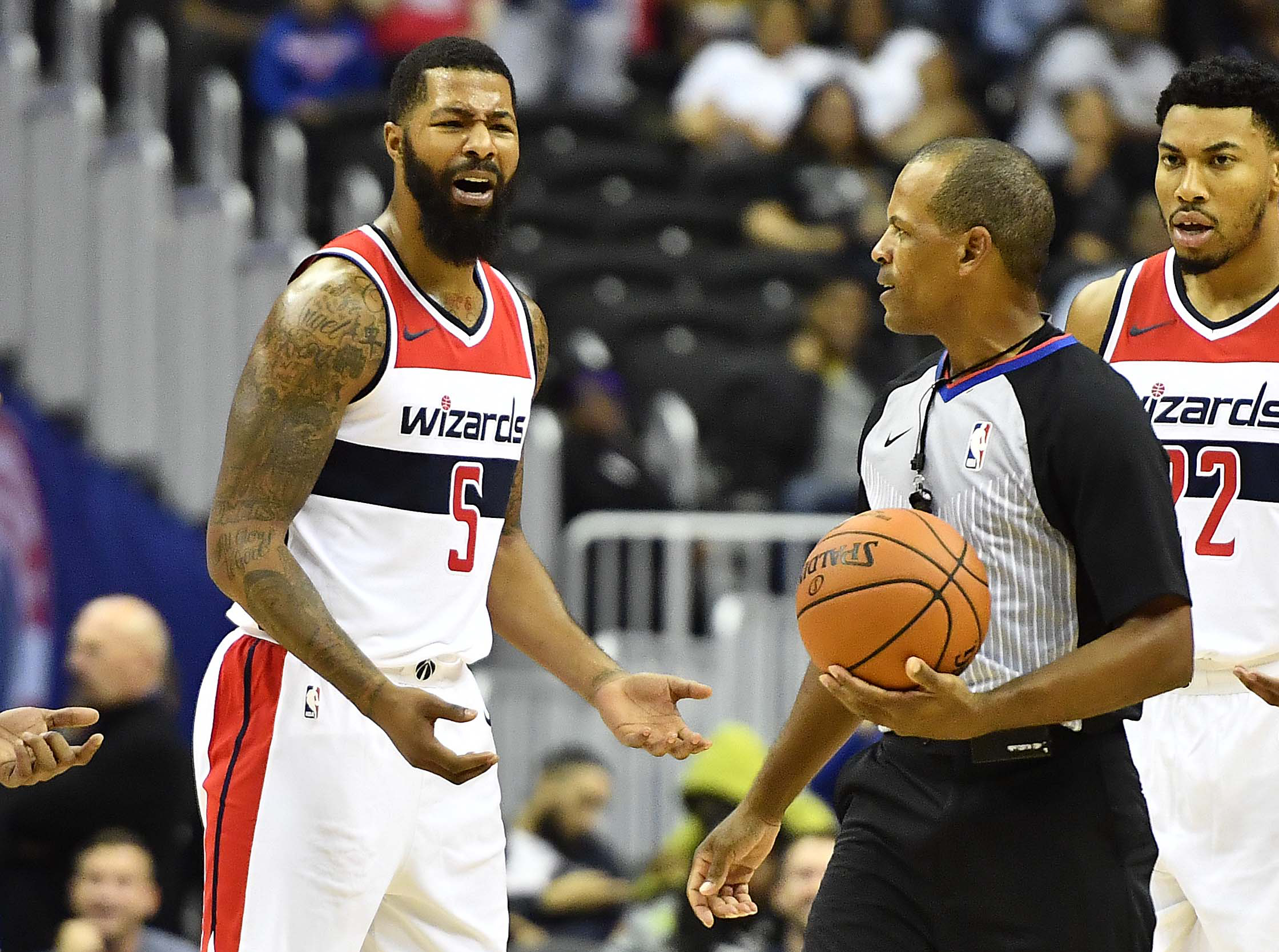 Training camp is over and an official NBA basketball game was played in the nation’s capital for the first time in nearly five months when the Washington Wizards were bounced in the first round of the 2018 playoffs. In a dreaded overtime game for a meaningless preseason result, the Wizards youngsters fell short in the extra session. There were 15 lead changes and 18 ties during the game with the Knicks. There were also constant whistles with 83 personal fouls called and five technicals. Here are the three takeaways from the preseason opener.

John Wall has a reputation for picking up technical fouls because he expresses his displeasure in officiating from time to time as he faces more than his fair share of contact without equal free throw rewards. Tonight, it was the usually mild-mannered Bradley Beal who was furious with official Evan Scott for not giving the All-Star shooting guard a trip to the free throw line after he was hacked on a drive to the hoop. Beal was so heated that he slowly walked back on defense with the ball still live and went straight to Scott to express his disapproval. The 25-year old was soon thereafter given a technical foul and nearly drew a second minutes later when he was called for a delay of game violation for tossing the ball aside. Beal was frustrated for much of the game as he finished with just 11 points on 3-for-12 shooting including 1-for-7 from deep in 22 minutes of play.

Two game minutes later in the second quarter and it was Markieff Morris who was causing fireworks. After an Emmanuel Mudiay missed free throw, the veteran and Knicks rookie Mitchell Robinson stood face-to-face near half court as neither backed down. The referees would intervene and nothing seemed to escalate after the initial forehead bumping leading to double technicals. Seconds later and Morris was assessed another technical foul and ejected from the game by Eric Lewis. The power forward pled innocent when asked what led to the second technical and ejection. This is Morris’ seventh ejection since joining Washington in 2016 and this one could carry another hefty fine given he had some choice words for Lewis as he was walking off of the floor.

Forgive the rookie…he's new to this sh*t. Keef ain't about that nonsense. #DCFamily is back. pic.twitter.com/ahexj16xSg

Scott Brooks was not a happy camper by these occurrences stating after the game that, “it’s not good, it’s not a good look.” He said that his team needs to keep their composure better and not let their emotions get out of control. Morris respects that and understood where his coach was coming from, but felt that he had to do what needed to be done.

“Nothing. I don’t know what the fuck happened,” Morris said about the ejection. “He a stupid ass rookie, talking too much. Obviously, I didn’t like what he said. The refs overplayed it. They threw me out. … What he said crossed the line as a man and I wasn’t feeling it. … I’m not gonna say [what he said]. It was bad enough for me to do what I did when it had nothing to do with the play. … I don’t even know him. I’ve never even seen him before. He just checked in the game. I never even guarded him. I didn’t even know there was a Mitchell on their team. I didn’t even know anything about it.”

Markieff Morris on what led to his ejection: "Nothing. I don't know what the fuck happened."

On confrontation with Mitchell Robinson: "He a stupid ass rookie, talking too much." pic.twitter.com/sxCZVqcmc6

When the Wizards acquired Austin Rivers from the Los Angeles Clippers for Marcin Gortat, they were able to bring an element that this team has been lacking recently: a legitimate scorer off the bench that can create his own shot. We are quickly learning that Rivers will have a role much larger than just a bench player as there will be times where he is playing alongside John Wall, Bradley Beal, or both. This lineup also has the potential to be the one that finishes games alongside Otto Porter and a big.

For a short 73 seconds towards the end of the first quarter, partly because Wall was on a semi-minutes restriction that meant he only played nine minutes, the trio of guards shared the court. There is no way to extrapolate from such a small sample size, but Washington outscored New York 5-3 during that stretch highlighted by a Wall and-1.

Late in the fourth quarter and for all of overtime, it was the lineup of Chasson Randle, Jordan McRae, Troy Brown Jr., Devin Robinson, and Thomas Bryant that was on the court. Washington had chances to win the game during the end of regular and tie during the end of overtime, but McRae fumbled away the possession and Bryant hit the back of the rim on a potentially game-tying three-pointer. McRae was a bright spot, and caught the eye of Rivers, with 14 points on 5-for-5 shooting in 13 minutes. Robinson had some bounce with nine points on 4-for-5 shooting. Brown was just 2-for-9 for the field and Bryant missed all four of his shots, but they contributed seven and five rebounds, respectively.

Two-way players Robinson and McRae will be spending a lot of time with the Capital City Go-Go as might Bryant and maybe Brown since playing time will be hard to come by with the Wizards. McRae as well as other members of the training camp roster Lavoy Allen, Chris Chiozza, and Tiwian Kendley my help round out the roster. Both general manager Pops Mensah-Bonsu and head coach Jarrell Christian were in the building to take in the preseason opener as they get ready to finalize their roster at 10, not including Robinson and McRae, ahead of next month’s start of the G League season.

Up Next: Washington will have a few days of practice at their new facility in Southeast D.C. before taking on the Miami Heat, their regular season opener opponent, on Friday night from Capital One Arena.