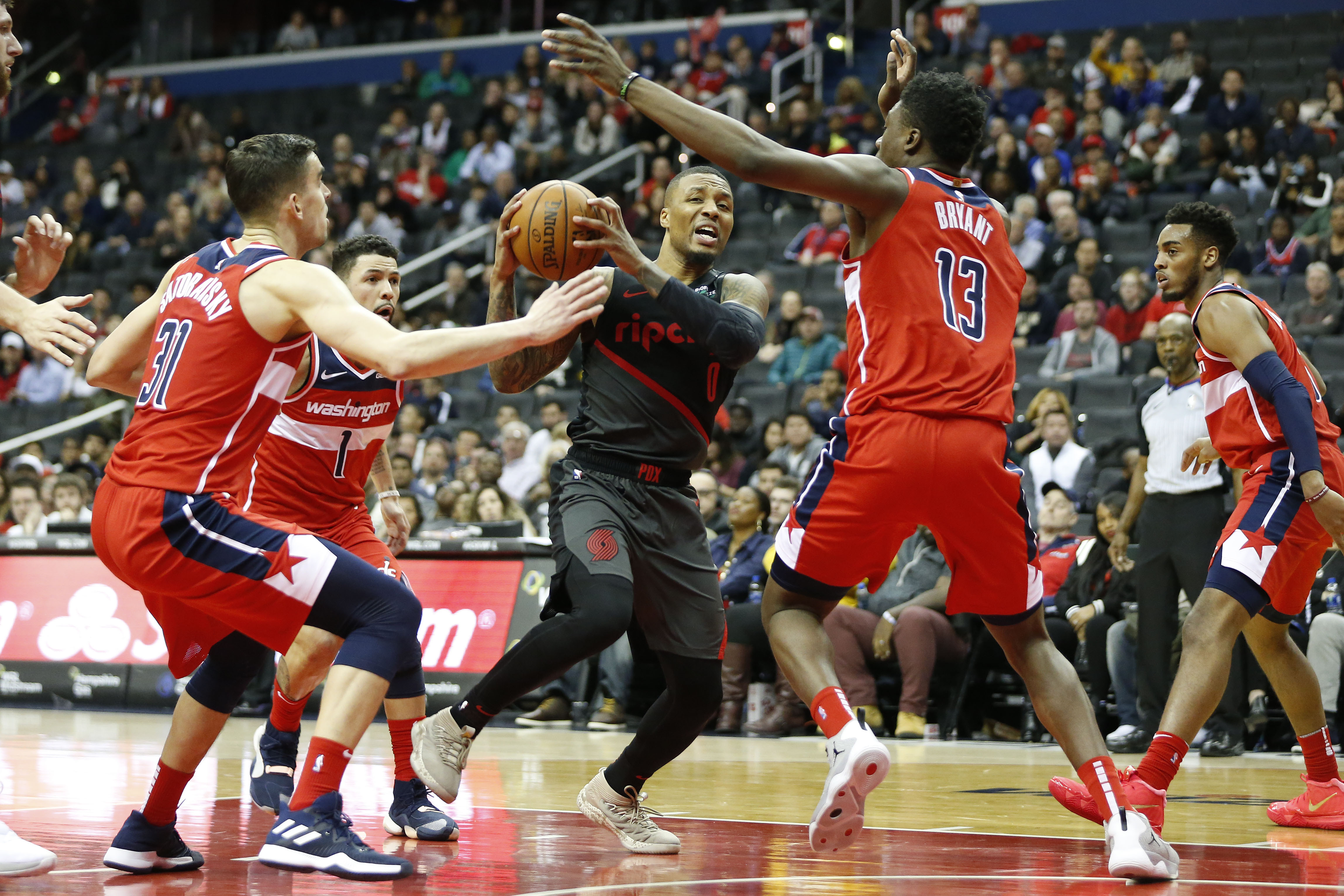 Two steps forward and one step back seems to be the name of the game for the Washington Wizards this season. They seemed to be making progress after three consecutive wins over Miami, Orlando, and Cleveland before losing to Brooklyn without Caris LeVert and laying an egg against Portland. In the midst of a tough stretch of games, the Wizards continue to dig themselves a deeper and deeper hole that might just lead to a lottery selection soon enough.

In some of Washington’s losses this season, they got off to good starts only to falter later. That was the case against Oklahoma City at home and Orlando on the road. Against Portland, the Wizards allowed them to take a 32-12 lead just eight minutes into the game. It was the same recipe of disaster, the Wizards on-ball defense was bad leading to weak side defenders leaving shooters to help and the opponent making the home team pay. The Blazers made seven three-pointers in the first quarter alone. To put it simply and to summarize Scott Brook post game, the starters did not play with the effort that is expected of an NBA team and such behavior, which consistently happens with this team, is unacceptable. Brooks has threatened changes before that he has pretty much never followed through with, but something has to be done to wake his team up. The entire starting unit from Wall to Beal to Porter to Morris to Howard is not giving enough effort. Maybe Howard gets a slight pass because he is not healthy, but the rest have zero excuse and need hold themselves accountable. Howard exited the game after just seven minutes of play with a reaggravation of his piriformis injury that was bothering him before tip off.

In the fourth quarter, Washington won the frame 39-28. It was not classic garbage time even though Portland finished the third quarter up 21 because the road team actually played their starters for the majority of the quarter. On the other hand, it was Tomas Satoransky, Austin Rivers, Troy Brown, Kelly Oubre, and Jason Smith/Thomas Bryant that put a dent into the sizeable deficit. In the final quarter alone, the bench was +56, while Portland’s duo of Damian Lillard and CJ McCollum were -21 in 19 minutes combined. Washington shot 65.2 percent from the field in the quarter and held Lillard to 0-of-6 after the All-Star had 36 points on 12-of-23 shooting through the first three quarters including 18 in the third alone. Even though they were trailing immensely with next to no shot at completing the comeback, the reserves (and not just the ordinary second unit as Brown and Bryant typically do not get playing time) showed an enthusiasm to be on the court that the starters lack.

If you ask any of the players why the Wizards are struggling the way they are right now or why they do not consistently play with the effort that Brooks demands, they will say some version of, “I don’t know.” Jeff Green and Austin Rivers said that after the loss to the Blazers. Wall and Beal have used that line before. Rivers speaks his mind, which is appreciated, and you could just feel the level of frustration he was enduring when he chatted with the media. He is frustrated that this team is talented, yet does not live up to it. He is frustrated by the ‘you have to stay the course’ idea because he wants to know when it will finally turnaround. Bradley Beal mentioned at Media Day that he was thankful that Ted Leonsis did not break up the Wizards’ core but allowed them another chance this season. Remember such, I asked Beal and Wall if they thought a shakeup may be needed.

“I have no idea,” Beal said to be politically correct. “I have no idea. All I can do is my job and just like everybody else, and just come in and try to get better every day. At the end of the day, that’s Ted’s [Leonsis] job, Ernie’s [Grunfeld] job to make those decisions, tough decisions, if they’re necessary. We rock with what we got. Coach rolled with who was riding and who was playing hard at the end of the game tonight too.”

“I don’t think so,” Wall said. “We still figure it out. We play a little bit with Dwight [Howard]. Dwight got out and trying to figure out what guys get rotation, what guys get minutes. At the same time, it doesn’t matter what time, how many minutes you get, how long you get to be on the floor. If you’re out there for 30 seconds, you need to compete for those 30 seconds. That’s the key of the game, which is giving effort from both ends of the floor and let the game dictate what it’s going to do.”

Next Game: Marcin Gortat and Mike Scott make their return to Capital One Arena on Tuesday as the Clippers will look to sweep the season series against the Wizards.