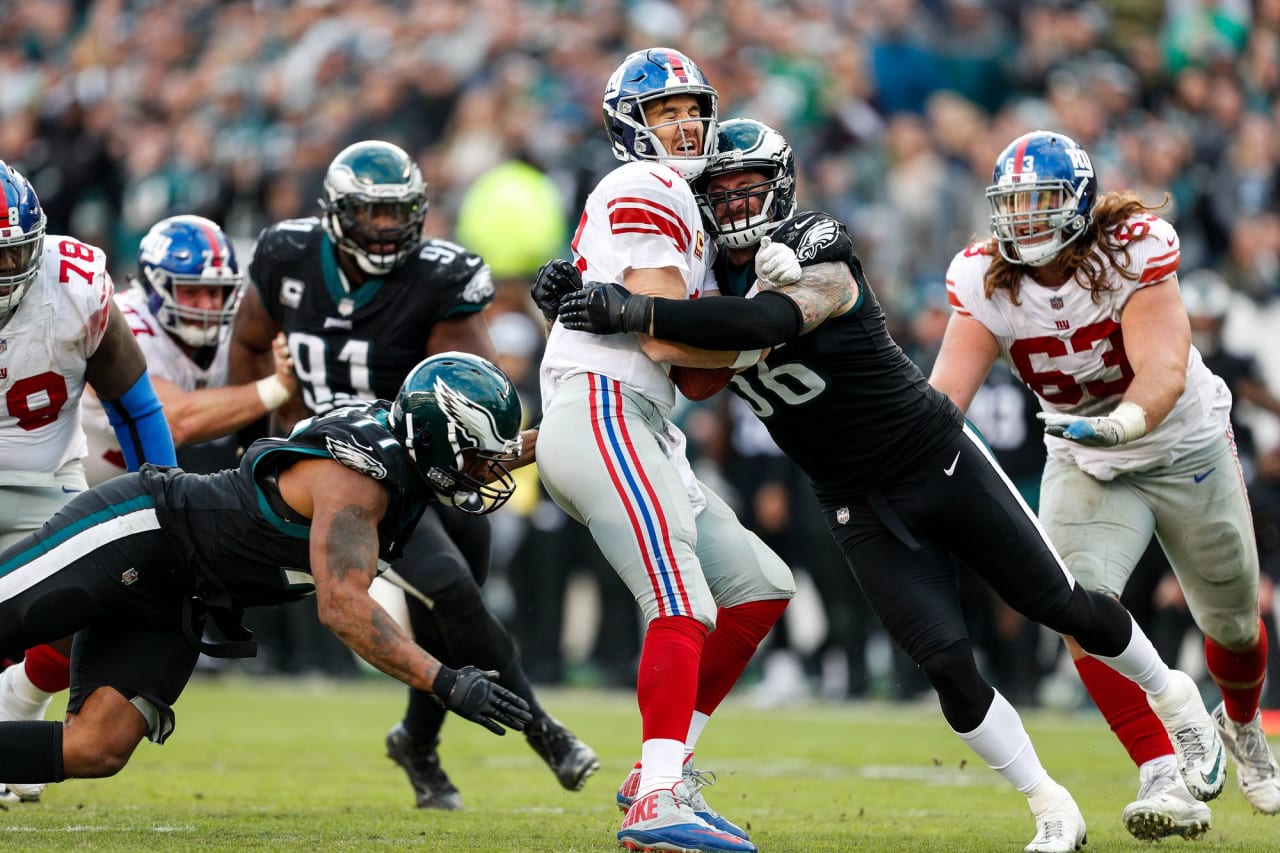 EYE will take the win, thank you very much. But I curb my enthusiasm with the knowledge that Pat Shurmur befuddled not only his own team but also me by resting Saquon Barkley the majority of the 2nd half.

Maybe Saquon was dinged up and we didn’t know it? Maybe Shurmur was saving him for their continued win streak, assuming he had this one in the bag? I can’t even fathom Saquon was being disciplined for some reason. These are all questions for the New York media to feast upon today.

Ya see, Saquon was killing us with mind-numbing regularity in the first half. For some reason, Shurmur went away from him and put the game in Eli Manning’s hands as a (gulp!) protector of the lead.

The Eagles played like narcoleptics for most of the first half. Sleep-walking on defense and punch-drunk on offense—until an extremely angry Malcolm Jenkins took charge and made a brilliant Ed Reed-type coverage play on a deep route for an INT that changed the game.

In the end, Jake Elliott kicked a 43-yard field goal with 22 seconds remaining, and the Philadelphia Eagles rallied for a 25-22 victory over the New York Giants on Sunday.

The defending Super Bowl champions trailed 12-0 early and were down 19-14 in the fourth quarter before Carson Wentz made key throws and undrafted rookie Josh Adams delivered big runs.

Josh Adams. He will never be compared to Bo Jackson or even Saquon Barkley. He reminds me more of Forrest Gump or Dick Van Dyke with his running style. But the sonofagun has heart and reads his blocks.

Adams scored on a 1-yard touchdown run and ran up the middle for the 2-point conversion to put Philadelphia ahead 22-19.

After the Giants tied it on Aldrick Rosas‘ third field goal, a 29-yarder, the Eagles controlled the ball for 5:27.

Coach Doug Pederson went for a fourth-and-1 at the Giants 42 and Wentz completed a 12-yard pass to Nelson Agholor right before the two-minute warning. Adams ran three times and Elliott made the go-ahead kick.

The Giants started at their own 34 with 16 seconds left but couldn’t do much.

The Eagles (5-6) stayed in the mix in a mediocre NFC East. The Cowboys and Redskins are tied for first place at 6-5. The Giants fell to 3-8.

In the first half, Eli Manning picked apart an injury-depleted Eagles defense that was missing its top four cornerbacks, a starting safety and starting linebacker. But Manning threw an interception to Malcolm Jenkins at the Eagles 2 before the second quarter ended.

Saquon Barkley had 101 yards rushing for New York, and Odell Beckham Jr. caught “only” five passes for 85 yards against our stumbling backups, when all was said and done. But most of that was concentrated in the first half, when the G-Men had us on the ropes.

The Eagles relied on their little-used rushing attack to take the lead in the fourth quarter. Wentz tossed a 23-yard screen pass to Corey Clement and the next six plays were runs, capped by Adams’ score.

Adams had a career-best 84 yards on 22 carries.

After Barkley broke loose up the middle for a 51-yard TD to give the Giants a 19-3 lead, the Eagles finally answered.

Wentz fired a 15-yard TD pass to Zach Ertz and flipped the ball to Clement on an option play for the 2-point conversion, cutting the deficit to 19-11 late in the second quarter.

The Eagles finally stepped up on defense, forcing three straight punts in the second half to allow the offense to rally—but again, what was Pat Shurmur thinking in pulling Saquon out of the game?

Coming off the most lopsided loss by a defending champion — 48-7 at New Orleans — the Eagles fell behind early again. The Giants jumped ahead 6-0 on the opening drive. Manning flipped a 13-yard TD pass to Barkley, but the 2-point conversion failed after a penalty on the Eagles allowed the Giants to go for it from the 1.

The Eagles appeared to tie it on a 52-yard TD run by Adams but a holding penalty on center Jason Kelce negated the score.

The Eagles were scoreless in the first quarter for the fifth straight game and ninth time this season. They only have 21 points in the opening quarter for the season. We got away with it this time, but that recipe will not work again the rest of the way—because Pat Shurmur will not be making the opponents’ halftime adjustments.