Is there a Brandon Ingram trade out there? 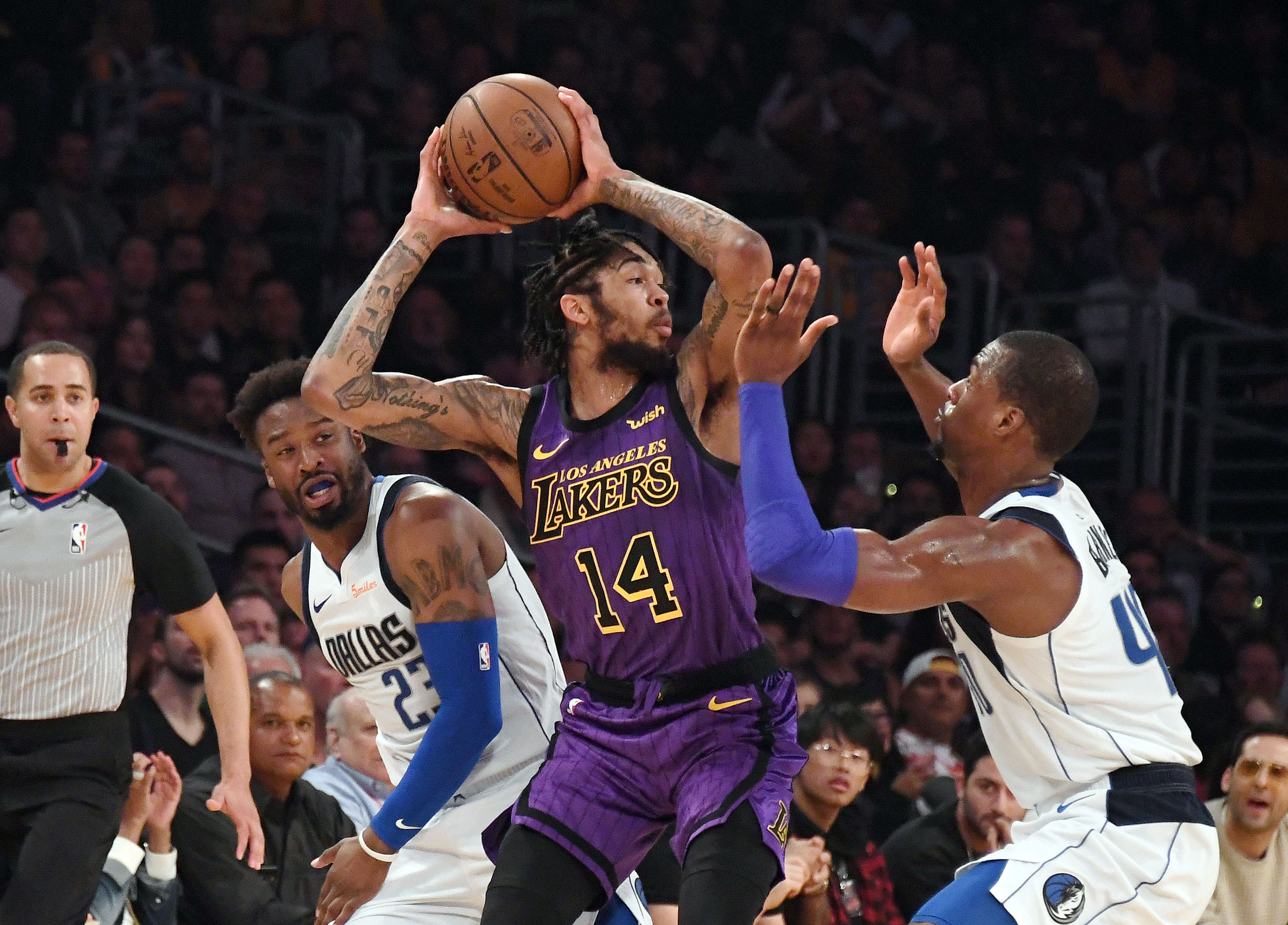 Is there a Brandon Ingram trade out there?

The latest Bleacher Report article from Eric Pincus provided some juicy insight regarding Brandon Ingram’s fit with the Lakers, as well as his long term future with the team.

After talking to some NBA executives around the League, Pincus learned that Ingram may not be as good of a fit next to LeBron as some had thought he would be. A deep dive into the numbers is not needed to see that Ingram is struggling to adapt to life with Lebron, especially when comparing him to teammates Josh Hart, Kyle Kuzma and even the reinvigorated Lonzo Ball.

This is not to say Ingram is a bust, however. Across the board, his game made a significant leap from his rookie to sophomore year. See so for yourself below.

Frustratingly, those numbers have regressed this year. Is it indicative of Ingram’s talent level? No. His potential is still clear to see, as scouts salivated over the playmaking ability he displayed while Ball was out of the lineup last year. His field goal percentages made a large jump as well.

At the end of the day, however, Ingram does not look like a great fit next to The King. A good fit, perhaps, but not a great one. With Los Angeles in win-now mode, this is not something they can settle for.

The executives in the article also discussed the prospects of Ingram being traded. They postured that if Ingram were to be moved (a reasonable scenario) then he would likely be traded this offseason. If L.A swings and misses in free agency, they will need to trade for a star and Ingram would almost certainly be in the package. If they land a second star, say, Kawhi Leonard, then Ingram could be packaged to bring in someone like Bradley Beal (more on him later.)

The prospect of Ingram on a team more conducive to his growth is almost as tantalizing as the prospect of landing another star next to LeBron. But where would Ingram go? Is there even a trade out there for him right now? Let’s go through the list of potential suitors.

The “not trading him to a competitor” teams

I pondered the idea of swapping Ingram for Eric Gordon. Houston looks like it missed its one-year window and needs a slight shakeup. Gordon is a sniper, but having a down year from three. Regardless, these teams are not going to help each other out. Daryl Morey in Houston may be enticed by the idea of landing a guy with a high ceiling like Ingram, but this idea is out for now.

Portland is having a successful season after its disappointing first round exit in 2017-18. They look like they are going to give it one more go with their current squad before truly thinking about making roster moves. This is a team to keep an eye on after this season, however. Ingram could be packaged with another player to land C.J McCollum or even Damian Lillard.

Of course, Danny Ainge is always looking to add talent. There isn’t a reasonable trade to be made, however. Cleveland has nothing to give. Chicago would be interested, but what assets could feasibly help LeBron win right away? Orlando is another team that would love to be Ingram’s fresh start place, but they don’t have a star level wing to send back. Not much here, folks, at least not now.

The “I’m listening, but what’s in it for me” teams

I tossed around the idea of a Justise Winslow for Ingram trade. Winslow has turned into a nice catch and shoot 3-point player, hitting 38 percent of his 3.8 attempts per game, plays excellent, switchy defense and can create for others too.

Winslow is a sneaky good fit next to LeBron and turning the corner as a prospect. Miami knows this though, which is why they extended him. Plus L.A would be looking to bring back more for Ingram. Josh Richardson would be a good fit, but why would El Heat give him away?

New Orleans could use a gamble on high-level talent if they want Anthony Davis to resign in the not-so-distant future. The Lakers would want back Jrue Holiday, and that isn’t happening. Phoenix can offer T.J Warren, who has quietly turned into a 3-point shooter by hitting 45 percent of his 3.9 catch and shoot triples per game.  Same story, though. L.A wants more.

Brooklyn doesn’t have the pieces. Taurean Prince in Atlanta is a better theoretical fit next to LeBron, but L.A wants a star. Harrison Barnes in Dallas is shooting 40 percent from deep on just over five attempts per game. Would Cuban flip Barnes for a higher ceiling guy in Ingram? Maybe. But Barnes is not what the Lakers are looking for, despite him being a championship-winning player.

What do both of these teams have in common? Both Charlotte and Washington are Eastern Conference teams  in flux with limited ceilings and also have at least one major guard to dangle as an asset.

Washington has already made some cap-clearing moves for the future. Moving Kelly Oubre indicated that they did not want to resign the wing in restricted free agency, and more moves could come later this season. Bradley Beal would be the name to watch here.

Only 25-years-old, Beal is a career 38.9 percent 3-point shooter with a gorgeous stroke. He can defend three positions and displayed his creativity distributing for others when John Wall went down last year. With two and a half years left on contract, Beal has a ton of value right now.

Adding Ingram next to Wall is a good shake up. Plus, Washington sheds more salary which makes Wall’s ballooning contract more tolerable. The first round pick won’t be great, but it’s something. Ingram can spend more time with the ball in his hands than he would in L.A, and have a better chance at reaching his ceiling.

What would a deal to Charlotte look like? Kemba Walker has come back down to Earth from his scorching start to the season and the Hornets are barely clinging to a playoff seed. Their core is starting to look promising, as Malik Monk has improved and Miles Bridges looks like he has untapped potential. But, Charlotte must know their ceiling and the possibility that Kemba bolts after this year.

Although Kemba has cooled down, he is still cooking. His numbers are impressive, as shown below, but is advanced stats suggest he can coexist wonderfully with LeBron.

Walker is is in the 97th percentile coming off of screens this year, scoring a crazy 1.56 points per possession. He drains 36 percent of his catch and shoot treys as well, and 40 percent on all C&S opportunities. Kemba has the skill set to also ease the scoring load for LeBron, mimicking the success he and Kyrie had on the court together.

Trading for Kemba would require a wink-wink deal from Walker concerning resigning this offseason. What would Charlotte get? Wagner and Beasley would be a nice combo of expiring money and dice-roll prospects. Ingram is the key though. He would get every chance possible to grow with the ball in his hand and reach his ceiling. A protected first helps as well.

Still, these deals seem unlikely to happen this year. Charlotte has not shown any desire to tank and probably desires a playoff appearance. Washington may sell of Beal, but a better deal could be out there. Regardless, keep and eye on Ingram as he could be the key to another Lakers superteam.