Spies everywhere! Eagles are used to it... 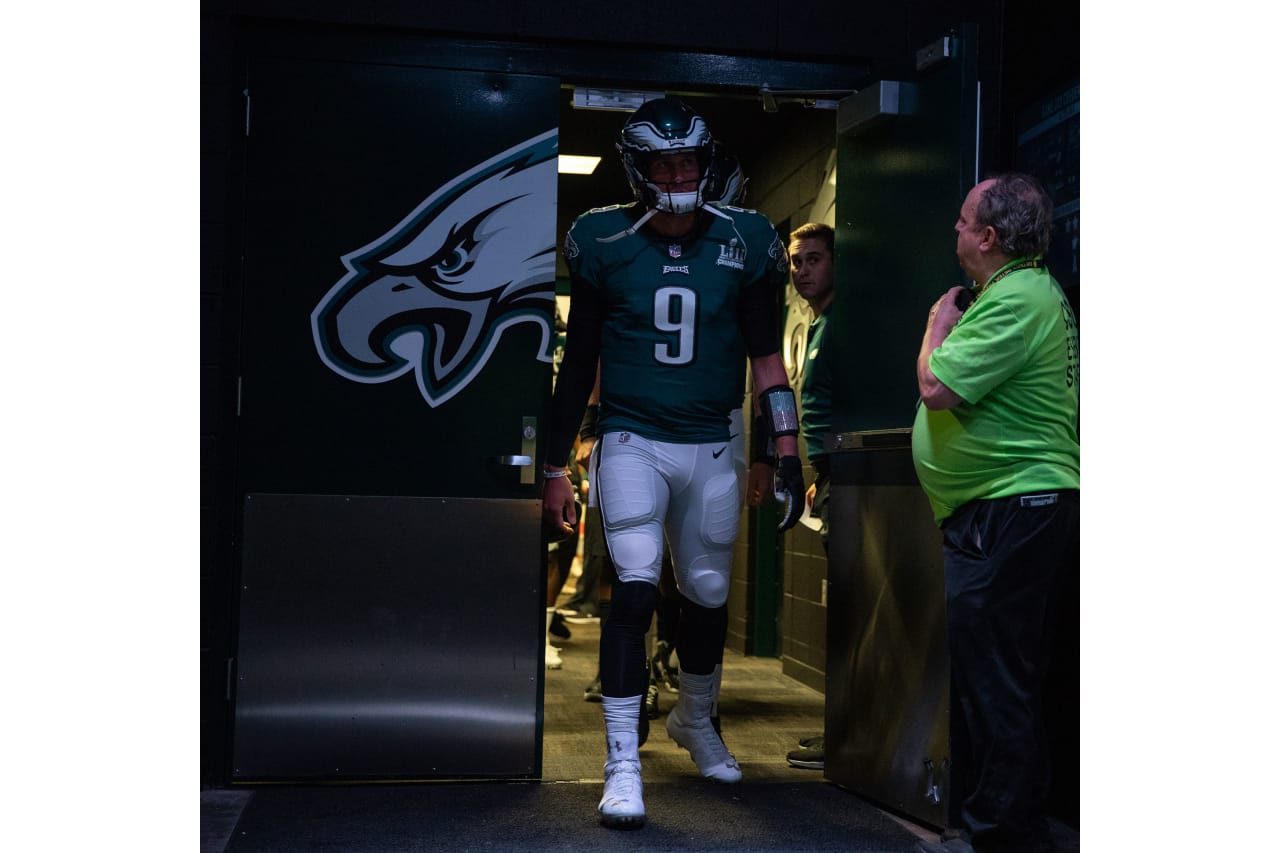 Spies everywhere! Eagles are used to it...

Before I get into “Spy vs. Spy” stuff, I should address the elephant in the room (er, Nick Foles and the alleged “franchise tag” [with intent to trade])…

Dave Spadaro put out an interesting column at PE.com where he reminds us how often the Eagles have actually applied the franchise tag or transition tag, and it certainly jogged my memory:

February 21, 2002: The Eagles used the franchise tag on linebacker Jeremiah Trotter and then rescinded it on April 5. Two weeks later, Trotter signed a seven-year contract with Washington. It was a tumultuous time for the Eagles and for Trotter, who made the Pro Bowl after the 2000 and 2001 seasons. He objected to the use of the franchise tag, had a vocal run-in with head coach Andy Reid at the NovaCare Complex over the decision and then signed quickly with Washington once he had free agency freedom.

February 10, 2005: Having just suffered a heartbreaking loss in Super Bowl XXXIX to New England, the Eagles used the franchise tag on defensive tackle Corey Simon, a standout along the line of scrimmage and a former first-round draft pick. It was the start of an incredibly rocky season-after for the Eagles. Well, Simon didn’t like being tagged, and he didn’t sign the one-year contract. The Eagles rescinded the tag on August 25 and Simon signed a five-year contract with Indianapolis on September 1.

February 7, 2008: The Eagles used the franchise tag on tight end L.J. Smith, who was limited to 22 receptions, 236 yards, and a touchdown the previous season due to injury. Quarterback Donovan McNabb wanted Smith back and the Eagles wanted him back, so they used the franchise tag on Smith and he signed the deal and looked forward to big things in the Philadelphia offense for the 2008 season. Smith made $4.52 million that season and caught 37 passes for 298 yards and three touchdowns. He played the next season, his last in the NFL, with the Baltimore Ravens and caught two passes in 12 games.

February 15, 2011: The Eagles used the transition tag on placekicker David Akers as the league went into a work stoppage and when it ended, Akers signed a three-year contract with San Francisco. The Eagles had used a fourth-round draft pick on Alex Henery and turned the kicking game over to the rookie, who was outstanding for two seasons before slipping in his third year with the Eagles.

February 15, 2011: The Eagles used the franchise tag on quarterback Michael Vick (as the league began its work stoppage) to protect their rights to him. Prior to the start of the regular season, the Eagles signed Vick to a six-year contract extension. Vick played three seasons on the deal before the Eagles moved on at the position under then-head coach Chip Kelly.

March 1, 2012: The Eagles used the franchise tag on wide receiver DeSean Jackson and then signed him to a five-year contract extension prior to the regular season. Jackson, obviously, had a major impact with the Eagles, including 82 receptions for 1,332 yards and nine scores in a Pro Bowl season in 2013, but Kelly decided to move on from Jackson as the Eagles released Jackson in March 2014.

Guess what Spadaro’s gist of the story is? “The franchise tag is a guarantee of nothing and the end result is often far away from the original intention.”

He’s right. Deal with it, BORED members. Next!

Another hot topic is “should the Eagles cut veteran LT Jason Peters?”

STINE’s regular chat group is all over this one:

GPARM: “Cutting Peters doesn’t make sense, he still played at a pro-bowl level.  He had some downs where he got beat early, when he was dealing with multiple injuries, and yes it sucks that he doesn’t always stay in through every game, but there is no better option in free-agency, and we already have a guy that has all of the tools to be one of the best EVER, so drafting a Tackle would just be dumb right now.  A guard absolutely!  CB, okay, but he better be a dominant CB right off the bat.  S, of course, LB yeah an upgrade there could transform our defense, we definitely need one to stay healthy, but idk if our defense is built to have a dominant game changing LB, but if we can, wow.

“BUT, to get back to Peters, the only way we don’t bring him back is IF we draft a top prospect in the first round.  Doing so means we have no faith in Mailata and we wasted a bunch of our resources for nothing, that’s just how our team operates.  Whether you believe in Peters or not, this team and its players do!  Oh, and the only other reason we don’t bring him back is because we are certain Mailata is ready this year.  I think it’s more likely we let him compete for the job alongside the HOF player.”
ROBERT THE TIRE: “Cutting Peters has to happen, letting emotions over-ride your brain is when you get into a bind and then try to over-compensate to fix it. Look at what they’re trying to do with Foles! That started because of emotion, and could possibly end in trying to over-compensate for it.”

Meh, it’s all good hot-stove banter, but sometimes we forget what the team tells us and what they really believe in the front office are two different things.

Let it be. Let it play out. Don’t worry, be happy.

Now for that SPY thing…Many of us believe the 2004/05 Eagles were the victims of a classic Spygate controversy involving the Patriots in Super Bowl 39. Even today it would be tough to prove, but there is a ton of anecdotal evidence.

Today we are used to spying and spies everywhere. Especially here, where many a syndicated columnist has picked the brains of our BORED members and leaders and harvested their comments. But back in February 2005, it was a shocking allegation.

Let me alleviate some of that shame and outrage, Eagles fans. Spying on your opponent before a championship game turns out to be an NFL tradition that goes all the way back to the 1958 “Greatest Game Ever Played.”

Even before that, George Halas, owner-coach of the Chicago Bears, was known to have bugged visitor locker rooms and to have tapped bench-to-press-box telephone lines.

But prior to the 1958 NFL Championship Game between the Giants and the Colts, nobody had actually been hired to spy on an opponent’s game plan.

It was Weeb Ewbank’s assistant coach and scout Bob Shaw, a 6-foot-five former all-America end at Ohio State who had played professionally for the Rams and Cardinals. Colts owner Carroll Rosenbloom encouraged Shaw to spy on the Giants’ practice sessions in Yankee Stadium. Rosenbloom assured the somewhat nervous Shaw that even if he were caught, Shaw would have a great job forever in any one of Rosenbloom’s many companies.

Shaw took binoculars and went to the top of the apartment building overlooking the right-centerfield wall of Yankee Stadium. And on that one day in Christmas week of 1958, he became the first Spy of the modern NFL era. Amazingly, he had little to report for his efforts—the only thing the Giants were running differently from previous film was a double halfback reverse, a gadget play to feature Frank Gifford. Everything else Shaw observed was the same stuff the Giants had run all season. But even that little information was valuable to the Colts, as it gave Weeb Ewbank the comfort zone of confidence that the Giants would not be redesigning their defense or inserting a bunch of new formations on offense.

By the way, Shaw went on to become a high school, college and coaching success. At a prep school gig in New Mexico he coached a young Roger Staubach. In the ultimate odd twist, he was hired by the New York Yankees and George Steinbrenner as a baseball scout.

Spies are people too.