Projecting the runners and catchers at Eagles OTAs 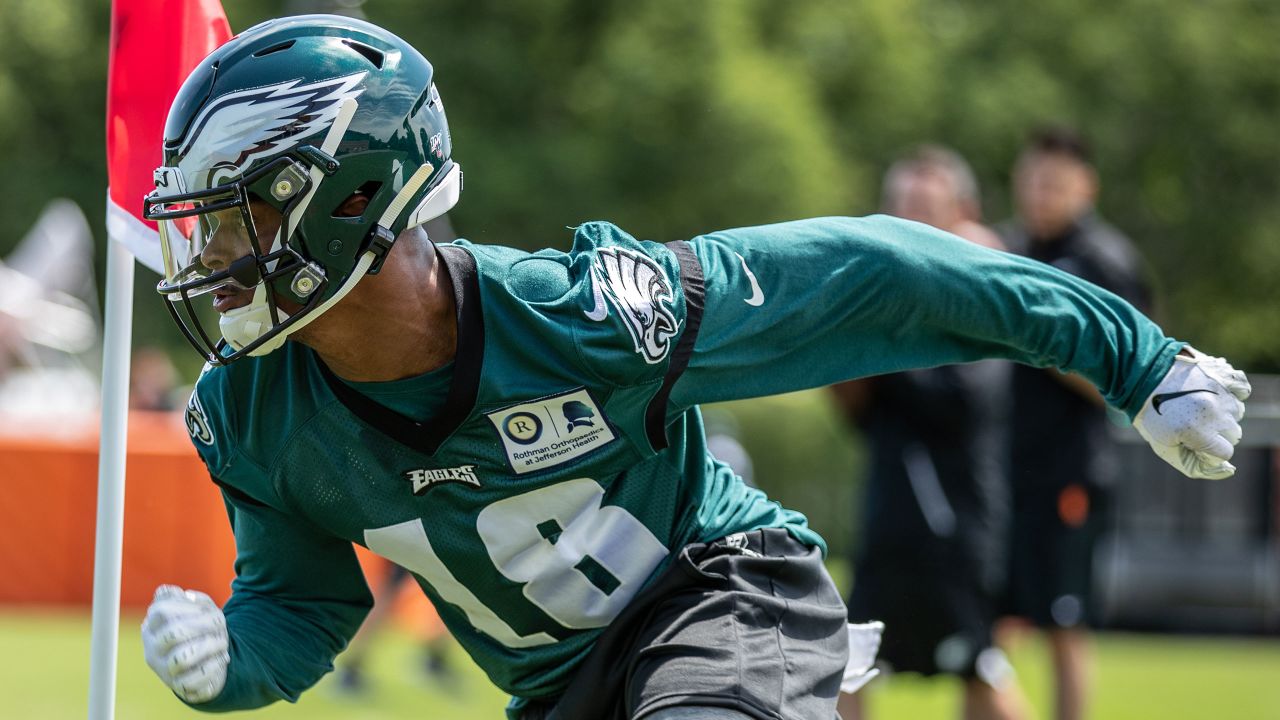 Projecting the runners and catchers at Eagles OTAs

The biggest positional logjams in Eagles OTA roster projections are locked down on running back and wide receiver.

“The top two are total locks. The Eagles traded for Howard, who is third in the NFL in rushing yards over the last three seasons. And they drafted Sanders in the second round. Neither of them are going anywhere. And as long as Clement is healthy — he’s still recovering from a knee injury that ended his 2018 season early — I expect him to be back on the roster. He had a promising 2017 season and was a hero in Super Bowl LII.  ”

It seems likely the Eagles are going to carry four running backs. They kept four coming out of training camp last year and have held four for most of the time under Doug Pederson. In 2017, they came out of camp with five, but that was because they forced Donnel Pumphrey on the roster for a short time. Count on four this year.

Wendell Smallwood: Go ahead and count out Smallwood at your own peril. This guy has been cut by fans and media members for a couple years now and it still hasn’t happened. No, he’s never thrived in the feature role, but he’s been fairly productive in three years after being taken in the fifth round. In fact, 2018 was his most productive year yet. He had 364 yards on the ground with three touchdowns and an average of 4.2 yards per carry. He also caught 28 balls and had two receiving touchdowns. He can do a little bit of everything, including returning kicks. I’d list him as the favorite for now.

Josh Adams: Pretty strange rookie season for Josh Adams. He didn’t make the initial 53-man roster but then ended up leading the team in rushing before basically getting benched in the playoffs. We found out he had a shoulder injury and had offseason surgery, so maybe that was part of the reason. He isn’t practicing yet. The problem with Adams might be his lack of versatility. He caught just seven passes last year and is probably better suited for first and second downs, which is when Howard or Sanders will be on the field. He also hasn’t been a return man.

Boston Scott: Scott is certainly interesting. It’s hard to look at the 5-foot-6 running back and not think of Darren Sproles. Scott joined the Eagles in December, so this will be his first offseason with the team. He was a sixth-round pick by the Saints out of Louisiana Tech last year. If the Eagles want someone to fill that Sproles role of a pass catcher out of the backfield, maybe that’s Scott. Although he didn’t catch the ball a ton in college, he seems pretty smooth doing it. He might also be able to punt return, but he didn’t do that in college either. Some projection with him, but we’ll see what he can do this summer.

Donnel Pumphrey: The fourth-round pick from a couple years ago is back on the Eagles’ roster, but is a dark horse for this job. He’d need to really impress this spring and summer. But just last training camp, he really had a legitimate chance to make the team before he got hurt and Smallwood stayed healthy. I don’t like his chances, but they might be a tad higher than you’d think, in that they’re non-zero.

“I don’t think there’s much arguing with these four. Sure, maybe Agholor gets traded, but I think it’s unlikely at this point and if he doesn’t get dealt, he’s clearly on the roster. And JJAW was a second-rounder; he’s making the team.”

“After keeping five receivers out of camp in 2016, the Eagles have kept six in each of the past two seasons at initial cuts. My guess would be they go with six again. (Just to see how far they’ve come, the five they kept initially in 2016 were Jordan Matthews, Agholor, Josh Huff, Dorial Green-Beckham and Paul Turner.)

Mack Hollins: I think Hollins will make the roster if he can just get on the field. That hasn’t been easy for him. It’s been an unusually long rehab. He wasn’t even on the field for the start of OTAs earlier this week, which seems crazy. But if he does return, he’s a really good special teams contributor and was a fourth-round pick a couple years ago. He had a promising rookie season too, catching 16 passes for 226 yards and a touchdown.

Shelton Gibson: On one hand, he’s a really good gunner on the punt team. On the other hand, the Eagles desperately needed a speed receiver last year and he still couldn’t get on the field. His over-hyped training camp last year didn’t translate into productivity or even snaps when the games mattered. His one catch in 2018 was a 48-yarder.

Charles Johnson: Most recently, Johnson was the top receiver in the now-defunct AAF, but the 30-year-old has been around pro football for a while. He was a seventh-round pick in 2013. It might seem strange to keep a 30-year-old dude as a deep reserve/special teamer, but Johnson did get a few first-team reps during Tuesday’s practice in the absence of Jeffery.

Braxton Miller: Miller joined the Eagles’ practice squad in early September and stayed there the rest of last year. A former third-round pick and big-name college quarterback at Ohio State, Miller is certainly intriguing. He could catch the eye of Pederson as a gadgety-type player and maybe a returner. Pederson has talked Miller up some this offseason.

Greg Ward: Like Miller, Ward is a former college quarterback (Houston) still making the transition to receiver. His time with the Eagles dates back to 2017, but he also played in the AAF. The Eagles brought him back again this offseason, though it seems like Miller is the new favorite project.

DeAndre Thompkins: The rookie from Penn State got a nice chunk of change to come to the Eagles and is intriguing because of his speed and his potential as a punt returner. But Thompkins had a problem with drops in college and might be more of a longer-term project. Maybe a practice squad guy.

Marken Michel: The brother of NFL running back Sony Michel, Marken Michel went to the Calgary Stampeders in the CFL after he didn’t make the Vikings’ roster in 2016. He was the CFL West Division Rookie of the Year in 2017.

Carlton Agudosi: The Rutgers’ product is 6-6, 220 pounds, so he definitely stands out on the field. He didn’t put up big numbers in college but spent some time on the Cardinals’ practice squad in 2017. “