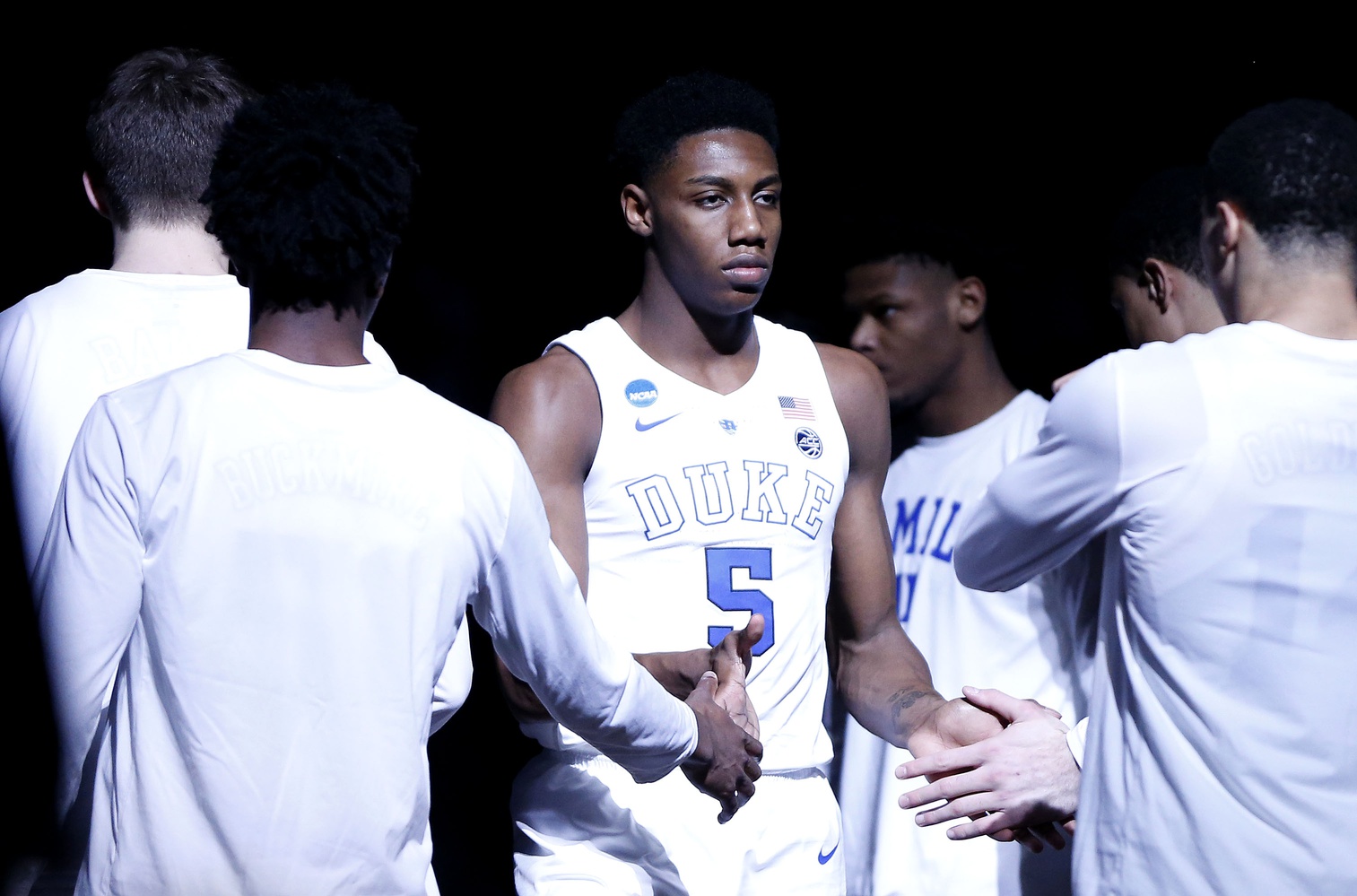 Barrett’s success on the international stage and at the high school level, combined with his impressive counting stats, have helped him avoid a free-fall heading into the 2019 NBA Draft. Nevertheless, there are myriad questions about his game going forward.

To start with the floor, or better yet the basement, one can view Barrett as a much bigger version of Dion Waiters, who never met a shot he didn’t like. Visions of Waiters waving his arms around frantically for the rock while sharing the court with superstars Kevin Durant and Russell Westbrook in OKC remain seared into my brain. And that’s the same level of self-awareness that Barrett showcased for the vast majority of his freshman season. The fact that R.J. averaged five more shots per game than Zion Williamson speaks to his selfish tendencies. I mean, imagine believing you should take five more shots per game than a teammate of yours who maintained a 68 percent mark from the field (compared to 45 for R.J.).

During the preseason and early portion of the schedule, perhaps it made some sense that Barrett believed himself to be the better player, but by the end of the year there should have been no doubt in his mind that he needed to take a step back offensively in favor of Zion. That he never truly figured that out fills me with my concern about his ability to exist on a winning team at the next level. It seems in my opinion that he’s much more likely to be a guy who puts up stats on less-than-stellar squads, which brings me to my next comparison: Monta Ellis.

Barrett isn’t as explosive an athlete as Ellis was, though Barrett’s athleticism may be a tad bit underrated. Barrett does boast a significant size advantage. Still, I fear Barrett will be just as delusional about his abilities as Ellis while operating primarily in the mid-range and closer, thus limiting his effectiveness overall unless he drastically improves his passing and finishing around the rim. Barrett does have a pretty floater and got to the cup fairly frequently at the college level, but I wonder whether that’ll still be the case in the big league.

Prior to the Kevin Durant’s injury and Kyrie Irving’s apparent commitment to Brooklyn, the Andrew Wiggins comparison made some sense as well. Wiggins was essentially drafted as trade bait by Cleveland and then shipped to Minnesota in exchange for Kevin Love, and the fellow Canadian was among the most hyped players coming out of high school in recent memory. Barrett has shown himself to be a better passer/playmaker/ball-handler than Wiggins, but there’s no guarantee he’ll be as good as Wiggins on defense or from beyond the arc (not that Wiggins excels in those areas either).

The fourth and final comparison I’ve got is a fellow lefty who shot the heck out of the ball for the Milwaukee Bucks but is mostly a forgotten name these days: Michael Redd. Redd and Wiggins are much closer to Barrett in terms of size than Waiters and Ellis, but of course Barrett will need to make massive improvements as a shooter to be truly worthy of the Redd comp.

Barrett did show some improvement as a passer as the season went on, at least to the point where I think it’s safer to project him as an Ellis-type creator  (4.6 dimes per game across 12 seasons in his career) as opposed to a total black hole (Waiters) or strict bucket-getters (Wiggins and Redd). Still, Michael Redd minus the chopper with Monta’s passing ability isn’t much to get excited about, so finding some consistency with the jumper will be huge, as will showing the willingness to prioritize defense.

If Barrett can take a little bit away from each of those four guys, he could ultimately be worth his high selection on draft day. With that being said, I’d feel much more comfortable about betting on Jarrett Culver based on his theoretical offensive and defensive versatility and two-way upside.