Searching for meaning of Eagles 34-27 win over Packers 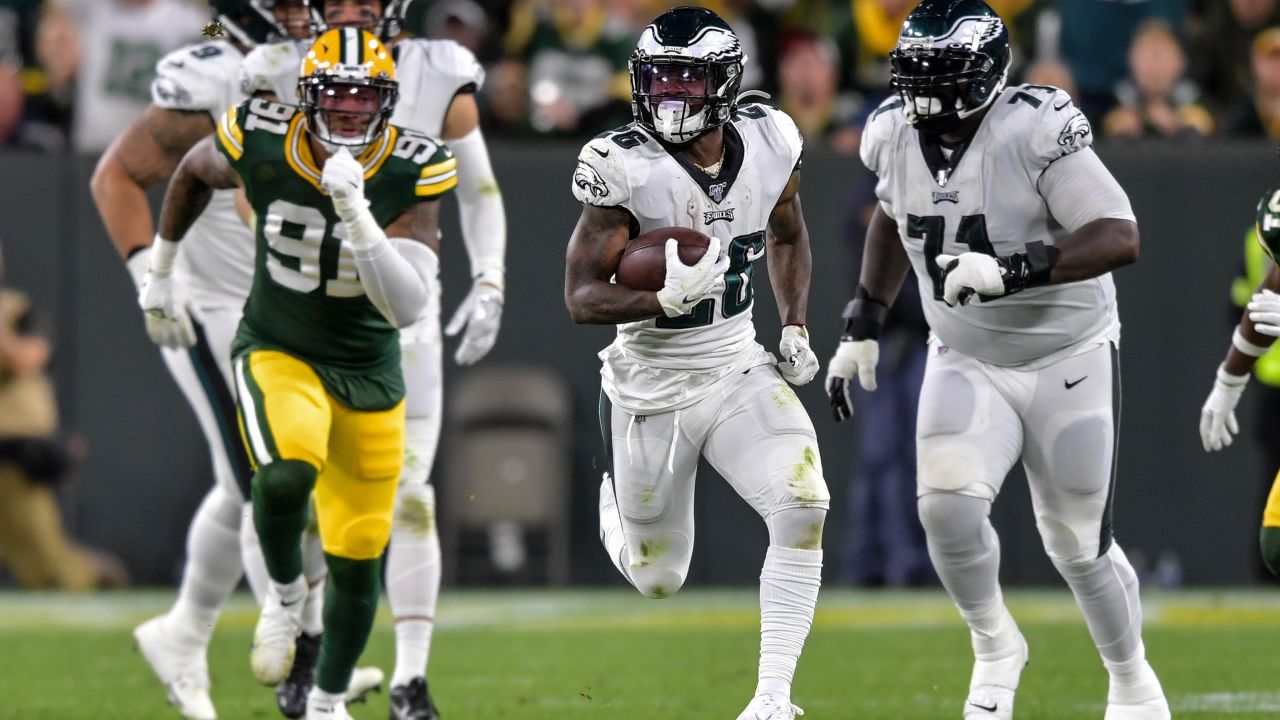 Searching for meaning of Eagles 34-27 win over Packers

What a hard-fought gritty game…both teams suffered severe casualties, you almost have to wonder if the “cost” of this Eagles win was worth the value of the win…

But the Eagles avoided sinking further into an early-season hole by pulling off a win on the road on a short week against a hot opponent.

Of all people, it was Craig James to the rescue at the end. One snap at corner for James with the game on the line and Aaron Freakin’ Rodgers gunning for you in the red zone. What could go wrong?

Craaaigg came through, although technically he may have gotten away with a slightly early contact with the receiver on the play. He was the last healthy corner available by the end of the 4th quarter, literally the last line of defense in this slugfest.

In the final account, Nigel Bradham picked off Aaron Rodgers‘ pass deflected by James in the end zone with 20 seconds left, Jordan Howard gashed Green Bay for his second career three-touchdown game and the Philadelphia Eagles ended a two-game losing streak with a 34-27 victory over the Packers on Thursday night.

Perhaps most notable, the Eagles offensive line (with great blocking chipped in by TE Dallas Goedert) would be the ultimate difference-maker.

Howard finished with 87 yards on 15 carries and two touchdowns rushing and one receiving, Carson Wentz went 16 for 27 for 160 yards, three scores and no turnovers, and the Eagles (2-2) rebounded after losing consecutive games by a combined seven points.

Rodgers started 10 for 10 and finished 34 for 53 for 422 yards, two touchdowns and a fumble that set up a short Philadelphia scoring drive.

Davante Adams had a career-high 180 yards on 10 catches for Green Bay, but he wasn’t on the field for the Packers (3-1) on the last drive because of a toe injury.

After punting on its first two drives and falling behind 10-0, Philadelphia scored on four straight possessions against a defense that had only given up 35 points through the first three games.

Sacked six times in the previous two games, Wentz managed to stay clean throughout most of the game. Zach Ertz had a team-high seven catches for 65 yards, and Alshon Jeffery, who missed all but six snaps over the past two weeks with a calf injury, finished with 38 yards and a touchdown on three catches.

Running back Jamaal Williams caught a pass from Rodgers for no gain and was leveled by defensive Derek Barnett on Green Bay’s first play from scrimmage. Williams was wheeled off on a stretcher and did not return. Barnett was hit with an unnecessary roughness penalty. Williams was being evaluated for head and neck injuries. The Packers said Williams had feeling in his extremities.

Williams turned out to be the first of a plethora of injuries on the night for both teams. Eagles cornerback Avonte Maddox was carted off the field on a stretcher late in the fourth quarter.

Rodgers and Adams connected on a 58-yard completion on the opening drive. It was the longest play of the season for Green Bay, who continued its trend of hot starts. Aaron Jones scored from 3 yards out two plays later to give the Packers the early lead.

Mason Crosby added a field goal in the beginning of the second quarter to make it 10-0.

The Eagles finally got a little momentum on a 67-yard return by Miles Sanders on the ensuing kickoff. The return set up a 6-yard score by Jeffery.

Rodgers and Adams linked up again for a 40-yard gain on the next drive, which again ended in a field goal for Green Bay to give the Packers a 13-7 lead.

Wentz found tight end Dallas Goedert for a 3-yard touchdown strike. The score gave the Eagles a 14-13 lead just before the two-minute warning.

Rodgers fumbled on the following drive after a strip-sack by Barnett. The Eagles capitalized with 1-yard score by Howard. Howard’s touchdown made it 21-13 with 54 seconds to go.

Rodgers needed just 50 seconds to lead the Packers 70 yards. The two-time MVP found Geronimo Allison for a 31-yard gain, and the pair linked up for a 19-yard touchdown to make it 21-20 at the half.

The Eagles opened the second half with a 20-yard score from Wentz to Howard. After a failed two-point conversion attempt, Philadelphia led 27-20.

Jimmy Graham got his first catch and score since Week 1. Graham had six catches for 61 yards and a 14-yard touchdown that tied the game at 27-27 with 3:16 to go in the third.

Howard scored his third touchdown on a 2-yard run that made it 34-27 at the start of the fourth.

The Eagles picked up the win despite committing nine penalties for 93 yards.

Eagles: CB Sidney Jones suffered a hamstring injury and did not return. That leaves Philadelphia with only two healthy cornerbacks — Rasul Douglas and Craig James — on the roster. That’s because Avonte Maddox (who had an up-and-down night in coverage, mostly down) got annihilated on a tackle by a blindside hit from his own teammate (Sendejo) and got knocked out. Maddox had to be stabilized and stretchered off, a very somber moment. Preliminary reports are Maddox can move all his extremities and is alert, but of course will be hospitalized for observation.

EYE also noted Fletcher Cox aggravated something, possibly his chronic toe and hopefully nothing more (Cox returned to the game). Alshon Jeffery appeared to be favoring his sore calf on a couple of plays.

Packers: As noted, RB Jamaal Williams was knocked out and was hospitalized for concussion evaluation. CB Tony Brown suffered a hamstring injury and did not return. RT Bryan Bulaga left with a shoulder injury. He also did not return. S Will Redmond was being evaluated for a concussion. CB Kevin King suffered a groin injury. Adams suffered an injured toe.

Geez, I don’t know if this game result means a whole lot in the bigger picture. Our defense is a raggedy bunch right now. I am concerned the “bend but don’t break” concept even applies here. Thankfully the offensive line just plowed away at the clock with that ground game. We rarely see so many big running lanes opened up like that. Did the Packers just have a lousy defensive plan against us with horrible run-contain on a bad night for them, or are we finally clicking on offense? One thing’s for sure, Luck was a Lady for the Philly defense in Green Bay. Maybe the mini-bye will bring much-needed replacement  help there for so many wounded players.