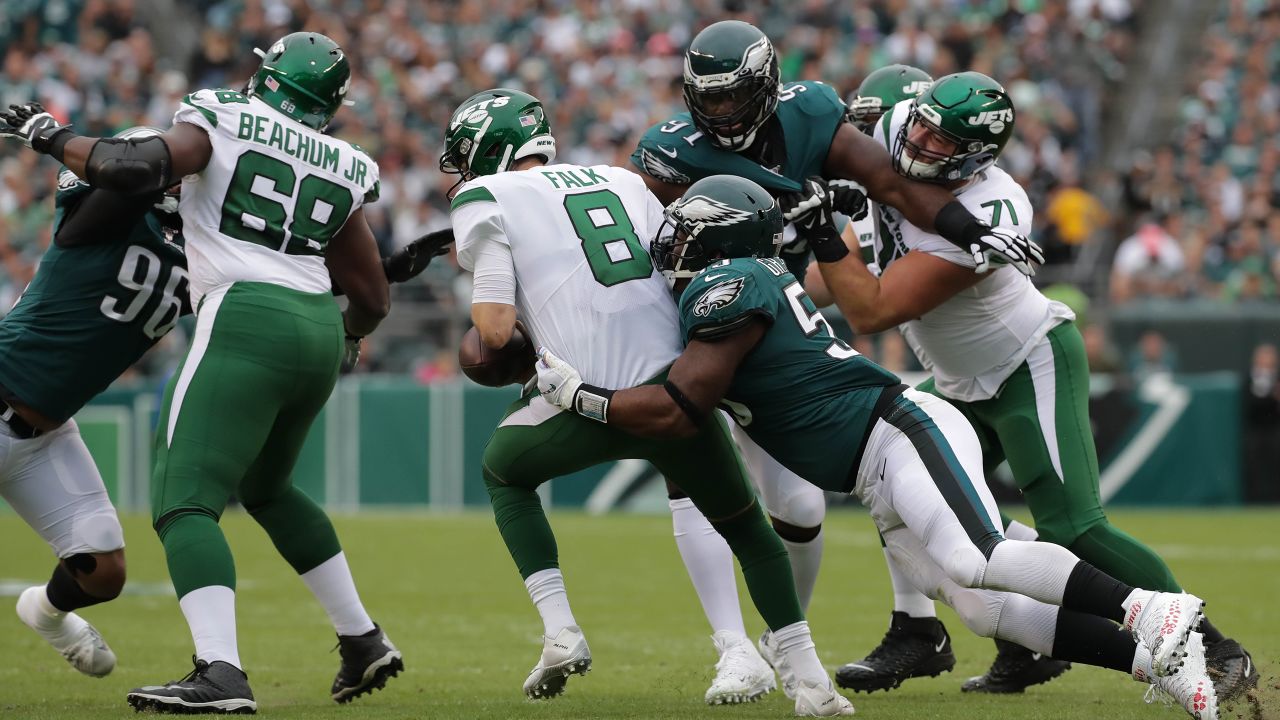 EYE say “disturbing” because our offense and special teams were somewhat lamed by lousy execution and penalty mistakes. Think you’re gonna have to play a much cleaner and crisper, dare I say more innovative game on offense to keep up with teams better than the Jets. True, there was no reason for Doug Pederson to open up the playbook too much against the NYJ, considering how unbelievably awful the Jets’ offensive line really turned out to be on this gloomy Sunday afternoon.

We won with our “C” game on offense and our “B+” game on defense. And I’m grading on a curve.

Nate Gerry returned an interception for a score , Orlando Scandrick took a strip-sack the distance and Philadelphia routed the New York Jets 31-6 on Sunday.

“Our defense carried us,” Howard said.

Brandon Graham had a career-high three of Philadelphia’s 10 sacks after he only had four last season. The performance was reminiscent of Buddy Ryan’s old defense led by Reggie White in the late 1980s. That unit was called the “Gang Green” defense, which has been the Jets’ team nickname for years.

“We finally got them sacks in a big way,” Graham said.

True…but look at the garbage pass-protect motley crew they were going against. Eeek—the Jets are off the charts bad in the offensive line cast of characters they are putting out there. Shameful…

Sam Darnold missed his third straight game for the Jets (0-4) while he recovers from mononucleosis, so Falk made his second start after opening the season on New York’s practice squad. Falk threw two interceptions and was sacked nine times before leaving late in the game and being replaced by David Fales, who was re-signed by the Jets on Friday. Falk replaced Trevor Siemian — Darnold’s original backup — after he sustained a season-ending ankle injury in Week 2.

“I’m not going to make excuses. I have to perform better,” said Falk, who didn’t get snaps with the starters until Friday because the Jets hoped Darnold would be cleared to play. That in itself is an indictment of Jets HC Adam Gase. Is he even trying to win?

Gerry gave the Eagles a 14-0 lead in the first quarter when he jumped in front of Falk’s fourth-down pass and returned it 51 yards.

“Where we want to be as a team, the defense has to set the standard,” Gerry said.

Scandrick, playing his first game with the Eagles, had two sacks on corner blitzes. He stole the ball from Falk on the second one and ran it back 44 yards to make it 31-6 in the fourth quarter.

“I was just finishing the play and not being satisfied with the sack,” Scandrick said about ripping the ball out of Falk’s hands.

The defense dominated the Jets from the start, holding an opponent to no points on an opening drive for the first time this season.

But the Eagles couldn’t get anything going on their next four possessions until Rodney McLeod returned an interception 23 yards to the Jets 42 late in the second quarter.

Wentz then fired an 11-yard TD pass to Zach Ertz for a 21-0 halftime lead.

The Jets snapped the shutout after Corey Clement muffed a punt and Trenton Cannon recovered at the Eagles 19. Clement thought the punt had bounced off Ryan Lewis’ leg. Wrong. He should have let it bounce.

Vyncint Smith scored on an end-around on the next play, but the 2-point conversion failed. That was New York’s second offensive touchdown this season and first since Week 1.

INJURIES: Jets: LB C.J. Mosley missed his third straight game with a groin injury and LG Kelechi Osemele was out with shoulder/knee injuries. … Falk cleared concussion protocol after a hit late in the game.

Eagles: Sproles left with a quad injury in the second half.

PHI
Z. Ertz5 REC, 57 YDS, 1 TD
At least give DC Jim Schwartz some major credit for fitting latecomer CB Orlando Scandrick into a nickel blitz scheme which Scandrick had trademarked in his many years with Dallas. To me that was the “Coaching Play of the Game”. Nice preparation by Schwartz on short notice…
On the flip side, Philly’s next opponent is Minnesota, then Dallas.[Thanks for correction by our home-run leader!] They’ll be ready for that particular wrinkle in Schwartz’ game plan.