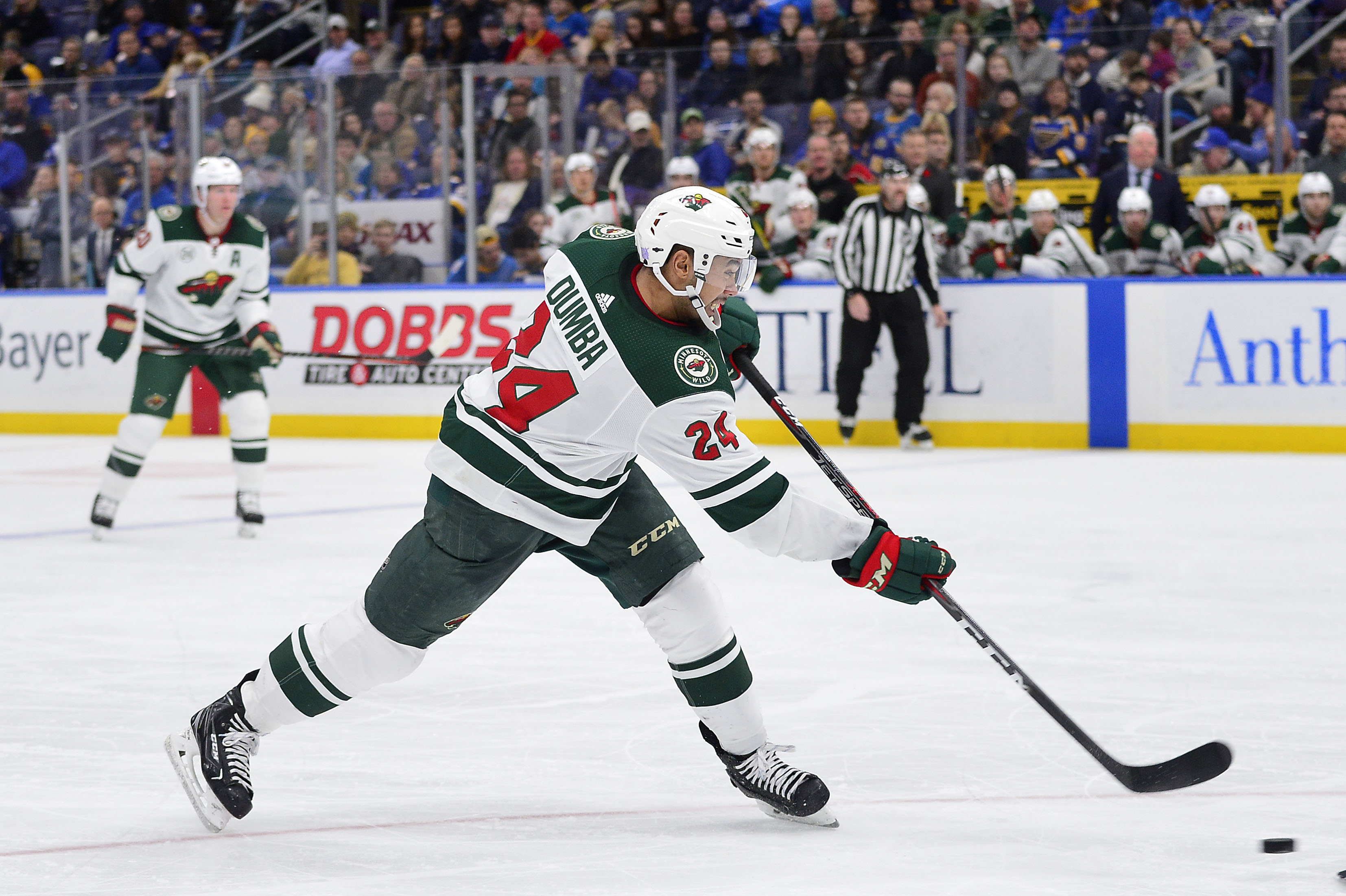 Runaway Train was the hit song of St. Cloud-based alternative rock band Soul Asylum.  Minnesota Wild Head Coach Bruce Boudreau described his clubs squandering of a 3-0 lead to lose 6-3 to Dallas last night as getting hit by a ‘runaway train.’  The Wild got a 3-goal lead and then simply stopped skating and the hibernating Dallas Stars offense would awaken and blitz Minnesota for 6 unanswered goals.

Waiting in St. Louis for the Wild are the Blues who had a bit of an up and down start to their season after having won the Stanley Cup.  The roller coaster start is kind of a normal thing for St. Louis and they still have a fairly young, deep team.  Can the Minnesota Wild earn a win against a Vladimir Tarasenko-less Blues team or will they get ran over by the ‘Runaway Train’ again?

1st Period Thoughts:  Minnesota had good pace and energy to start the game as their forecheck was forcing some turnovers in the Blues’ zone as Joel Eriksson Ek intercepted a pass and then fired a shot on goal that was gloved by Jordan Binnington.  The Wild would draw the first penalty of the game as Sammy Blais held up Mats Zuccarello for an interference call giving Minnesota a power play.  On the power play, the Wild had good possession and puck movement as they set up Matt Dumba and Brad Hunt for a number of shots from the perimeter that had penalty killers ducking out of the way.  It took nearly a minute and a half before the Blues were able to clear the zone and Minnesota would come up empty on the power play.  The Blues would try to assert itself offensively as Jaden Schwartz tried setting up Robert Thomas who fired a shot high and wide of the Minnesota goal.  St. Louis’ Ryan O’Reilly turned a puck over in neutral ice and was able to create a 2-on-1 that looked promising but Jared Spurgeon would disrupt the pass and Minnesota was able to escort the puck out of the zone without incident.  The Wild would get a great opportunity of their own as Colton Parayko made a poor choice that left Kevin Fiala with plenty of space to work with and the Swiss-winger would skate in and rip a shot high and wide of the goal.  A few minutes later, the Wild had a potential 2-on-1 as Mikko Koivu entered the zone but instead of passing it to a wide open Marcus Foligno, he waited and the Blues defender was able to poke away the puck and Minnesota didn’t even get a shot off on the sequence.  A slashing call Jason Zucker put the Blues on the power play.  Brayden Schenn would deflect a point shot that Devan Dubnyk just got a part of his glove on to make it go up into the netting above the glass for a whistle.  The Blues were patient and confident on the man advantage.  Minnesota’s penalty killers did a good job in the latter half of the penalty to pressure the puck carrier and even force a few turnovers in the process.  As the Wild penalty expired, a blocked shot by Foligno turned into a partial 2-on-1 between him and Eriksson Ek.  Foligno would fire a shot on goal that Binnington knocked down and unfortunately Eriksson Ek couldn’t pounce on the rebound.  Minnesota tried to finish the period by being extra careful defensively which prompted the Blues to press the attack in the last minute and half.  The period would end with both teams still knotted at 0-0, but Minnesota missed some great opportunities to strike first.

2nd Period Thoughts:  Time and space was hard to come by in the 2nd period as both clubs were hoping to take advantage of some kind of mistake.  Eric Staal would get tagged with a tripping penalty giving the Blues the man advantage.  David Perron and O’Reilly were doing a good job at setting up opportunities as the Blues appeared to be circling closer and closer to the Wild crease.  Minnesota would get the big kill and try to go back on the attack.  It wasn’t much of an attack as it was a search for good luck and that the Blues would gift wrap a scoring chance.  The Wild were just clearing the zone without any thought to an outlet pass which invited the Blues to continue to attack.  Sammy Blais would skate in and rifle a shot over the shoulder on the glove side by Dubnyk.  1-0 Blues.  The goal woke up the sellout St. Louis crowd.  Minnesota would answer back as Mats Zuccarello with his first goal as a member of the Wild on a nice set up by Staal.  1-1 game and the St. Louis crowd went back to sleep.  The next few minutes the teams went back to playing tight defense.  The Blues would take back the lead as O’Reilly ripped shot by Dubnyk but the play would be challenged by the Wild for being offsides.  The replay seemed to show a pretty clear offsides call that was missed and the goal was waived off.  Good challenge by the Wild.  Still 1-1.  The Wild would get a power play late in the period but they were too nonchalant with the puck and were never ever able to really sustain much in the way of offensive pressure.  Beyond a point shot by Ryan Suter that was be steered aside with ease by Binnington the Wild mostly just skated around the perimeter of the Blues’ zone.  Schwartz was tripped up by Hartman to give the Blues another power play.  St. Louis moved the puck in close to the Wild crease and were narrowly thwarted by a few well-timed poke checks.  Minnesota flirted with danger as they just couldn’t clear the zone.  The Wild would counter with some strong work by Staal to set up Hunt for a blast that was absorbed by Binnington.

3rd Period Thoughts:  The Blues would take the lead early in the period as Perron found Alex Pietrangelo mostly alone on the back door and he made a deke to get Dubnyk to flop before going top shelf.  2-1 Blues.  The Blues kept applying pressure and Wild just appeared dead-legged and overwhelmed by St. Louis’ speed.  When the Wild looked to go on the attack, St. Louis sat back in a 1-2-2 trap and just waited for Minnesota to cough up the biscuit.  The chippy play started to emerge as scrums after the whistle began to be a regular occurrence.  Luke Kunin got a great chance near the crease but Binnington was able to block it aside.  The Blues were more than happy to let the Wild over commit offensively and then counter attack.  At times the Wild were guilty of overhandling the puck instead of taking the simple play the Blues were giving them.  Matt Dumba would get set up in the slot but his shot was blocked away by Binnington.  A classic example of the Wild over passing the puck, Victor Rask dropped a pass back to Jordan Greenway who had a great chance to send a shot on goal but instead he tries to thread a cross-ice pass to Ryan Hartman and misses the mark and no shot taken.  Make no mistake, the Wild were hustling and giving all they had but simply couldn’t generate enough shots to really push the Blues through the closing minutes of the period.  A long shot by Zuccarello would be knocked down and covered up by Binnington with a host of Wild forwards near his crease.  Minnesota would take a timeout with 1:00 left in the game hoping to rest up its veterans for one final push.  The Blues were content to let Ryan Suter be the trigger man at the point for the Wild as his weak shots were easy to redirect and keep away from Binnington and the Blues would prevail 2-1.

~ Crease And Assist: A Legally Compliant Minnesota Hockey Blog would like to send our condolences to the family of long-time NHL executive Jim Gregory who passed away at the age of 83.